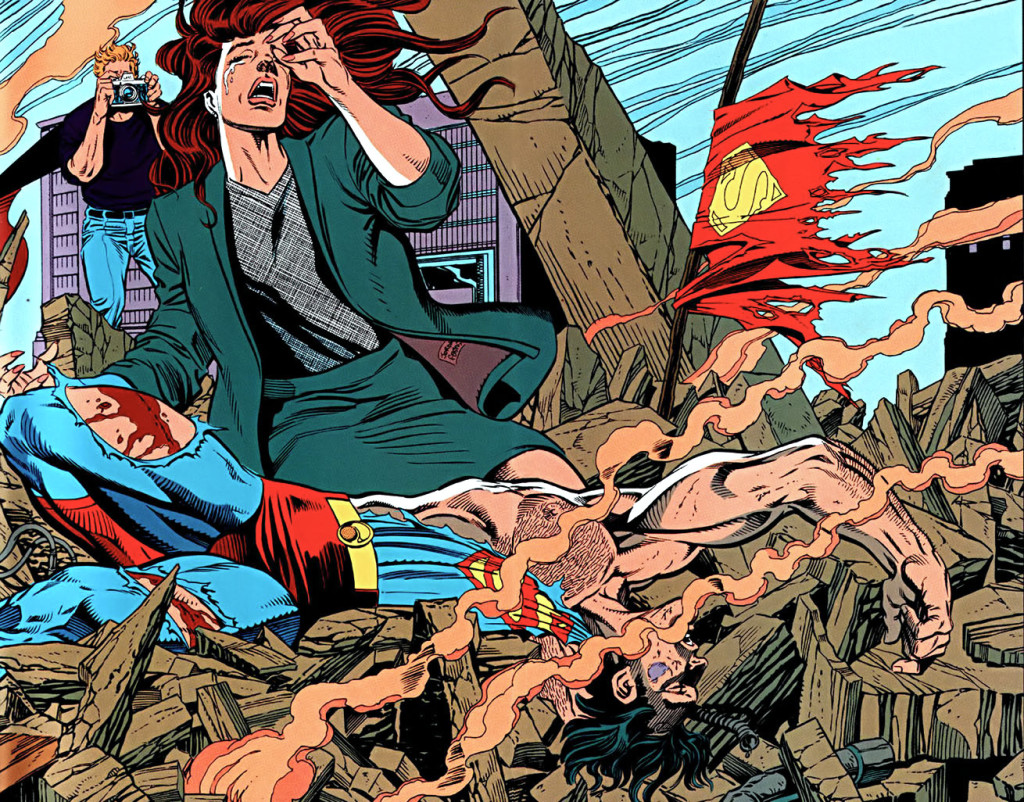 This article is a follow-up to our piece published Dec. 12, 2013, entitled “Merry Effin’ Christmas, Superman Is Dead”

Superman Is Still Dead but Nowhere Near Forgotten.

How two years’ time didn’t do a damn thing for me.

Two years ago on December 10th, 2013, at around 4:30pm, my life changed forever. I was preparing my scene for my acting school’s showcase. My husband, Luke, comes into my room looking very ashened. I knew something was wrong but I was not prepared for what he was about to say. We had, for some reason, talked about Luke possibly getting fired and as his wife, I was bracing for it (wives tend to brace for the worse and plain ahead just in case; well, at least this wife does). So I asked Luke, “Oh did you lose your job?.” He replied, “No, it’s worse, your dad is dead.”

My entire world fell apart with that one sentence. I could not believe my dad, who I thought of as Superman, was dead. It felt like I got ran over by a parade of trucks followed by some elephants. My dad was healthy.  At the age of 66 he could still carry full combat gear equipment and run 10 miles in his cowboy boots. RED WING BRAND COWBOY BOOTS. The toughest damn brand of boot in the world (my dad loved them because if a rattlesnake ever went to bite you it would get stuck in the leather and would not get to the skin). He was still training military personal in specialized techniques so that future American soldiers would come home safe and not die like all of his friends in Vietnam. My dad was still doing special missions with a 99% success rate. A rate, I might add, that is unheard of in his line of work. In short, my 66 year-old dad was kicking ass and just like that with no warning, he was gone.

Those 1st few moments where pure confusion. I was crying and screaming and just didn’t believe it. How the fuck could this have happened? I couldn’t understand it. Then it was like something started clicking in my head. It was like my brain was going, “ Oh shit! The chief is dead, no time to wait on all of his life lessons to kick in on its own time, she has to get booted into high gear now! GO GO GO!!”.  At that moment I became really focused and something else took over me completely.

I knew that there was no way in hell that I was going to be performing any time soon so I called my acting school (now former acting school) and told them what happened and that I would not be coming in. Then I called out from my agency, my manager, my work, all who where really supportive. I then had Luke call the hospital because I wanted answers. I still at that point had no idea how the hell my dad died. That phone call was one of the hardest phone calls ever made in my history. I got through the the nurse on duty who was there when my dad died and he got me through to my mom. I have never, ever heard my mom sound so sad and desperate. I talked to her and I remember (after telling her that I was on my way) she told me “ You are being  very brave.” I thought it was odd but brushed it off. Now, looking back, I guess I was just doing what my dad would have done in the same situation: be brave.

The ride to Joshua Tree was the longest two hours of my life. On the way to Joshua Tree, I kept hoping for a miracle. My dad has survived bombs going off on him in a movie theater overseas, gunfights while he was in a M*A*S*H, actually shot so many times we stopped counting the purple hearts, death threats from the Taliban and once my dad was going to visit my mother and he actually rolled his Mustang. He still made it to my mother’s house and scared the crap out of her. I kept think to myself, okay, when I see dad, if the blood hasn’t settled in his body, there is still a chance. There must be a way out of this. I got to the hospital (they were kind enough to keep my dad’s body in the room where he died so I could come and see him) and I saw his body. There was no chance that he was going to get out of this one even though it looked like his body was fighting to come back against all odds. The doctors told me that dad didn’t even know he died. He just collapsed. Not even the doctors could see it coming. It was like God just said, you are done now and because you have done so many good things, you are getting the easiest way out possible. Shitty for us, perfect for him.

We waited until February to hold a service for him. My mom didn’t want to ruin the holidays for anyone else. On my birthday, though, December 14th,  we did hold a dinner at my dad’s favorite Mexican food place so people could stop by. Lots of people came. I was happy for that.

Two years have come and gone and its still all so fresh for me. I think honestly it hurts worse now for me then it did when he first died. Don’t get me wrong, it was completely horrible the day he died and seriously the worse day of my life (and I have had some major crap happen to me in life that I won’t go into here). Every single day of my life, I think of him. I think about all of the things he has told me over the years in a very vain attempt to not forget. The sad thing is, there is no doubt that there are things that I have already forgotten. That hurts me so much. I so desperately want to remember his voice. I don’t have too many voice recordings of him because of his secretive line of work. I find myself asking all the time, what would my dad do? I feel like I am failing miserably at life. He is not there is to tell me that I am doing okay, encourage me or when I totally deserved it, tell me how I am messing up. I miss his sense of humor, his smell, hell, I even miss his stupid joke chain emails he used to send me. I just miss him. I have had people tell me that it gets better over time. So far, I don’t see that happening.

There are things I wish could tell him. I recently have gotten into Doctor Who. I wish I could show this to him because I know he would have loved it. He loved all things space. I went to see the space shuttle in Los Angeles and cried because my dad wanted to go see that and now we cant do it together. The only thing I could do was buy a little space shuttle toy and put it right next to his urn that I have by my TV (I keep my dads urn by my TV; that way I can always see him). There are things that my dad will never be there for: the birth of my 1st child, my new cat Tobby, my triumphs, my failures; he is just no longer there. Though most of all, I can no longer talk to him. That hurts the worst.