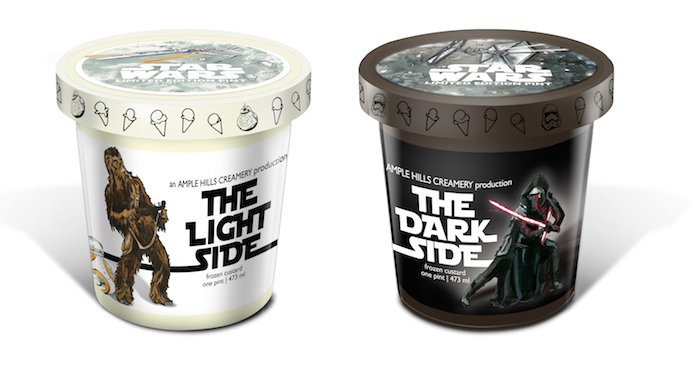 If the great Yogurt of Space Balls taught us anything, he taught us that “moichandizing” (!) is where the real money is made. In a sign that we are about to reach peak Star Wars, if we haven’t already, Ample Hills Creamery has announced a line collectible pints of ice cream based on Star Wars: The Force Awakens. The ice cream comes in two flavors: The Light Side, a marshmallow ice cream with crispy clusters and cocoa crispies (representing the dark side lurking within the light); and The Dark Side, a dark chocolate ice cream with espresso fudge brownies, cocoa crispies, and white chocolate pearls (to represent the light still hiding in the dark, waiting to burst through).

What’s the catch? This ice cream is only available online at AmpleHills.com for $36 per four-pack and can’t be purchased in stores. With respect to the folks at Ample Hills, paying that amount of money for pints of ice cream, that can only be bought online, just to have some cartons of character artwork is not appealing at all. In fact, the idea of paying for ice cream to be delivered through the mail sounds insane

Despite how shameless the promotion of Star Wars is getting, realistically, this is why Disney bought Star Wars from George Lucas for $4 billion, which was a bargain. Disney spent $4 billion for a property that is worth over $30 billion. A big reason the franchise is worth that much is not because of the films, which will cost a fortune to make, but because of merchandising and licensing deals such as this. Star Wars is one of the biggest and most lucrative IPs in the world – or dare I say, the universe.

The reason I have no problem with this is because the steady stream of the merchandising money is going to keep the lights on at Lucasfilm. That means we will continue to get more episodes of the awesome Star Wars Rebels, more canon comics from Marvel, more of the Black series of action figures from Hasbro and various other collectibles from Sideshow Toys and the like. Even if a movie under performs, the property is still viable. This is a franchise that will always endure peaks and valleys, but as a dedicated Star Wars fan, it’s hard not to embrace a time of peak Star Wars mania.