Stoneshard is due to release first quarter 2019. For now, roguelike fans can get a fix with the free alpha demo – Stoneshard: Prologue.

Stoneshard: Prologue is an alpha demo for Stoneshard. It’s also a highly promising, detailed roguelike that aims to break the mold with a feature-rich approach. Prefer to watch rather than read? Check out the preview on the 2 Headed Hero YouTube Channel!

In the cold, forsaken world of Aldor, vampires terrorize the countryside.

Incarcerated beneath a forgotten cathedral, only one man can hope to stem the tides of evil…

A gruff, grey-bearded barbarian that looks like a roided-up Santa Claus, and talks like a drunk uncle at the end of a wedding reception.

Roguelikes – or games that attempt to make that claim – are everywhere these days.

Cynics among gamers might start to roll their eyes when they scroll through the hundredth Steam page description listing “procedurally generated worlds and loot” as a feature – or let loose a low groan when they read another Kickstarter excitedly claiming “a different experience each time you play! Hardcore difficulty! Permadeath!”

These recently (re)popularized concepts have their roots in the old white-bearded ASCII dungeon crawler Rogue. The list of games inspired by Rogue are longer than a Midwest winter, and have been covered at length and with far better detail by people far more scholarly than we are. 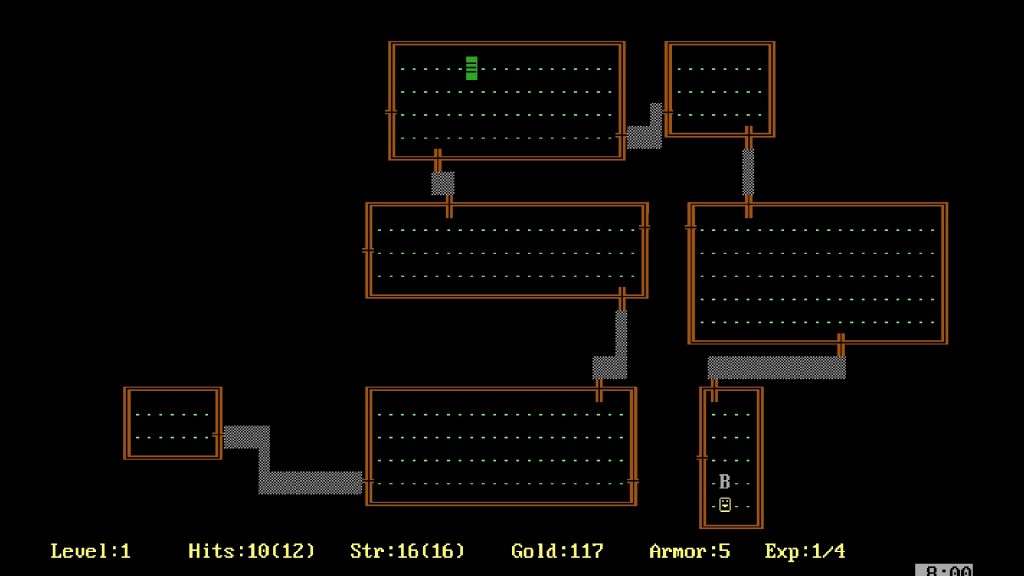 Rogue (1980) – The granddaddy of dungeon crawlers.

Even today, we still see excellent modern examples of these mechanics, whether they are streamlined into action games, platformers, and shooters. Other games opt to build these features into even more detailed role playing games that faithfully expand on the object of their inspiration. Stoneshard strives for the latter.

Ziggurat (2014) – Rogue-lite by way of arena shooters, like Quake or Hexen.

Stoneshard: Prologue is a free alpha demo from Ink Stains Games, a small team of six based in Saint-Petersburg, Russia. After the moderate success of their 2015 monochromatic stealth shooter, titled 12 is better than 6, Ink Stains set their sights on creating a turn-based tactical love letter to the roguelike genre that will feature an expansive overland map, a large cast of characters, and an extraordinarily detailed health system. 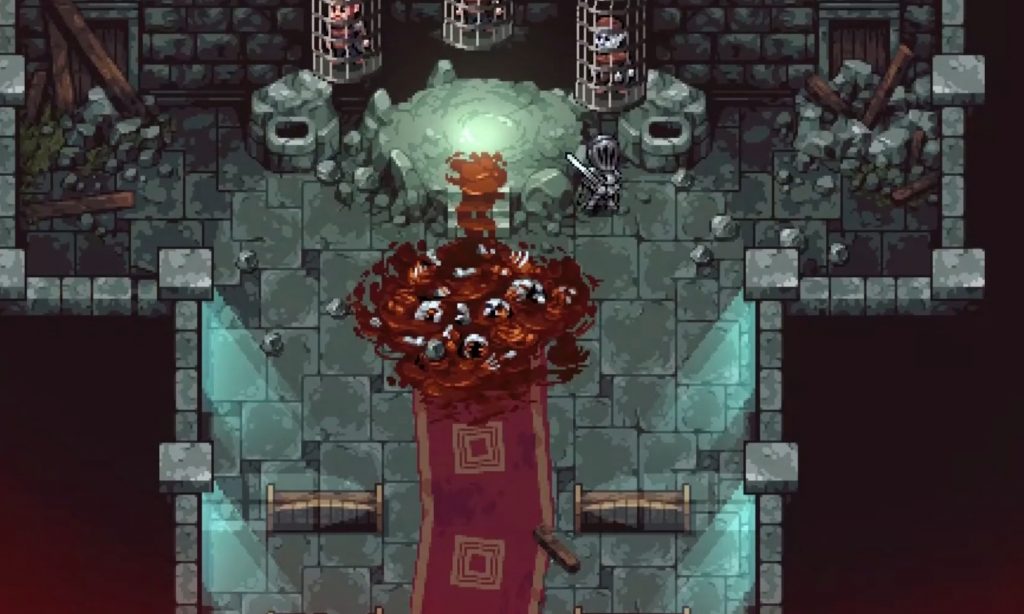 Detailed pixel art, Gothic cathedrals and dark dungeons are par for the course in Stoneshard: Prologue.

While the fully finished version of Stoneshard is scheduled for a first quarter 2019 release, the June 2018 release of Stoneshard: Prologue is a short but sweet slice, consisting of about an hour of combat and exploration that serves to introduce you to the world of Aldor.

Stoneshard: Prologue’s adorable big-headed characters wobble around and bump into each other like cardboard cutouts. Despite the sparse character animations, equipment is visible on both Verren and his foes, giving hints as to what kind of challenge lies ahead. Environments also have a great amount of detail. Barrels and crates explode into fragments that are pushed around the screen by your little cardboard standup, explosions shower particles through the dark dungeon halls, and the effects of spells and fire fit the game’s look rather well. 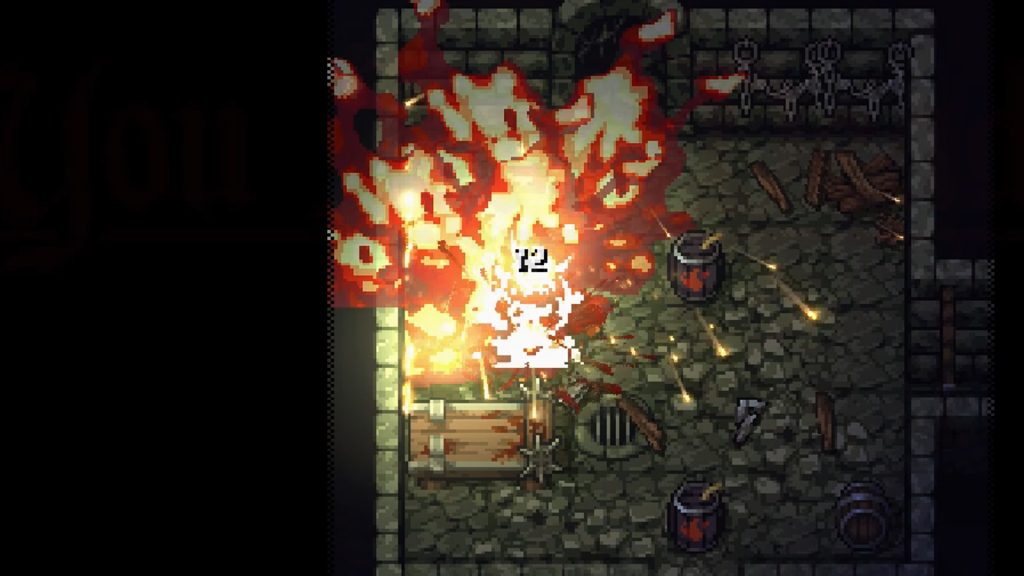 So how does it sound? Well, the effects are fairly immersive – clashing of steel on steel and sudden surprised squawks of vanquished vampires bursting into flames blend well with the score. The soundtrack is surprisingly gripping, and fits the dark atmosphere well – hints of Diablo or Dark Souls fit the game’s Gothic theme, and ambient noise tracks give way to sweeping epic orchestra hits during more intense battles. As for the voice acting: Let’s just say you’re going to either love Stoneshard: Prologue’s campy delivery for what it is, or hate it for what it isn’t. 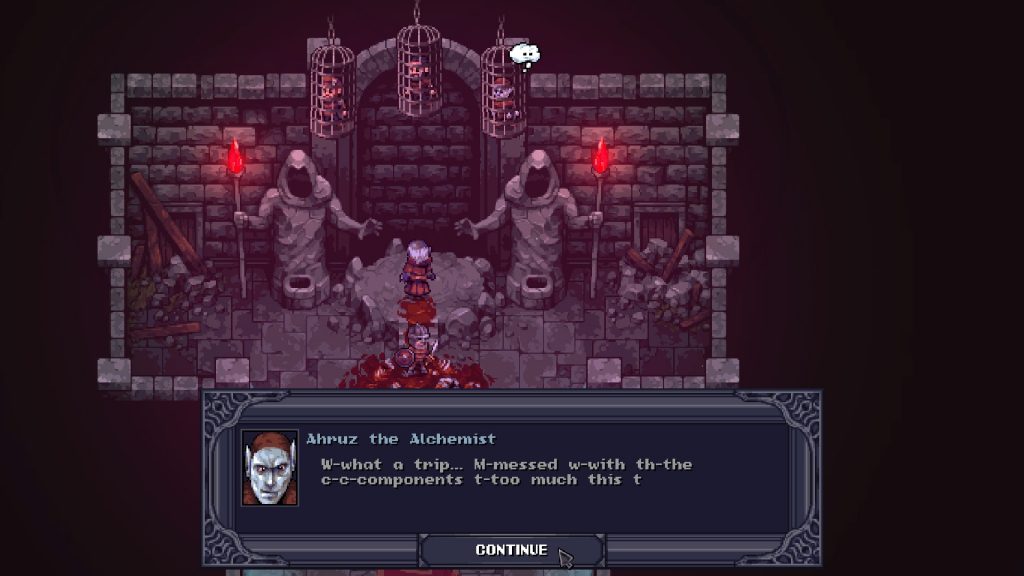 Another glorious line delivered by our alchemist buddy. For the full effect, check out the video on 2 Headed Hero.

Basic gameplay in Stoneshard: Prologue boils down to a fairly familiar turn-based point and click affair – click to move your little puppet around, click to attack puppet opponents, click skills to aim and use them on the other puppets. The game can be fairly difficult, and runs rely on a healthy dose of luck. Excluding the tutorial, the remaining level layouts, loot, and enemy lackeys are procedurally generated.

Praising RNGsus and pressing on will still reward most players with victory within about an hour.

While overall the game ran fine with no crashes, Stoneshard: Prologue is still effectively a playable alpha: therefore occasional hilarious and questionable bugs would pop up. For example – 17 gold kept following me around and springing out of the ground during one of my runs. Upon being picked up, it would disappear from my inventory – only to bounce up from the stone floors again a few turns later. 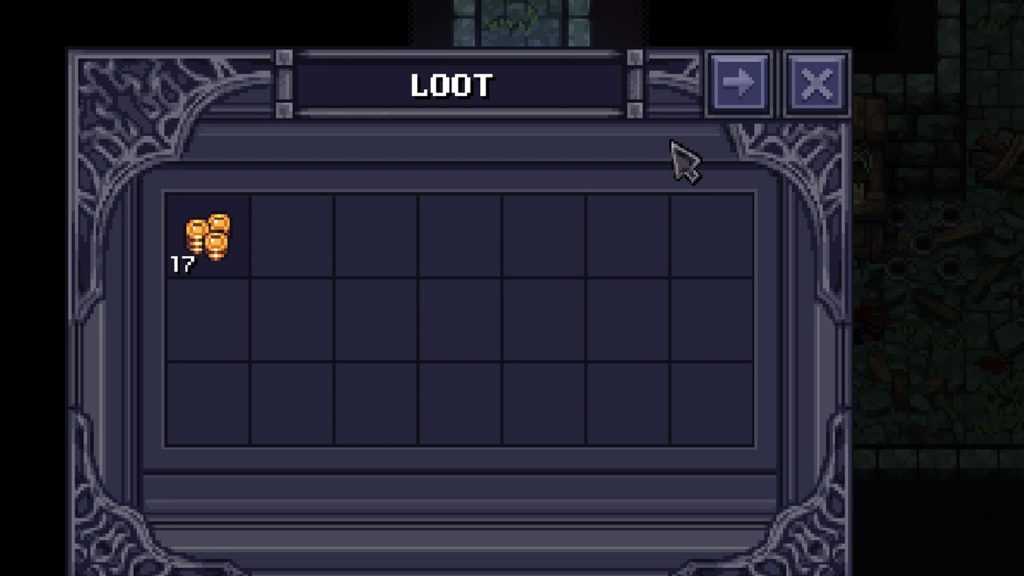 The offending gold pieces, in the flesh – so to speak.

Verren’s Body is Not A Temple: It’s an Amusement Park

Here we see Verren, blacking out after partying a little too hard.

Stoneshard: Prologue has a very detailed approach to health. There’s a huge variety of ways for Verren to die, and he can suffer a multitude of effects from even simple injuries. Break a bone? Well, better splint it so it heals. But wait – now you have to deal with the pain? I guess you better do cocaine about it. Oh, now you’re having a bad trip from the Colombian Marching Powder? Take a drag off this ether inhaler to restore your sanity. Hold on – the ether’s toxic? Well, better hope you can shoot up some antivenom or stop and drink enough water to recover. Oh, but stopping to rest and address these effects increases Verren’s hunger and thirst, so you better have some supplies handy. This delicate balance gives each injury a bigger sense of urgency. Therefore, using stealth and guerrilla tactics becomes a very important part of the gameplay.

Take care, or you’ll end up as crow food. Or vampire food. Or… CROW VAMPIRE FOOD.

Even though Stoneshard: Prologue is barely a gaming appetizer instead of an entree, it surprised me with its overall quality – even in its alpha state. I enjoyed its presentation and even found Verren’s heavily accented “grim-dark drunk uncle impression” to be fairly charming (in a B-movie sort of way). The developers have frequent progress updates and good communication on their social media and Discord server, and the team wears their influences on their sleeve – name-dropping some of my all-time favorite titles on their Kickstarter page.

I went in without many expectations, but this game really turned my head – Stoneshard: Prologue made me a believer that Ink Stains just might pull off their ambitious vision. It’s been awhile since I’ve seen a game that made me this excited to explore. Fans of traditional roguelikes that want more depth and detail will want to keep an eye on the full release of Stoneshard.

Check out the two-headed take on Stoneshard: Prologue at 2 Headed Hero!