Today we get a glimpse of Blasted Road Terror: a fascinating blend of real-time strategy and turn based management framed in the setting of a gas-powered post-apocalyptic wasteland.

Blasted Road Terror was released out of its early access run back in April of 2018. The one man development team – Pavel Hurka, aka Tryzna83 – has continually updated the game since its 1.0 release. These updates add a multitude of new mission types, vehicles, and weapons. Hurka’s hard work ensures wasteland commanders will still have much to look forward to in the coming post-release months.

Blasted Road Terror takes place long after an undisclosed apocalypse. The setting shamelessly borrows from the 2015 film Mad Max: Fury Road, even down to the dialog from your adorably pixelated raiders. Instead of placing the player in the role of a single intrepid survivor, Blasted Road Terror puts you in command of a wasteland stronghold. Commanders are then tasked to complete raids and missions against the multitude of cutthroat factions across the land. 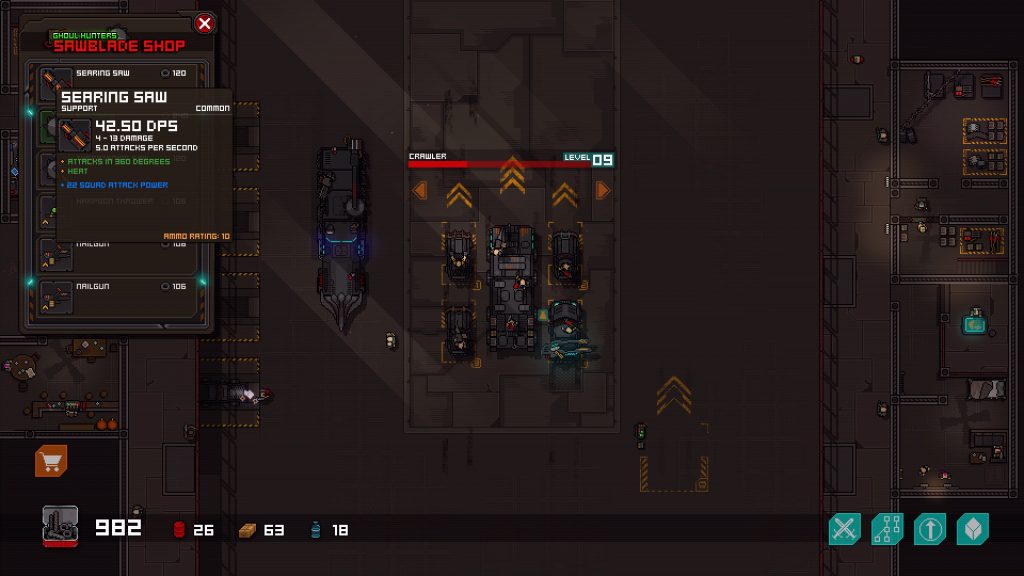 Improve your stronghold with the gains from your raids.

A Clean Look for the Post-Apocalypse

Graphics in Blasted Road Terror are a clean retro-pixel affair, summoning memories of Convoy or FTL. The cohesive and stylistic art reads well, and the multitude of vehicle designs are stylish and unique.  However, weapon sounds mostly lack a satisfying low-end impact, making them feel a bit anemic at times.

The soundtrack, created by Irish synth artist Bocuma, is amazing – and available on Bandcamp.  Driving synthesizers and epic movie crescendos fit the roaring engine effects and radio chatter from your units quite well.

The seat of command lies in behemoth land vehicles known as Crawlers. Since your Crawlers are initially defenseless, hiring vagabonds and vigilantes to escort your killer convoy is an absolute must for mission victories. At the stronghold, vehicles can be purchased and equipped with procedurally generated loot, with each car or weapon having a specific role. Heroes can be hired to round out your squad’s firepower on a temporary basis. The stronghold itself can be improved with the spoils of battle. As your Crawlers accumulate successes, they too can be upgraded to supplement your command style. 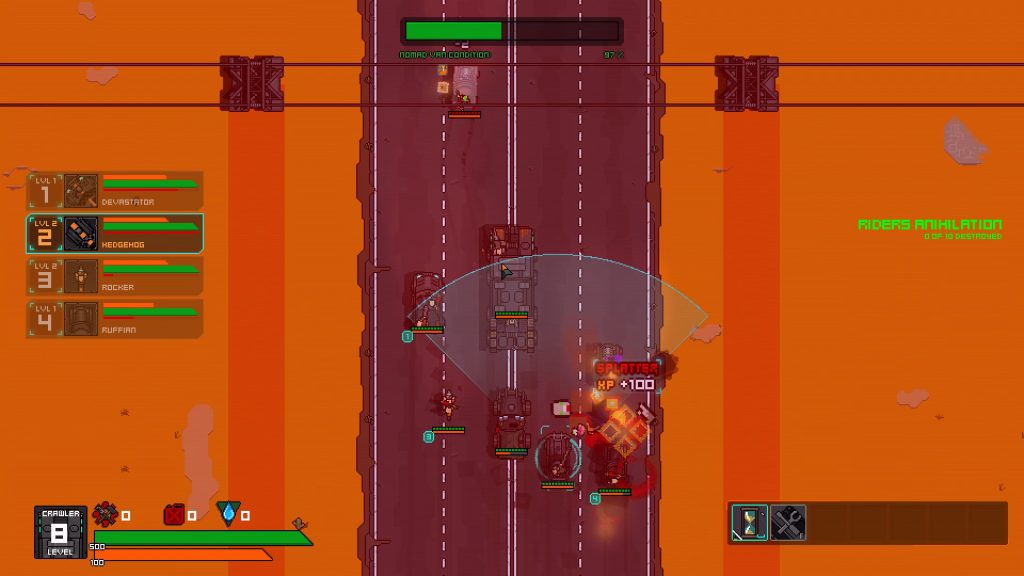 This big bad boy is your mobile command center on the dangerous open roads.

Blasted Road Terror’s combat is almost entirely about timing and positioning, but there’s still substantial depth to each encounter. Missions can range from short two-minute skirmishes to more involved ghoul purges, all the way to long marathon patrols that contain multiple branching stops. Rather than directly controlling their merry bands of misfits, players can only issue movement orders, slowly direct the Crawler itself left or right, and use the occasional special ability. Your mercenaries will automatically attack enemy interceptors in their firing arcs, and warn you of incoming road hazards, but overall their lives are largely in your hands.

The AI also isn’t perfect – your warriors do have some occasional pathfinding issues and a disturbing lack of self preservation. Enemy vehicles are likewise affected, sometimes refusing to move out of the way from upcoming obstacles before gloriously exploding on impact. Other than that, a couple inconsequential user interface problems pop their heads up on occasion. Rare movement glitches can also happen from time to time, sometimes teleporting vehicles in close proximity. 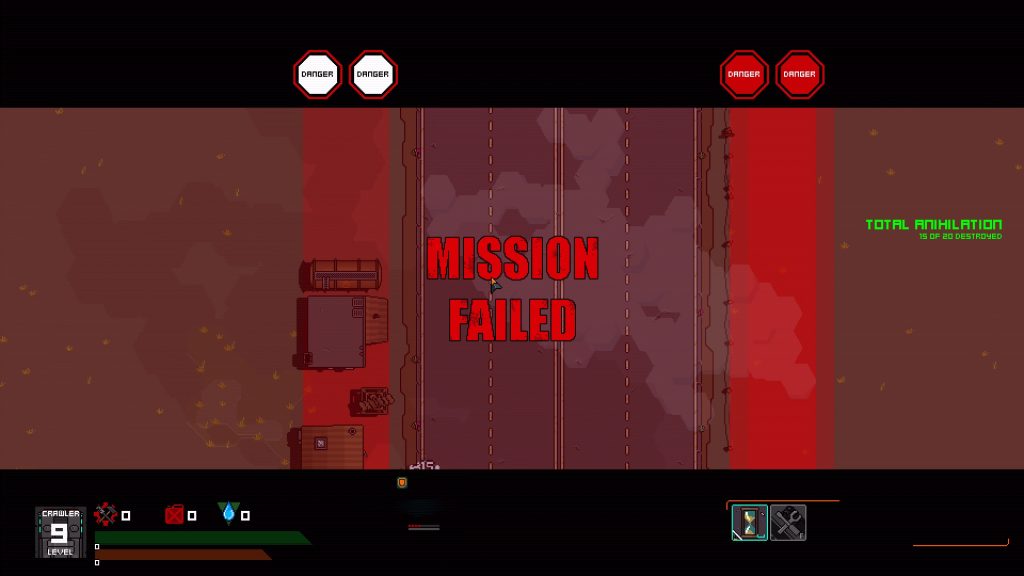 Mission failure can (and will) happen in an instant – but the game is more forgiving than it first seems.

While Blasted Road Terror claims roguelike elements, unforgiving difficulty and no hand holding on its Steam store page, there’s actually much more leeway here than other games that make those claims. The game leaves a lot of its finer points up to player discovery. Mission failure can and will happen in an instant, and usually precludes the loss of all your built-up escort cars. Even still, after crashing and burning, your main Crawler vehicle is simply recovered intact to the Stronghold for another day of mayhem. Daily rewards, random base events, and the liberal amount of heroes for hire make it easier to work your way back up without a large loss in progress.

Blasted Road Terror was a pleasant surprise. While the indie scene has no shortage of retro-graphics roguelike titles, the novelty of real-time strategy combat and variety in mission lengths make this an ideal pick-up and put-down casual title. Our Backlog Quest tends to find the games where the devil’s in the details, and Blasted Road Terror is no exception. The enjoyable little touches in the sound and pixel animation make a big difference here, and there’s enough difficulty and mission variety to keep wasteland commanders coming back for more.

My chief complaint actually has nothing to do with the game, or its presentation. Instead, I question its chosen platform for release. Blasted Road Terror is a joy on its own, but this game is simply begging for a mobile version- or even a release on the Nintendo Switch. Think of the possibilities: taking the Crawler out for a spin down the game’s dilapidated highways while in a cab, or purging ghoul roadblocks while waiting for takeout. It’s more than enough to earn a happy hell-yeah from my helmet. 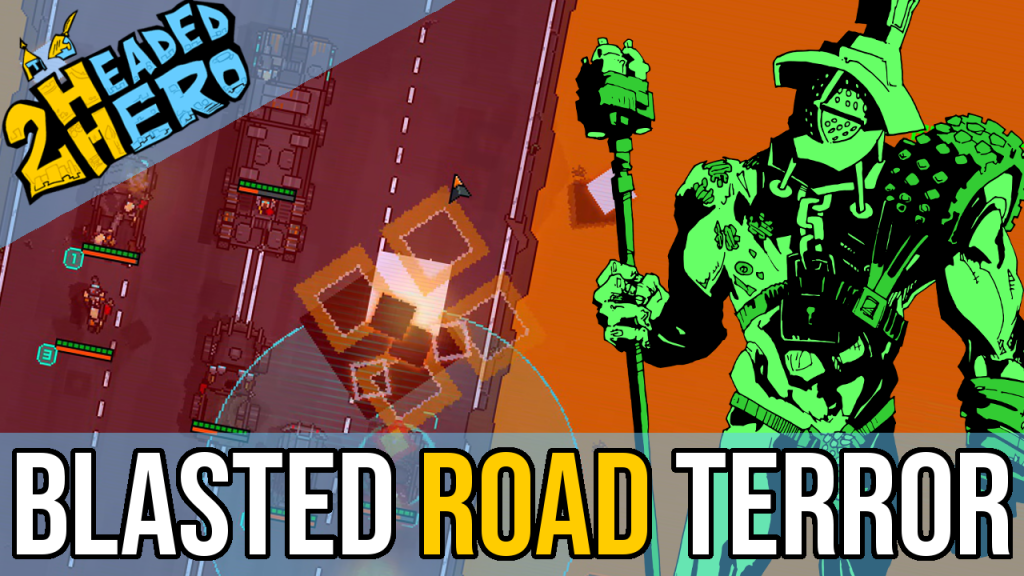 Prefer to watch rather than read? More in-depth analysis of Blasted Road Terror is in this episode of Backlog Quest – check out the 2 Headed Hero YouTube Channel!