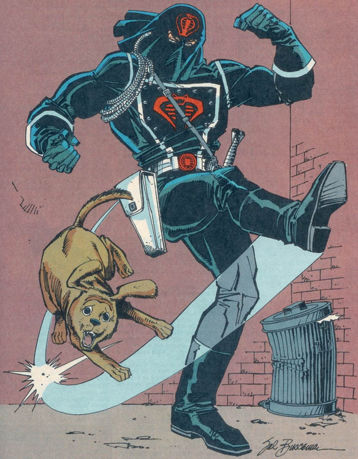 Not long after Marlon Wayans was announced as Ripcord, the G.I. Joe movie rumor mill churned out another possible casting announcement, Joseph Gordon-Levitt?he of acclaimed indie films such as Brick and less acclaimed sitcoms like Third Rock from the Sun?as G.I. Joe leader “Duke’s Best Friend.” IGN points out that an earlier draft of the Joe movie featured a Duke’s Best Friend, who becomes Cobra Commander (seen left kicking a puppy).

People, this is dumber than Cobra-La, the ancient race of snake-men introduced in the animated 1987 movie as being behind Cobra (check out Wikipedia for a true history of their stupidity, including how they made a deal with Unicron during the G.I. Joe/Transfomers comic crossover). I marvel at the ability of Hollywood to make movies dumber and more insulting than the not-exceptionally-brilliant ’80s cartoons of our youth. (Bumblebee peeing on John Turturro, anyone?)