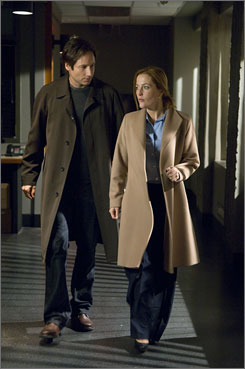 ? The Justice League has been defeated?not by Lex Luthor or a giant alien starfish?but by Hollywood. The movie has been put on indefinite hold, sez Variety, due to boring Australian tax reasons and hopes of getting a better script. Here’s an idea, WB?why not have Superman and Lex Luthor grow up as best friends before becoming enemies, like in the stupid G.I. Joe movie? (Oh, wait.) Anyways, Warner Bros. has been quick to tell all the stars they lined that they really like ’em, and want ’em for the movie, if the damn thing ever gets made.

? The second X-Files movie is happening, as a kind of second-place prize for nerds. USA Today has a brief article which points out the movie will have a stand-alone plot (as opposed to the tightly interconnected, nigh incomprehensible alien plot which initially drew in and eventually bored viewers by going nowhere) and a pic of Mulder n’ Scully walking together. Saucy!

? As a giant monster movie, Cloverfield hasn’t forgotten where it’s tofu is…um, processed, so to speak. One of the big-time publishers in Japan, Kadkawa, is running an exclusive four-part Cloverfield manga to promote the movie to its giant-monster-loving populace. It appears to be a prequel involving a Japanese protagonist instead of the over-privileged white hipsters who star in the movie; if you want more info, check out this article at Comic Book Resources. I’m still trying to recover from the pinned schoolgirl.