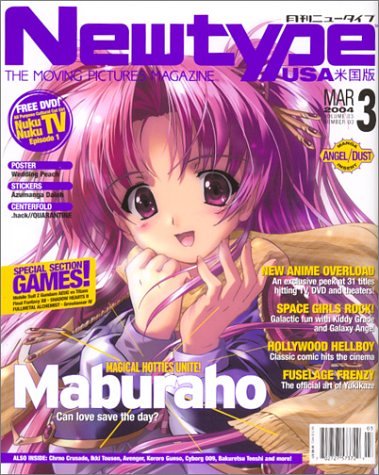 Anime licensor A.D. Vision seems to be having a rough week. First, they announced their linear Anime Network was dead. Next up for execution?ADV’s anime magazine, Newtype USA, the licensed version of the mega-popular Japanese anime mag, with its February issue being its last.

But NTUSA subscribers have received notes that they’re not getting entirely boned; ADV’s got a new mag that will begin in mid-March called PiQ. From the subscriber letter replicated on Anime News Network:

We will be launching a new magazine that will be on sale in mid-March. Titled PiQ, the magazine will cover anime, manga, video games and other aspects of pop culture of keen interests to you.

Also, ADV is giving two PiQ issues for every Newtype issue, since NT costs about $13 an issue. If I might hazard a guess from my years of experience in the anime industry, ADV probably mostly stopped NT because the Japanese licensors were charging an exorbitant price for the license, as if the American anime fandom could possibly buy the hundreds of thousands of issues the original Newtype sells in Japan. I imagine that ADV will also be happy to no longer have often seemingly insane Japanese overlords telling them how to do everything, but sorely miss the original Japanese content. Just a guess, tho’.