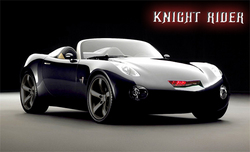 It usually takes trial-and-error to get things right (although Uwe Boll seems to be an exception). It?s hard to anticipate all the problems and needs of any project when you first start, whether you?re an architect, a painter or a nebulous corporation dedicated to fighting evil through technology and men with mild afros like FLAG, the crime-fighting arm of the Knight Foundation of Knight Rider fame. For instance, there?s no way that the beloved KITT 2000 occurred without some serious trial-and-error first?in fact, as our research shows, FLAG wasn?t even certain it was going to build a sentient car when they first started. Here are the 10 crime-fighting vehicles and items FLAG went through before KITT rolled out of the garage.

It?s a little-known fact that FLAG was created by the Knight Foundation in the ?60s, and the scientists wanted to be inconspicuous during the turbulent times. So why tear through the streets in a preppy Trans-Am when you can keep on truckin? in a cool VW Bus and spill bong water on the shag carpet? Instead of installing a voice chip in this bus, FLAG provided several different 8-track tapes with the voices of Jerry Garcia, Alan Ginsburg and Ravi Shankar. The front-mounted scan bar allowed the driver to detect who was ?holding,? and in the event no one was holding, a special internal system could be engaged to hotbox the interior. The VW Bug 2000 was retired when the driver failed to stop an underground espionage ring, instead choosing to figure out who sold him a bag of phony mushrooms.

What better way to maintain justice than by making a high-tech surveillance vehicle out of what is essentially a wicker basket with wheels? Well, there are tons of better ways, but that didn?t stop FLAG from trying out a prototype for one of these bad boys, equipping it with cameras, long-range microphones and a state-of-the-art meter for collecting fares. They quickly learned that while it?s nice to keep your agents in shape by having them drag a rickshaw around all day, it?s hard to chase after criminals when the tourists you?re pulling around interrupt the pursuit by demanding to be taken to Hard Rock Cafe.

Later, in the ?70s, FLAG souped-up a 1975 station wagon to help restore order to families, designed by a researcher who couldn?t get over his abandonment issues. This car could take the family on surprise ice cream trips but could also beat the crap out of anyone in the back seat in a moment?s notice. The molecularly bonded shell withstood any attempt to connect with it on an emotional level, but it could issue a well-timed compliment to the mother when it wanted its tires rotated. It drank itself to death after being replaced by a better machine.

Even super-rich philanthropists need to get up in the morning, so this industrial-strength coffee maker was built for the FLAG break room. Naturally, it also had the ability to fight crime. Once filled with water and coffee, it could brew a fresh cup of coffee with the same technology it used to locate enemy threats. The voice chip simulated a chipper morning news show anchor with an unlimited database of heartwarming human interest stories to convey. It was discontinued when the pot broke in the dishwasher.

FLAG also toyed with the idea of subsidizing its crime-fighting activities by harnessing the power of its awesome bad guy-car chases and billing them as stunts. So this motorcycle was designed to leap over enemy buses and through villainous flaming hoops, which FLAG set up at random intervals throughout most major cities. Its medical scanner allowed it to instantly diagnose any bones broken by repeated crashing, caused mostly by radar that was not good at judging velocity and ramp distances. The internal computer was programmed to womanize, repeatedly come out of retirement, and randomly convert to Christianity. It was decommissioned when it couldn?t jump Snake River.

In the late ?80s, FLAG has the prescience to believe the next generation’s Michael Knight was still a child, and should be trained immediately to maximize his skills. This starter-KITT was designed with rocket-powered wheels, a bell that shot fire, and an olfactory system for both smelling it and determining who ?dealt? it. The voice chip reminded kids that smoking wasn?t cool and that they should be home by curfew, and that may be why most of the kids FLAG tried to train on the vehicle chose to strip this bike and use the parts to blow up cats.

Looking to be environmentally responsible, FLAG took the body of a Buick Skylark and fitted it with earth-safe materials made mostly from Michael Knight?s companions Bonnie?s recycled jumpsuits. It contained an earth-conscious personality that during chases would prevent it from going faster than its gas mileage allowed, and it could instantly recycle any bullets it absorbed into fashionable accessories for underprivileged people. It was hindered by an ability to shut down any function it deemed environmentally irresponsible, like the microwave jammer and the oil jets. One day it just drove itself off to a commune and was never heard from again.

An admittedly bizarre prototype even by FLAG?s lenient standards, this high-tech toilet was programmed with a soothing personality that could not only help you ease out your daily functions, but also analyzed your byproducts and issued soothing warnings like, ?It looks like you?re not eating right.? Sensors inside the bowl were equipped to let you know when you?ve wiped enough, and magnesium charges could be deployed as a courtesy to anyone using it after you. For those unexpected enemy attacks, controls on the side of the bowl would fire whatever you?d deposited at enemies.

When Michael Knight realized Bonnie wasn?t giving up the goods anytime soon, he requested this 2000-level device. FLAG devised a cigarette lighter programmed to issue smooth pick-up lines whenever you lit a woman?s cigarette. A vocal synthesizer inside the lighter generated lines like, ?Wanna see my semi?? in voice that sounded like Jack Nicholson before he was all thick and doughy. It was programmed to release cryogenic gasses whenever it detected someone was cockblocking a FLAG agent.

After a few times of KITT being unable to pursue criminals due to large barriers, FLAG decided the best course would likely to just go over them, and thus designed the car-crushing truck. Built to crush all competition at monster trucks shows in an effort to earn extra revenue and secure sponsorship from Budweiser, this truck?s features included a cannon for spitting cannonball-sized wads of tobacco and special high-frequency transmitters that could undo the bras of women in the audience. It sat on 10-foot high wheels, with a roll bar and a voice chip programmed to kick ass and talk serious trash, as recorded by Chuck Norris himself?except when it was singing the National Anthem. It was retired after being destroyed by Truckzilla in what was termed at the time ?a vehicular domestic dispute.?