O miracle of miracles, it appears we’ll have an Academy Awards ceremony this Sunday after all. If it hadn’t, we couldn’t have put down 10 G’s on Javier Bardem to win Best Supporting Actor for Anton Chigurh, the Pete Rose-coiffed hitman of the Coen brothers’ No Country for Old Men. Bardem is beyond fantastic as the bizarre, morally insane killer, and his Oscar win is a lock (or so our bookie told us). In fact, it’s no surprise that Miramax has already had the returning writers’ whip up a few tentative new sequels starring the popular Chigurh, which T.R. had the unique privilege reading after we pilfered them from Miramax president Daniel Battsek’s desk. Enjoy!

NO COUNTRY FOR OLD MEN 2: ANTON RETURNS A MOVIE 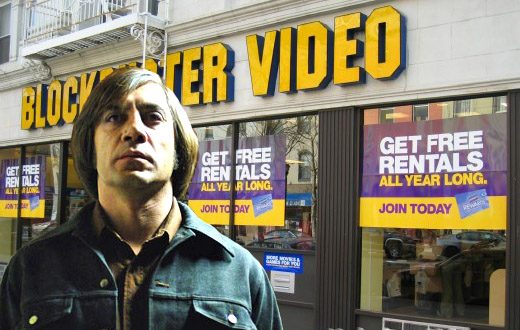 CHIGURH: What business is it of yours, friendo?

CLERK: I didn?t mean nothing by it. I just enjoy Doug E. Doug.

CHIGURH: You didn?t mean nothing by it. You just enjoy Doug E. Doug.

CLERK: … Will there be something else?

CHIGURH: I don?t know. Will there?

CLERK: The computer shows you have a late balance of $32.15.

CHIGURH: You have no idea what you?re talking about, do you? What?s the most you ever lost on a late balance.

CLERK: …on a late balance? That doesn?t make sense.

CHIGURH: I?m afraid it does. You know how this is going to end, don?t you?

CHIGURH: I?m not concerned with the late balance. It will be brought to me and placed at my feet. The late balance got here the same way I did. Somewhere you made a choice to penalize my account. All followed to this. Do you see?

CLERK: It?s two for Tuesday, if you want to pick another movie out it?s only $1 more for seven nights.

CHIGURH: You?re asking that I make myself vulnerable and that I can never do.

[Car suddenly comes through the wall and hits Chigurh]

NO COUNTRY FOR OLD MEN 3: ANTON GOES TO ARBYS

CASHIER: Welcome to Arby?s, can I take your order?

CHIGURH: I don?t know. Can you?

CASHIER: Well?I can rightly try. [scratches nose] We?re featurin? Potato Cakes on our Pick Five menu. They’s different from Potato Bites. Bites have cheese in ?em. Cakes don?t. A lot a? folks confusin? the two. Bites and cakes and such.

CHIGURH: What time do you close.

CHIGURH: 24 hours is not a time. What time do you close.

CHIGURGH: I could come back then. [eats handful of cashews]

CASHIER: That would be fine. We?ll be here.

CHIGURH: [takes cold tater tot off of floor] Call it.

CHIGURH: Anything can be an instrument. Small things. Potato things. Things you wouldn?t even notice. People don?t pay attention. And then one day, there?s an accounting and nothing is the same. Call it. [flips tot in the air]

CHIGURH: Well done. Take it. It?s your lucky tot. Don?t put it by the fryer. It?ll get mixed in with the others and become just a tot. Which it is.

CASHIER: I don?t mean to be rude, but you?re kind of holding up the entire line. 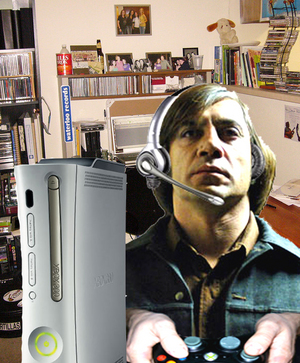 [CHIGURH_86 has joined the match]

BOMB DADDY: Hey Anton, I want you to flank around to the red team?s base and grab the flag. I?ll snipe from the ridge and?

CHIGURH_86: They always say the same thing: you don?t have to do this. It?s not any help though, is it?

BOMB DADDY: Every time. Every goddamn time with you. You?re on thin ice with the entire guild.

BOMB DADDY: No, Scott?I’m going to give him one more chance.

BOMB DADDY: Look, Anton, we’re blue this time. The other guys are red.

BOMB DADDY: Not cool, dude. Un-fucking cool. What are you, five years old? Fine, if that?s how it?s gonna be.

BOMB DADDY: Okat, everyone, back to Plan A. Leroy, head through the gulch. D-Dawg, camp out by?

CHIGURH_86: This is what I?ll offer. You bring me the flag and I?ll let it go. Otherwise, the blue team?s accountable, same as you. That?s the best deal you are going to get. I won?t tell you that you can save your game because you can?t.