Menu
Home
>
Cartoons
>
The Baroness Will Have Black Hair, and Other, Less Important Details from the G.I. Joe Movie 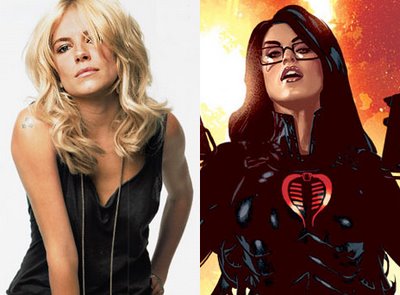 “[The film] requires a lot of physical training,” Sienna told Access. “I have a black wig, guns, and leather? it’s all very fantastic!”

So that’s one bullet dodged, according to Access Hollywood, who talked to some of the film’s stars, and gave out a other few movie details.

The film is reportedly an origins story. It could explain why Destro has a chromed head and why Snake Eyes doesn’t speak, among other outlandish details of “G.I. Joe” that the cartoon never explained.

“For people who know nothing about it, it’ll make sense,” [director Stephen]Sommers told USA Today. “And to people who love this stuff, it’ll show where they all came from.”

Pardon my nerdery, but don’t all the people who love this stuff already know where this shit came from, since it was all explained in the comics? Destro wore his ancestral mask, Snake Eyes’s vocal cords were destroyed in an explosion (in which he saved Scarlett). So yeah, Sommers, we know. How ’bout explaining how Duke’s childhood best friend just happens to grow up to become Cobra Commander? ARRRGH