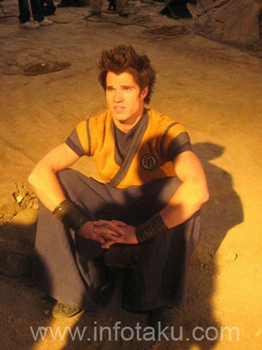 The live-action Dragonball movie had made me a liar. Sure, less than 24 hours I said that I would no longer be shocked at the film. And yet, here’s a picture of Justin Chatwin’s stunt double in Goku gear (meaning this is exactly how Goku looks, minus the facial features) and Emily Rossum as Bulma (with her stunt double as well). And I’m shocked at how fucking goofy it all is. Actually, I think Chatwin’s stunt double’s look of fear, confusion and nausea sums it all up pretty well. Oh, you can visit Infotaku to see a few more shots of the film, although I should warn you as one whose read all the DB/DBZ manga and see all the episodes, I recognized nothing. (Via Infotaku through Kotaku)