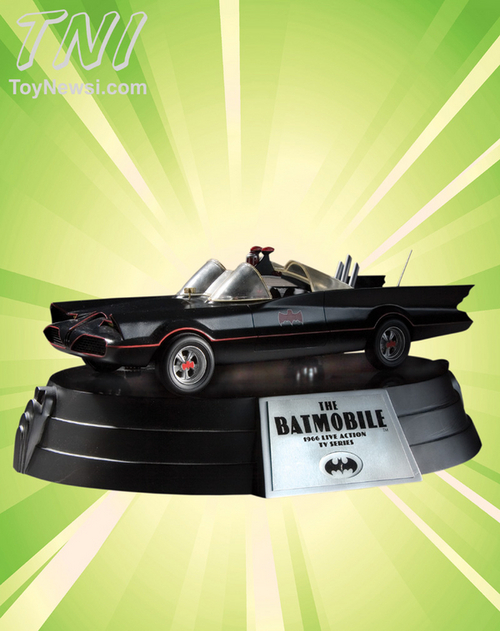 DC Direct just sent out it’s monthly toy and merchandise solicits, and it’s not exactly mind-blowing. The action-figures we’ve pretty much all seen before, except for a 12-inch Black Canary (toys with fishnet stockings make me uncomfortable, so I’m not showing it), and a 12-inch Spirit figure from Frank Miller’s upcoming movie (so it’s just a dude in an all-black suit). But I’m most excited by this replica of the 1966 Batmobile, which was always Batman’s sweetest ride; this thing is hand-sculpted and all the lights actually work, so it’s worth saving up $250 before this thing comes out in December.

The one really exciting action figure for you nerds is likely this dude:

He’s the deluxe figure in DC Direct’s World of Warcraft Series 3 line, and he’s a “Tauren Hunter” by the name of Brave Highmountain, which makes me giggle and throw up in my mouth at the same time.

Oh, last but not least, DC revealed two more of the Japanese, Koto-made DC statues, including a Dark Knight movie Batman and Supergirl in her popular “teen slut” outfit. Check ’em out here.