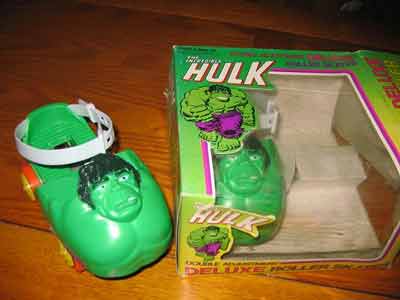 Toy makers can put a Batman bat-symbol on anything and sell it to children; with his costume, vehicles, gadgets and large cast of characters, Batman is a merchandising dream. So what the hell do you with the Incredible Hulk, a superhero that?s not only dumb as rocks but dresses like an exhibitionist hobo? You slap his face on crap that makes no sense, that?s what, and hope that equally dumb children doesn?t realizing your toy makes no sense and buy it anyways. The Hulk has had a long history of obscenely stupid tie-in products, and Topless Robot is happy (but a little angry) to show you the ten lamest toys attached to a guy whose been stupid enough to wear purple pants for the last 40 years. 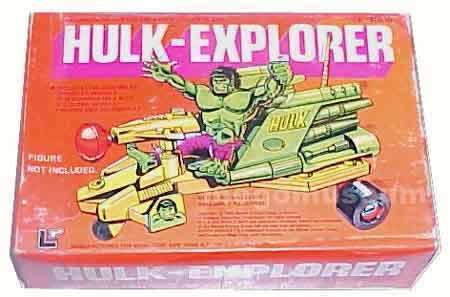 Never mind that the Hulk is mainly an enormous green ball of rage, and putting him behind the wheel is only slightly less deadly than asking everyone on the 405 to drive with a loaded shotgun on their laps. What the hell is the Hulk exploring in this thing? The large phallic thing on the front implies that it?s not for off-roading; in fact, it looks as goofy as one of those rides outside a K-Mart. Maybe you?re supposed to lure the Hulk in to it, he?s gets all happy and Bam! He?s back to being Bill Bixby. Cue the depressing piano music?

Remember how the Hulk used his Gamma Gun to stop super-villains? Of course you don?t, but the Hulk has never fired a gun ever (well, except the Mr. Fix-It days). Toymaker Remco got greedy and repackaged their best-selling Star Trek Phaser as a logic-defying Hulk weapon in 1979. Anybody knows if the Hulk learned how to use a gun, chances are we?d all be dead. 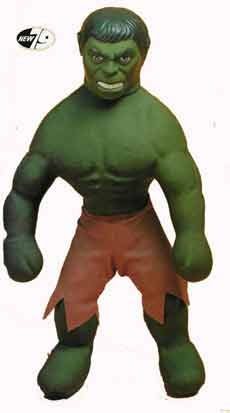 Usually Hulk figures are rippling piles of muscle, since the Hulk is a representation of Bruce Banner?s raging id. Unfortunately, this toy is of a Hulk who has just really let himself go, a sloppy pliable mess of green flab that just sits at home, drinks case after case of Natty Light, and talks about ?getting back in shape?soon.? If you add a Barbie to this equation, you can reenact out your favorite King of Queens episodes.

Let?s all get in a 10-ton flying machine piloted by a creature with massive anger issues whose mind operates on a child?s level! ?Nuff said. 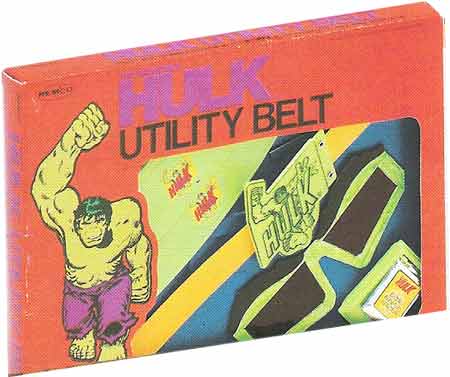 The Hulk Utility Belt is a fine example of toymakers copying the Batman principle to other characters in spite of all logic. A comic accurate version of the Hulk?s Utility Belt would a tattered piece of purple rope or possibly, an old toaster cord. A look at the accessories brings only further confusion as it contains a voice modulator, wrist gauntlets and a gamma detector, things the Hulk should be able to recognize, let alone use. Seeing as the Hulk probably pumps out a regular dose of gamma radiation every day, the constant beeping of the detector must serve to soothe the lonely Hulk. 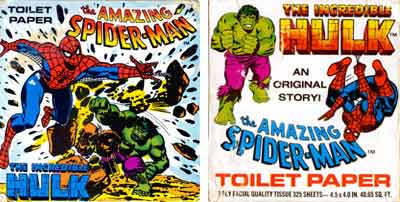 What better way to say ?I?m your biggest fan!? to the Hulk than to wipe your ass with him? Yes, your child can use his favorite hero to wipe doody out of his butt, like all children long to do with their heroes (I think Freud said it). This roll of toilet paper actually tells a story, so it?s a lot like All Star Batman, I guess.

Teaching children that its fun to throw punches at enraged, muscular men wearing nothing but tattered shorts is a life lesson they could deeply regret.

The Hulk doesn?t wear shoes nor does he roller boogie?that?s more of a Luke Cage thing?making this yet another totally bizarre item with no bearing to the big green machine. To top it off, the extremely questionable Hulk faces on the skates don?t look particularly angry but more as if he farted at a dinner party. 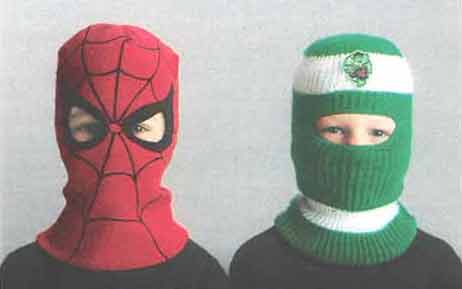 I can imagine the hoards of confused mothers when this item first arrived on the scene. ?Lou Ferrigno? What have you done with my Billy? Answer Me!? Clearly, the makers of this ?Hulk?-?branded? ski mask jus weren?t even trying, as green ski mask with an eye slit is the laziest bit of licensing ever created. Frankly, it couldn?t get any lamer even if they had just hand-written ?HULK? in magic marker on the mask. 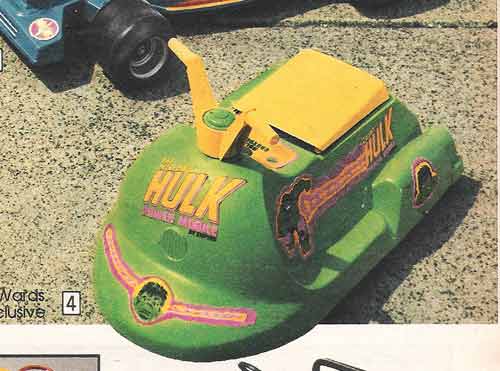 Judging by its design, a twisted marriage of ski-doo and a mechanical bull, one would guess that the connection this vehicle has is that it was created by the Hulk during a long brain-storming session. “RARRGH! Hulk can’t meet deadline! Hulk need new vehicle for execs or Hulk smashed, and wife yell at Hulk! RARRGH!”