Credit where credit’s due?the magnificent WWTDD has a huge exclusive in pics of most of the live-action G.I. Joe movie cast in their outfits. You should totally go over there to see the pics as is just and right, but since their site is running slower than hell, I’m giving you one. Anyways, hey! It’s Storm Shadow and the Baroness! 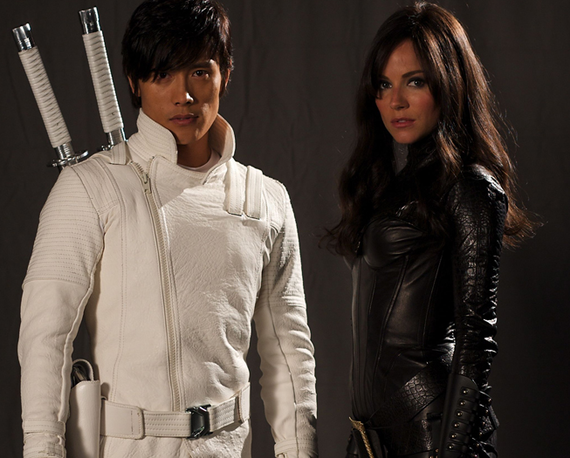 …yeah. I promise you that this maskless Storm Shadow and glasses-less Baroness are the best of the bunch (there’s a pic of Storm shadow in a white suit that makes him look like he’s running a southern plantation and a pic of the Baroness in big sunglasses that just makes me want to cry). If you make it onto WWTDD, you can see Duke in the same boring unnecessarily detailed body armor as Scarlett, Ripcord in the same boring unnecessarily detailed body armor as Duke, Cover Girl looking just absolutely nothing like Cover Girl (TR buddy Sean points out she looks like the first Becky from Roseanne in camo), a few more shots of Snake Eyes and Scarlett and an okay General Hawk.