Menu
Home
>
Anime
>
A Letter of Complaint from a Member of Speed Racer?s Pit Crew 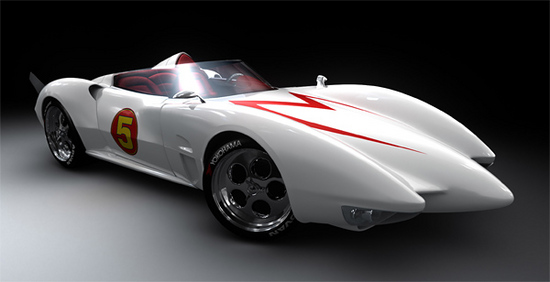 No job is perfect. But if you’re on the pit crew of the fabulous Speed Racer racing team, helping him, uh…race…in his…races…you’d think things might not be too terrible. Not so, as Topless Robot has obtained a copy of an employee complaint form from earlier this year. Looks like there are plenty of demons off the wheels as well as on them.

Please state the nature of your complaint(s), as well as any Team Racer employees who were involved:

Look, I?m sorry to do this. I pride myself on being a good worker, being professional, and all that. But there?s some stuff going on here at Racer racing that just shouldn?t happen to any pit crew, and frankly, I?ve had enough. Hell, I worked on Dale Earnhardt Senior?s crew for a few years, changing tires (like my daddy). Sure, Earnhardt?d hose me down with champagne whenever he won a race and occasionally sleep with my wife, but I stayed quiet, just liek any good member of the pit. But this?I cannot handle this stuff that is happening here, man. These are the problems:

1) The Mach 5. It?s a beautiful car, and I?m frankly honored to be working on it. But why isn?t there a safety on those buttons in the front seat, especially when there?s a 10-year-old and a damn monkey running around the garage all the time? Last Tuesday, I was walking in front of the car to get a tire, when the damn monkey leaps into the driver?s seat and starts slamming on the buttons. Of course, he hits the ?C? button, which releases those huge circular saws from the front of the car, the ones that are supposed to be used for cutting down trees while racing. I swear to god, those things extended, and they stopped less than an inch away from my knees. My knees! And that monkey just laughed and laughed. You know what medical benefits you guys are offering?I don?t have to tell you getting my legs chopped off at the knee by a monkey is not covered. This is frankly unacceptable.

2) The ninja attacks. Look, I know any professional racing team is going to be attacked by ninjas once in a while; when I was with Earnhardt, it had to happen at least once a month. But every freakin? night? That?s some [email protected]#%$, if you pardon my French. I don?t know what Mr. Pops or Mr. Speed did to piss these guys off, but it?s the pit crew that pays the price. We all have to take shifts in the night to guard the Mach 5, and we don?t get any comp time for this, I might add. Plus, all I?ve got to defend myself is a goddamn tire! My fellow mechanic Carl Carburetor gets a wrench, which can at least do some damage. What the hell am I supposed to do with a tire?! I might throw it over one ninja, disabling him, but then there’s always at leats five more running around with swords and throwing stars and @#$%. This comes back to the medical benefits, by the way.

3) On April 4th, Mom Racer came into the garage while I was alone, guarding against ninjas. I smelled wine on her breath. She hugged me, and?look, she assaulted me, and it?s made things very difficult with my wife.

4) That @#%ing monkey. Earnhardt knew he had to keep his exotic animals at home. So why does Team Racer let a @#%#%$ monkey have run of the full garage? And I?m not just talking about those damn buttons, I?m talking about the Mach 5?s trunk. That monkey?and that damn kid, Spritle or Spridle or Spraiddle, whatever the hell his name is? are always in the goddamn trunk. Now I wouldn?t care, except as the tire changer, since I usually have some time on my hands when the tires don’t need changing, it always falls to me to clean the damn thing out. That ape and that kid are @#%$ing disgusting. Every race Mr. Speed does, I open the trunk, those little hellions jump out and it?s a mess of candy wrappers and?well, shit. The trunk of the Mach 5 is full of shit, like, poop. It’s because of those two #@%&ers, and I?m @#$%ing tired of cleaning it out. I?d demand you buy the monkey a diaper, but I?m not positive it?s all the monkey?s @#$%, in all honesty. For the record, I think Spridle may be retarded.

Please state the remedy you seek for this complaint: