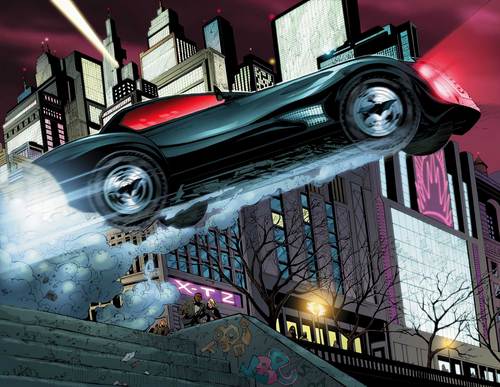 As Newsarama’s always wonderful blog points out, when Batman #676 arrives next Wednesday?the first issue of the “Batman R.I.P.” storyarc?he’s getting a new Batmobile, seen above. It looks reasonably slick, I think. But it’s suddenly dawned on me?why the hell does Batman have little Bat-symbols on his rims?

I can’t imagine the Bat-rims are part of his intimidating criminals and so forth, because frankly, they’re ridiculous. All custom rims are ridiculous. No decent criminal would think a man driving a car with custom rims should be feared; they’d think he’s a douchebag. If I saw a car whose rims all said “Steve” on them, I’d assume a guy named Steve drove the car, and that Steve was a huge dick.

So is Batman feeling his age? Is he trying to get down with the kids? Is this Robin’s fault? Was he minutes away from putting neon underneath the car, and decided on the rims instead? Or was he afraid someone might not recognize the all-black, no-door supercar being driving by a man dressed as a bat as Batman’s, and thus put his little bats on the rims so we’d all say, “Hey, nice ride! I wonder’s car that is–oh, never mind”?

Frankly, I don’t know the answer. But I do know, based on the above picture, Batman spent extra time making those Bat-symbols stay perfectly level, as opposed to rotating with the rims. Which is probably time he should have spent stopping crime, or something.