When geeks go to the movies, they want to see two things: male empowerment fantasies, and beautiful, submissive women. That?s why for every guy in a cape beating up bad guys, there?s a corresponding sexy actress who?s there to provide the hero with a reward, be it an upside-down kiss in the rain or a sweaty night in the mansion. These ladies aren?t necessarily the most beautiful women of the genre, but they are the most utterly and completely useless characters, there only to be rescued by the Bruce Waynes and Peter Parkers of the world. Let?s celebrate their sexy lack of assertiveness! 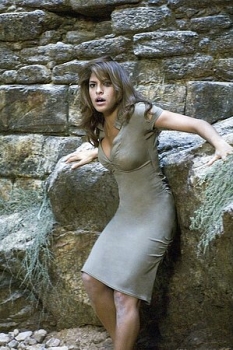 I seem to be alone in wondering how Miss Mendes keeps getting work. I?m sure she has talents of some kind, but she seems to only appear in genuinely terrible movies, and without any good lines to read, she pretty much has to rely on her smoldering good looks and generous curves. In the abhorrent Ghost Rider, Mendes pouts and lusts after Nicholas Cage throughout the film, despite having been abandoned by him as a teenager for incredibly stupid reasons. On the upside, she actually makes a halfway decent TV news reporter! ?Seriously, maybe she should become a TV news reporter. 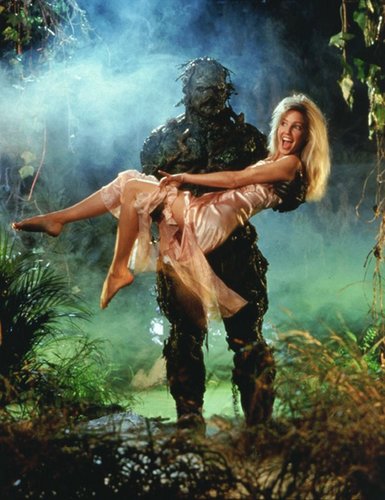 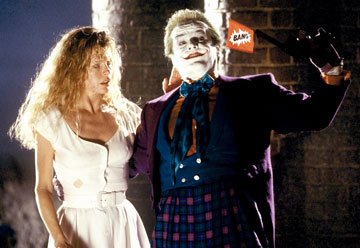 Basinger is the O.G. of this list: Original Girlfriend. She?s been perfecting the role of useless arm candy since 1983?s Never Say Never Again, and her role as photographer Vicki Vale manages to continue the theme. Through a series of squeals, yelps and gasps, Basinger helps the audience figure out what parts of the movie are supposed to be shocking, surprising or scary. (Considering that Vale?s previous assignment had been in a war-torn third world country, you?d think that very little would scare her anymore, and you would be wrong.) Basinger also gives us a great impression of photojournalists, as her character quickly tumbles into bed with her subject. Is there such a thing as ?photojournalistic integrity?? 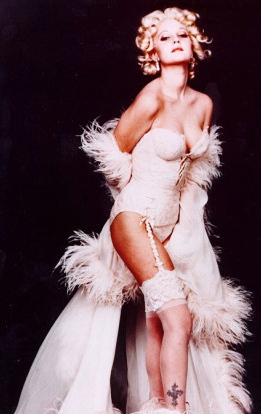 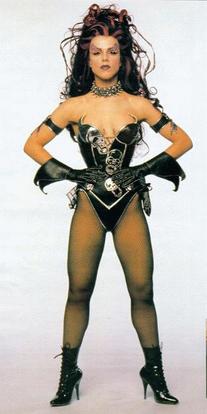 Is Kidman more believable as a psychiatrist analyzing Val Kilmer?s Bruce Wayne, or as a park ranger tracking down a nuke with George Clooney? Trick question; neither is believable. From the moment she walks on screen?hell, from the moment she appears on the poster?the audience understands that Kidman is only there for Batman to have sex with. Hey, somebody has to do it, so it might as well be a leggy Australian.

4) Cameron Diaz from The Mask

Before Cameron Diaz became Cameron Diaz?i.e. annoying or empowering, depending on your gender?she was a voluptuous bombshell who blew up our eye sockets in The Mask. Spilling out of her fringed mini-dress, Diaz was the showgirl Jim Carrey?s Stanley Ipkiss fell in love with, and the damsel in distress the Mask has to rescue from gangsters. Oh, and they also have a dance number together. If today?s Diaz is an overly tart Sour Patch Kid, in this movie she?s a big, juicy Gummi Bear.

[Ed’s note: I couldn’t find a pic of Vendela as Freeze’s wife; this will have to do. My apologies.] How do you make sure that your beautiful supermodel ?actress? doesn?t mess up her lines? Put her in a glass case and have her pretend she?s asleep. As Mr. Freeze?s cryogenically frozen wife, Vendela was the best kind of arm candy: an ice-pop. We didn?t have to see her act or listen to her talk, which helped us believe that she was so amazing that a brilliant scientist would turn to bank robbery in order to bring her back to life. Now if only we could believe that Arnold Schwarzenegger was a brilliant scientist.

2) Jennifer Connelly from The Rocketeer 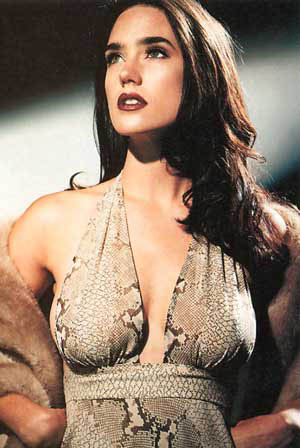 Despite being an Oscar-nominated actress, to a certain portion of the population Connelly will always be the girl who rode a mechanical horse in 1991?s Career Opportunities. Sadly, that visual image overwhelms every single line of her forgettable dialogue in that same year?s The Rocketeer, where she was the only woman in Hollywood beautiful enough to play a role originally played by a flattering drawing of Bettie Page. Still, Connelly could do worse than getting menaced by a white supremacist Timothy Dalton in a pretty darn good superhero movie?so she did, somehow getting tricked into appearing in the emotional car wreck that was Ang Lee?s Hulk. Now THAT was a career opportunity on a par with the end of Requiem for a Dream. Ass to ass!

The Invisible Woman of the comics is a fairly strong character, arguably one of the most powerful characters in the Marvel Universe. But in the beginning, Sue Storm was just a pretty, not-terribly-bright girl who could turn invisible, which made it easier for her husband to ignore her. That seems to be the role that Alba was cast for in Fantastic Four. Not only does Sue have to take off all her clothes to turn invisible (twice, mind you, always followed by her re-appearing in the buff ?accidentally?) but she also seems to be a scientist created only to date other scientists, acting as a sort of Sudetenland to be annexed and re-annexed in the territorial war between Mr. Fantastic and Dr. Doom. Basically, she?s an even less-clothed version of Nancy, the na?ve stripper Alba plays in Sin City, who?s constantly getting kidnapped by yellow bastards and rescued by Bruce Willis. (That?s right?Sue Storm takes off her clothes more often than a stripper. You?d think that would make FF the better movie, but you?d be very, very, wrong.)