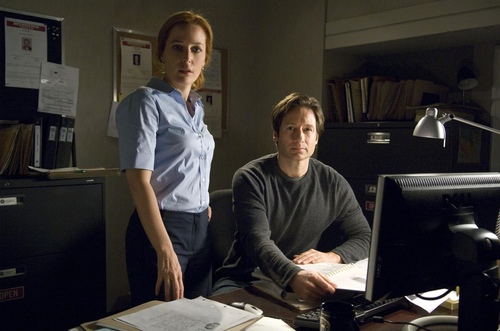 The official synopsis for the second X-Files movie, I Want to Believe, came out yesterday, and if you thought a second detail about the film’s plot would be revealed, well, then you grossly over-estimated creator/direct Chris Carter’s knowledge of how marketing works or why it’s generally considered useful.

In grand “X-Files” manner, the film’s storyline is being kept under wraps. This much can be revealed: It is a stand-alone story in the tradition of some of the show’s most acclaimed and beloved episodes, and takes the complicated relationship between Fox Mulder (David Duchovny) and Dana Scully (Anderson) in unexpected directions. Mulder continues his unshakable quest for the truth, and Scully, the passionate, ferociously intelligent physician, remains inextricably tied to Mulder’s pursuits.

Unexpected directions? Complcated relationships?! I am so there! If I’m not, like, watching reruns of Law & Order, which I bet I can find. If for some reason you’re not offended by this idiocy, here is yet another mind-shatteringly uninteresting new clip of Billy Connelly walking on ice as your reward.