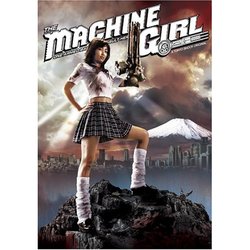 There’s a lot of TV science fiction this week. Not sure what that’s all about.

? The Andromeda Strain
Not the 1971 movie, but the very recent TV miniseries which ran on A&E. I had thought it was getting okay reviews until I saw the Amazon User Reviews for it. Buy at your own peril, sci-fi nerds.

? Dead Zone: The Final Season
If you had told me in 1989?when I first read Stephen King’s The Dead Zone?that a show based on the book starring Anthony Michael Hall would both exist and last for six seasons, I’d have laughed my huge, nerdy glasses off.

? Doctor Who: Beneath the Surface
Four DVDs of two Doctors fighting the Silurians and the Sea Devils.

? The Incredible Hulk Third & Fourth Seasons
These seasons are sold separately. I just couldn’t be bothered to list them separately. You have my totally insincere apologies.

? The Machine Girl
If you didn’t see the trailer for The Machine Girl, first go watch it, then immediately go buy it. A cute Japanese schoolgirl graphically murdering bad guys with guns, chainsaws and drill bras? it’s like they looked directly into my dreams!