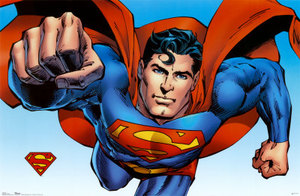 Lois cannot bring Superman to orgasm. She feels poorly about it.

But what could she do? Her human body was incapable of offering his Kryptonian body enough resistance to be effective. She would have to be more than human to? No. No, he would never agree to that.

Lois is dead, and Superman is sad. Supergirl consoles him at the Fortress of Soltitude…with sweet, sweet loving.

?Spin me, Kal! Spin me!? She called out in her clear, vibrant young voice. They began to spin.

Supergirl leaned away, arching her back, still clasping hands with Superman as they began to spin faster and faster. The building tension in Superman?s loins was becoming unbearable. He plunged into Supergirl with abandon, pounding his invincible cock into her invulnerable slit. They began to blur with the spin, creating a mighty vortex within the Fortress. The maelstrom winds whipped through the crystal pillars with a deafening roar, but it could not compete with Supergirl?s howls of delight. Her hair lashed about at supersonic speeds, causing a thousand tiny sonic booms to erupt.

Having orgasmed for the first time, Superman has decided?as is totally reasonable?to fuck his way through the DC Universe. First stop: the Teen Titans, where Raven’s hesitation has killed Beast Boy, and Superman has just killed Deathstroke with a knee to the head. Superman fucks Raven into feeling.

The dark aura shot from her hands and engulfed Superman. It felt as if Raven were everywhere, stroking his every nerve. Pressure enough to render iron assaulted his testicles, but for Superman it was magnificent. He thrust into Raven a final time.

And it gets better?so much better. Hit the jump for chapter 5-10.

Superman moves onto Starfire, who heats up when they have sex. A mountain is mostly destroyed. Robin is sad.

?I believe Kryptonian tradition would involve several five minute sessions of intimacy, each separated by two hours of deep contemplation and discussion of our feelings.? Superman said.

?Tamaranian copulation is hard, fast, and considered one of the most taxing in the known universe.? Starfire whispered.

?Golly, let me think about it.? Superman said huskily as his lips met hers in another kiss. They fell to the ground, Superman on top, causing snow to shoot up around them. Superman broke their kiss, running his lips down her throat and then ravaging her stunning ruddy breasts. Starfire bit her lip trying to suppress a moan as Superman?s tongue lapped at her nipples.

Superman flies off into space to fuck Maxima, the queen whose advances he had previously spurned. They have combat-sex, destroying Maxima’s flagship in the process.

?I doubt you could even find the right hole, peasant!? She taunted, gritting her teeth in pain. Superman reached under Maxima?s arms and gripped her shoulders as if he were using her to do horizontal pull-ups, which was precisely what he planned. Superman positioned himself and plunged into her.

Maxima?s cry of astonishment assured Superman that he had indeed found the right hole.

Having helped so many superheroines with his fucking, Superman is ready to die. Wonder Woman stops him, demanding her piece of the action. They fuck all the way around the planet.

A small village lay at the foot of the mountain. The villagers emerged from their huts to investigate the strange noises emanating from their ancient and accursed mountain. Cries of a strange tongue echoed from within the stone depths. The villagers cowered in fear. There was panicked murmuring that perhaps the gods were angry, but wiser villagers knew that these sounds were not born of anger.

The groans and moaning grew louder and suddenly the mountain burst apart, the debris thrown clear of the island and out into the sea. Where the mountain had been there was the clear vibrant cry of sexual release. The villagers gazed upon two gods, their bodies entangled in an ictus of bliss, their divine voices crying out together with the roar of a tsunami. The villagers fell to their knees and praised these mighty lovers whose throes of ecstasy had rid them of the mountain whose avalanches had claimed many lives.

After a stint in the ocean?where they’re peeped on by Aquaman?they reach climax, landing in Metropolis, in front of Jimmy Olsen. He takes pictures. Eventually, Supergirl, Raven and Starfire stop by for a super-orgy. Also, this chapter has my favorite line in the story:

Superman thanked her the only way he could: He hammered his cock into her without mercy.

Superman gathered himself, and concentrated. He had to do this just right, or he would let them all down. He leaned forward in a runner?s starting position, then suddenly he was gone. At apparently the same instant, every woman in the line moaned as she felt Superman?s cock fill her, over and over again, faster than they could fathom.

Superman moved at incredible speed, thrusting into each women in turn so rapidly that they hardly noticed him being absent. Wonder Woman, Maxima, Supergirl, Starfire, Raven, Stargirl, Katma Tui, Arisia, Donna Troy, Cassandra Sandsmark, Mary Marvel, and more than a dozen others all ground their hips to the same rhythm. At long last, each woman felt their climaxes blossom in a supernova of ecstasy.

?Oh, Superman!? They cried out in one voice.

Chapter 9: The Other Half

?Kara and I will not be able to be with you every night.? Wonder Woman explained as her hand caressed Supergirl?s smooth buttocks as it vigorously bounced atop Superman?s loins. ?We have duties of our own; lives to save and disasters to avert. Train to gain complete control over your own body. Train as an Amazon would.?

Disguised as Clark Kent, Superman finds Catwoman and begins to interview her. After asking if she’s into S&M and how she feels about Gotham City’s men fantasizing about her, they immediately have sex. After a lengthy session, Wonder Woman’s training pays off.

As Clark passed Selina?s bellybutton, he reached up to his glasses and depressed a small button on the thick frames. A beam of green light shot out from the bridge of his glasses, firing a diffused beam of kryptonite energy down into Selina?s womb. Clark had designed his new lead-rimmed glasses to neutralize his semen. While pregnancy was not a risk, the idea of his kryptonian sperm causing damage to a woman?s body was unacceptable. After a moment, he released the button just as Selina sat up.

Guys, I can’t tell you how much more awesome the full thing is. I highly recommend getting a beer, and reading this thing from beginning to end. You won’t regret it. Or if you do, most of you don’t know where I live.