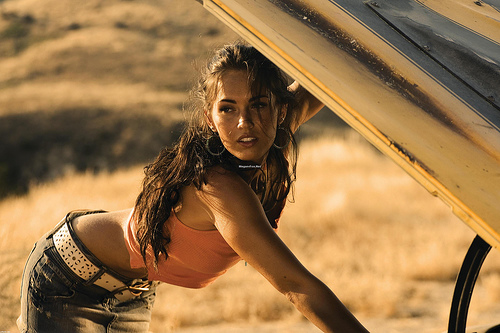 MTV has an interview with the somewhat attractive Megan Fox about Transformers 2: Rise of the Fallen, and besides admitting that she makes out with Shia the Beef during the course of the movie?one can only hope that the Autobots are all romantically peeing on John Turturro in the background?she also reveals this gem, which fully illustrates the oft-maligned Bay’s directorial prowess:

As for Michael Bay?s main directorial input to his lead actress, Megan had this to say: ?His main note to me is just to look hot; so I try my best.?

Yes, Michael Bay’s only direction to his female lead is to DO THE ONE THING SHE ALREADY KNOWS HOW TO DO. Reportedly, Bay also asked for his water to be wet, and has frequently requested the sky to be blue for the duration of filming. Sigh.