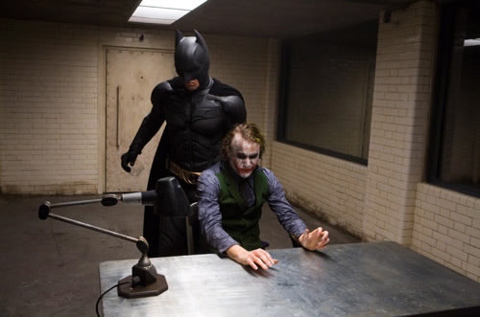 It is with deep regret that I must tell you that The Dark Knight is awesome. I was really hoping I could be that one lone internet nerd, railing against the film, bitching about small errors and nonsense, and just generally being an ass, but no?I thought it was outstanding. Not perfect, mind you, but shockingly close. Now, I think there are a few problems, and a few things that could have been improved, but seriously, it?s the kind of stuff that makes the difference between an A+ and an A?nothing that really takes away from the overall movie. Now, if God forbid you were waiting on me to see the film?and heaven help you if you were, go seek help?you shouldn’t read the review anyways, because it’s chock full o’ spoilers. Now, hit the jump, and I’ll make this pencil disappear.

I have so many bits and pieces I want to talk about, that I’m just going to do it in bulelt form. You have a problem with that, write your congressman.

? Unlike Batman Begins, which I fully agree with Sean Collins had a ludicrous doomsday device (also, it was insanely dumb that he would kill about 40 guys, all innocent men and technically his dojo mates or whatever, and set the damn house on fire to not kill the criminal), The Dark Knight is totally believable. There are no Bat-devices that seem too far-fetched (with one exception), the Joker uses nothing but bombs, guns and terror, and there is nothing that strained the credulity center in your brain (except that one exception). I think this was many, many times better than Batman Begins.

? I agree that Heath Ledger did a fantastic, mesmerizing job as the Joker. But I?m going to give more credit to the scriptwriters for his character that Ledger?s acting; it wasn’t Ledger who chose to give his character no backstory or apparent motivations other than ?fucking everybody?s shit up,? which made him far scarier. Plus, he was terrifyingly competent?he always had a plan, and he was always two steps ahead of everyone else. I mean, Gotham City had to call out the National Guard because of him, and it seemed like a reasonable response. Yikes.

? Incidentally, when he first said his dad gave him his scars, I was disappointed?I thought, ?Really? This is all because a bad dad?? Then when he later says he did it for his wife, I was delighted. He?s so much scarier with no clear origin.

? Since Joker is usually shown as the flip side to Batman?they both have traumatic pasts, went crazy, but one chose to impose order onto chaos, and one chose to promote chaos over order, I thought The Dark Knight?s take was very fresh. The Joker is hardly just Batman?s foe, he?s the foe of everyone in Gotham City. Does that have a comic precedent?

? I think one of the reasons that all the critics are going ape-shit over The Dark Knight is because it’s a superhero movie only nominally. If you took away the Joker’s facepaint and Batman’s costume, you’d honestly have an awesome crime drama, like Heat or The Departed. If there’s any one reason why The Dark Knight is the greatest comic book movie made, I think this is it.

? I really loved Aaron Eckhardt as Harvey Dent; I really did buy him as some impossibly noble crusader and a guy Batman would love, as someone who works inside the system. And for some reason, the idea of the Joker causing the accident that turned Dent into Two-Face seems spectacularly great to me. It makes Dent both more heroic and more tragic, and it makes the Joker even more evil. I had never really thought about Two-Face as a reflection of Batman before?again, that?s what they generally use the Joker for?but here, Dent is a guy who lost everything because of evil, just like Batman. As good as Dent was?or perhaps because he was so good?it?s even more unfair for him to suffer those consequences, and he?s goes ape-shit. I loved every part of that.

? Last but not least, the pencil trick and Batman?s take-out of the truck are two of the awesomest things I hope to see all year. It?s been a long time since I?ve been in a movie theaters where a full crowd gasped simultaneously, and damned if the Dark Knight didn?t do it twice.

And now, some nitpicky problems:
? That cellphone sonar thing was the stupidest thing in the film, but I did actually buy the first one Lucius Fox used with no problems (I assumed it was a special device that was disguised as a cellphone). But when Batman was able to turn all the cellphones in Gotham into sonar devices? And Lucius Fox was able to hear all the conversation in the city and pick out the Joker?s voice? Really stupid. But then Batman used it in the building and it gave him white eyes, which made him look like he does in the comic, which was totally awesome, so I forgive it.

? This might just be me, but I think both this and the last movie?s Batman costume looks way too much like the Schumacher-era suit, especially in the deep set eyes of the cowl. It?s totally fine in the dark, but in the light?like in the interrogation room?I kept thinking about Batman Forever. Am I alone in this?

? I know I?m not alone in thinking Bale?s Batman voice is ridiculously gruff, because I talked it over with a few of my faux film critic buddies. As Zac Bertschy said quite accurately, it?s fine when he?s delivering a line here and there, but in any extended conversation?like with Gordon?he just sounds ridiculous.

? I had assumed going in that Two-Face was going to be the third movie?s villain, but that?s, uh, obviously not going to be the case. I think The Dark Knight was too long?more because you expect the Joker to be the ending, and then you have that whole second Two-Face ending after it. I think The Dark Knight could have been even stronger if Two-Face had simply disappeared after his accident, and the movie ended with the Joker, and left all the cool Two-Face stuff for the next film. Not that what we ended up with was at all bad.

? Oh, and the introduction of both Harvey Dent?s coin and his Two-Face moniker was pretty ham-handed and forced. But since that was virtually the only forced thing about the entire movie, it?s not going to keep me up at night.

Again, none of those “problems” affected my overall enjoyment of the movie, and most of them weren’t problems as they were things that could have been done slightly better. I know it sounds ridiculous (and a bit pompous), but The Dark Knight genuinely made me think?and what’s more, it was still totally entertainingfrom start to finish. That’s some Akira Kurosawa-level stuff right there. I have no idea if, when or even how we will ever get another comic book movie as good, even if they make a third Batman flick. So go see this one. Now. Twice.

Oh, I totally want to discuss this more with you guys, so put your questions or comments in the, uh…comments section. I’ll either reply to ’em there or update the post with my responses.

Update! My replies to the topics in the comments.

? All Y’all ? You know, I also missed the Catwoman reference, so bully to all of you who did get it. I was trying to think what villain they could possibly use in the next film that would have any chance of replicating the storytelling impact of the Joker and Two-Face, and I’m thinking Catwoman is it. But since she’s more of an anti-hero, I’m guessing they’ll throw in another, more clearly evil one. But who?

? Patrick Cooper ? Yeah, Gary Oldman was stellar as Gordon, just like Oldman is always stellar. I’m shocked he’s doing the part?I mean, it’s a pretty small role, without the complexity of the bigger characters?but Oldman makes Gordon just as real, vital and interesting as any other character, despite his limited screen time. We nerds are incredibly lucky to have had this casting.

? Gia ? Maggie Gyllenhall was fine, but she didn’t have a lot to do. I have little doubt this is why Rachel Dawes will not be appearing in the next movie.

? All Y’all?I’ve got to believe Dent is dead. I just can’t imagine they wouldn’t make that clear if it was true in some way, just in terms of storytelling. Plus, they’ve kind of shot Two-Face’s wad thematically, as good turned evil by evil, and as the antithesis to Batman. Even if he showed up in the next flick, I don’t know what he could do other than just be a regular, run-of-the-mill, blow-up-Gotham kind of villain.