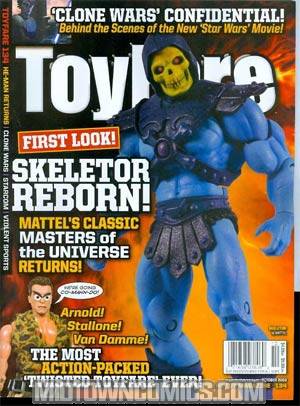 When Mattel debuted their Masters of the Universe Classics line at SDCC, there was one face missing?Skeletor. And that’s not just because he’s always been missing a face. Nope, he was slotted to star on the cover of ToyFare magazine (my former nerd alma mater), which happens to be on sale at comic shops this Wednesday (and on August 22nd at bookstores). Now, I’ve got the same problem with this Skeletor that I have with all the MOTU Classics, in that I’d rather have articulated, in-scale versions of the 2002 like than the 1982 line. But still, his skull looks nice, and the glowy red eyes are a nice touch.

The mag will have a big feature on the toyline, as well as some better big of some of the toys debuting at SDCC (including Mattel’s DC Universe), as well as the second part of the epic Twisted ToyFare Theater where the action heroes of the ’80s battle the evil action heroes of the ’90s. Incidentally, if I may take a moment for some TR self-pleasure here (*cough*), did you know that I help write Twisted ToyFare Theater? I mean, not write write, but I give suggestions for the scripts, which are generally ignored because folks like TR contributors Sean Collins and Chris Ward, as well as the ToyFare staff proper, are way funnier than I am. But I still get a byline on it, so shill I will! (Via He-Man.org)