Menu
Home
>
Daily Lists
>
The 12 Sexiest Action Figures Ever Made

Male toy collectors purchasing the latest example of impossible female physique carved out of plastic will tell you that they admire the character or enjoy the intricacies of the sculpt. They’re obviously full of shit. They’re buying those toys because they like plastic boobies. Let’s face it; many of today’s female action figures are about five-feet-short of being blow-up dolls.

Yes, it’s a great time to be alive and a nerd.

Seriously, have you seen most action figures nowadays? These plastic girls are hot, and they still usually cost less than a lap dance. Sure, there is very little considered more nerdily pathetic than buying a toy based on its sexiness, and thus, any list of the sexiest action figures would have to be considered one of the most pathetic, nerdy lists of all time. But it’s the list Topless Robot was made to run, baby. 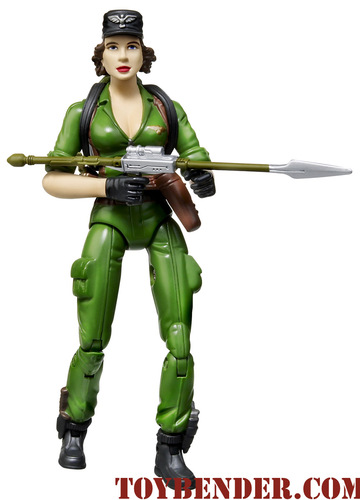 Lady Jaye could kick your ass and kick my ass, so if she wants to stroll around the battlefield with her cleavage hanging out and begging for dollar bills, it’s a-okay with me. Lady Jaye was one of the few ladies on the Joe team back in them early days; a few more have joined the ranks since. She was tough and a tomboy but still managed to be feminine and win over the heart of Flint. Where Hasbro’s other female action figures might have failed, she won her place in the toy boxes of ’80s boys. Her original figure was more pixie-ish, but her most recent figures have perfectly balanced her mix of ruggedness and sexiness. 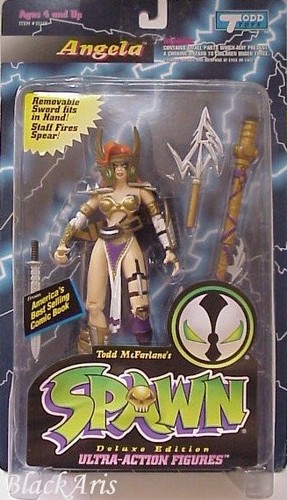 Let’s get straight to the point, here, fanboys. This figure of Angela, an angelic bounty hunter from the Spawn comics, is pretty mediocre, especially by today’s standards of toys. But back in 1995, Angela here sent male comic nerds into a frothing tizzy when it was revealed that she was going commando under that loincloth. By god, a female action figure with a fully visible “bad touch” area was sitting freely on the pegs at KB Toys, ready to be purchased by unsuspecting parents or young men who were already planning their Saturday nights around it! McFarlane Toys caved into public outrage, though, and painted panties on future releases of the toy. But “Party Angela,” as she was dubbed, had already become nerd legend. It was like she had descended from above in all her heavenly glory to give the world’s pathetic virgins a godly deflowering. 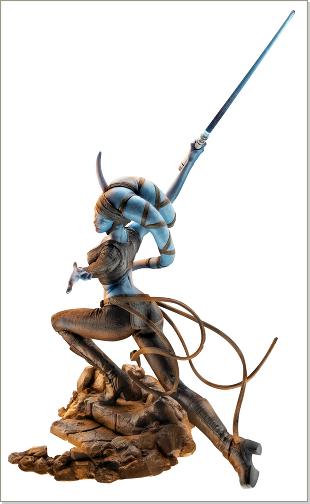 The original Star Wars movies were slim pickins when it came to hot chicks, let alone any women at all. George Lucas must have decided to make up for that in the prequels and was sure to include many multi-hued alien babes in the previous Jedi Order. The most obvious of these women who most male fans would like to fill with the Force is Aayla Secura, who doesn’t do much in the prequels besides look exotic with her blue tentacles and skimpy shirt, and get shot down like a dog by the Clone army. But her memory lives on in plastic form, most lovingly in this dynamic figure from Hasbro’s Unleashed line that is all blue head tentacles and full, dreamy hips. 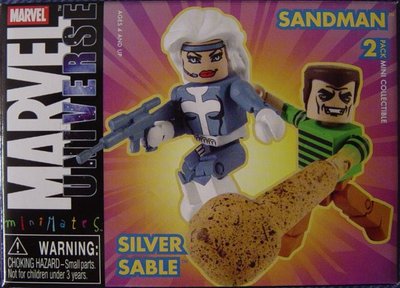 Dude, stay with me on this one, okay? Minimates are essentially more articulated Lego figures, yet there is something… evil… that Art Asylum does in their seemingly simple designs that can make a female block figure look sexy. Silver Sable, the comely mercenary who sometimes fight and sometimes allies with Spider-Man, is but one example of this phenomenon. The wavy hair, the crooked smile, the alluring eyes, the suggested curves and breasts on a body that is in reality as flat as a board… What more can I say? It’s a disturbing miracle. 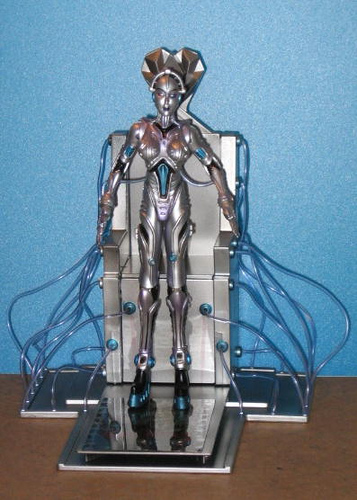 There’s a whole group of people out there who get turned on by machines shaped like people. And I’m not just talking about Transformers fans. There’s a real fetish for automatons that probably can trace itself to Fritz Lang’s 1927 theatrical masterpiece Metropolis. The real star of this early sci-fi epic was not the conflict between workers and company owners in a capitalistic society like critics would have you believe; no, the real star is a total robot babe that mad scientist Rotwang brings to life to create utter havoc throughout the city, starting with an exotic striptease. The fact that Rotwang created the robot as a replacement for his long-lost love that chose another man over him proves that all man really wants to do is create robot women that will have sex with him whenever he desires. The Futura action figure from Mezco’s Silent Screamers line takes a few liberties with the original design from the movie, such as adding larger breasts and huge, metal high heels. Liberties that we’re all fine with. 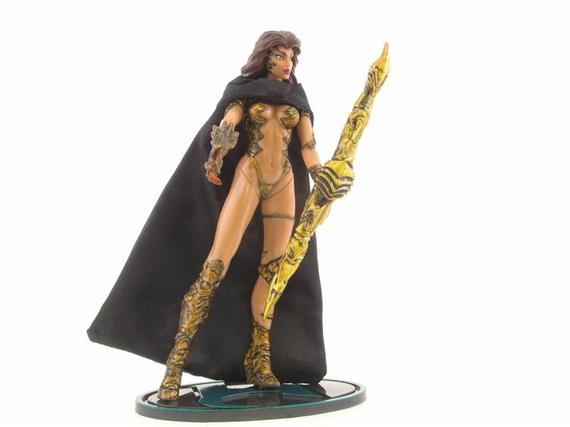 Let’s face it; Witchblade was made to titillate. The premise is that a magical techno-organic glove is passed to one woman each generation and then proceeds to shred off all her clothes and form itself into a teeny-weeny, tin foil bikini–and it enables her to fight crime with superpowers or something. Generally, based on the character design, all Witchblade figures have been smoking hot, just like the character is drawn, with the exception of that awful Legendary Heroes toy.

The best Witchblade figure is the Golden Witchblade by Moore Action Collectibles. It’s an action figure from a simpler time, but accurately captures the lovely Sara Pezzini as she was drawn in her comic book’s early years (aside from being gold instead of green). Her strong physique is smoothly rendered and her tanned skin nicely complements her golden armor. And there are fewer joints to mar her lovely curves. 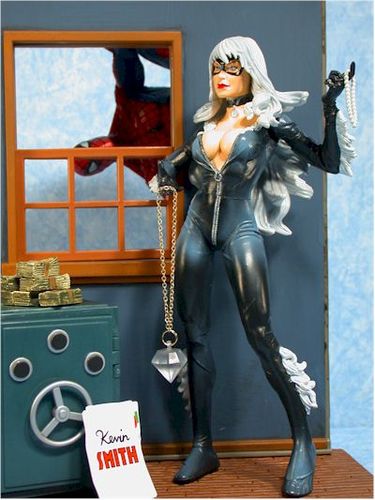 Black Cat is the kind of rooftop tryst every man hopes he’ll have once he finally gets bitten by some radioactive creature and can start swinging around the city in leotards. Nerdy Peter Parker suddenly became cool when he acquired the black costume, and he managed to hook up with cat burglar Black Cat (Felicia Hardy), a sultry, top-heavy bad girl who showed him a wild good time. The only problem was that she was only attracted to him when he was in costume. That offers some kinky visuals, doesn’t it? By the time she realized she loved the man under the mask, Peter had already moved on to and married the tiresome supermodel Mary Jane Watson. What a drag. Somebody should really do something about that pesky M.J.

Anyway, there’s a only been a few action figures of the Black Cat over the years, and most of them look uglier than a feline that’s been dunked in a swimming pool. But Marvel Select got it right, capturing Felicia at her femme fatale best and with ginormous breasts that are ready to explode from her catsuit’s zipper. Even Spider-Man, who’s heroically peeping through the window, can’t help but ogle. 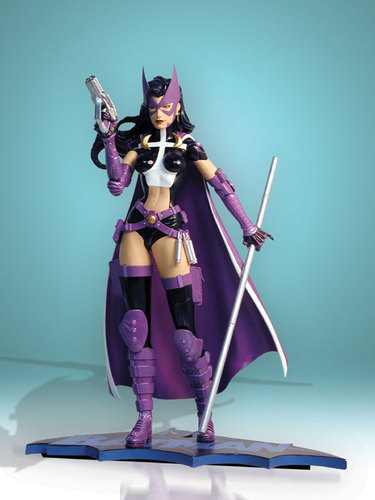 Helena Bertinelli is basically a female Batman whose parents came from the wrong side of the law (but were murdered all the same) and who actually manages to be more violent and crazy in her war against crime than the Dark Knight himself. Crazy is hot, though, and this DC Direct figure based on Jim Lee’s art from the Batman: Hush storyline (in which Huntress incidentally went more crazy than usual) is smoking in its depiction of her open-bellied costume. And we won’t even get into the whole Catholic thing Huntress has going on. Guys always want to be Batman; with the Huntress, it’s like being able to drool over him, too.

4) Sorceress from Masters of the Universe Staction Figures 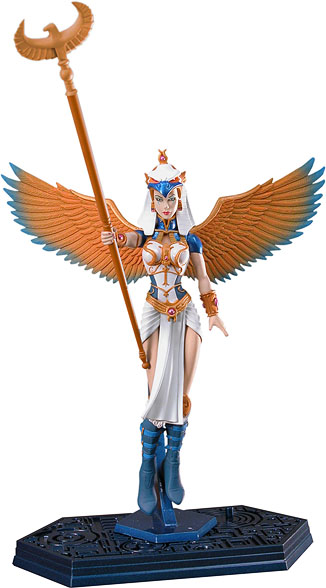 She’s not technically an action figure, but many female action figures favor sculpt over articulation to preserve the sexy curves, so what the hey? The Four Horseman didn’t get to make an action figure of the Sorceress before the 2002 He-Man line got canned, so they opted for the next best thing?a statue of her (and other characters that didn’t make it into the action figure line) done at the same scale.

The Sorceress action figure from the ’80s looked more like your marginally-still-sexy school lunch lady dressed up as Pocahontas for Halloween, but this new one perfectly captured what a hot magic babe should look like. It’s enough to turn any man into a He-Man. 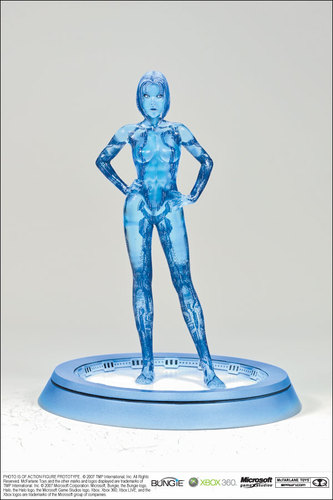 In the Halo video games, Cortana is a computer that appears in the form of a naked, blue female hologram that Master Chief can see and hear. Although an intelligent computer construct, her mind was based off a human brain and she sometimes displays the moodiness of an actual woman. While she is crucial in saving the day, she’s obviously there to add some sex appeal that’s missing from a bunch of dudes in heavy armor blowing up disgusting monsters.

The Cortana action figure is mind-blowing and amazingly detailed for a Star Wars-sized (but unarticulated) figure. All of her curves and bumps and bits are depicted beautifully in the blue glow of the light-up base she stands upon. And in the end she admits her love for Master Chief, just like all the guys playing had fantasized about at some point before expressing their love back in a tissue. 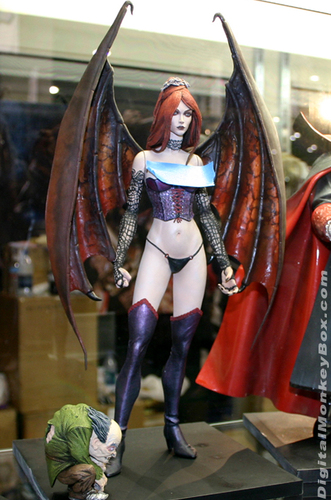 Of all the demons and devils that mankind has conjured out of the darkness, the Succubus has to be least intimidating. Oh, a demon in the shape of an incredibly sexy woman who will try to have sex with you? Oh no! The horror! Now, the Castlevania games take the Succubus a little more seriously, in that besides being sexy, she tries to kills you. As you can see, the Succubus from the Castlevania games, crafted into a jaw-dropping action figure by NECA, shows danger has never been more attractive. Unfortunately, in Castlevania: Symphony of the Night, she chose to appear as the hero Alucard’s mother. That’ll give him some therapy bills.

Even more unfortunately, NECA’s Succubus figure was actually sculpted topless–and sent to cons around the country, to be displayed with a small post-it note across her chest–until someone realized that no brick-&-mortar store would ever consent to selling such a harlot. So they quickly took the previously removable top part of her corset, and glued it on every damn figure before packaging. Don’t believe me? Pry it off, and see what awaits. (The answer is nipples.) 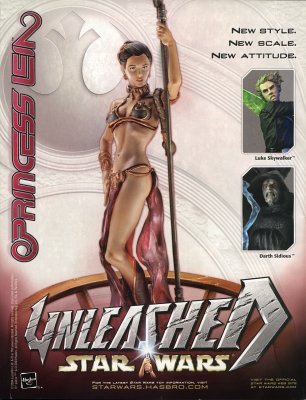 The problem is that Kenner/Hasbro has had some difficulty over the years sculpting Carrie Fisher’s face without it looking like Dr. Cornelius from Planet of the Apes. This problem might just be isolated to normal-scaled Star Wars figures, though, because Hasbro got things damn right when they recreated Slave Leia in the dynamic Unleashed line. Leaning on a staff weapon like it’s a stripper pole, every taut muscle and revealing aspect of her bikini is rendered amazingly in this figure of Leia that is guaranteed to make even her own brother swoon.