Invented by toymaker Harry Kislevitz in 1951, Colorforms are a childhood staple that give kids the opportunity to have endless adventures using only vinyl strips, laminated cardboard and their imaginations. The very first set was an assortment of colored shapes that tykes could adhere to a black background to create little masterpieces. Since they didn?t make any noise, required no maintenance and were somewhat educational, parents loved them. Children enjoyed being able to control the action and how they could play Colorforms alone or with others. In many ways it was the perfect toy for everyone involved.

Despite their initial success, they didn?t truly become a pop culture sensation until sets based on popular characters started being released. At the height of Coloformania during the 1970s and ?80s, every movie, TV show and cartoon with even the most remote kid appeal was enshrined in plastic pieces that ?peel and stick like magic!? In the nearly 60 years since they were first introduced, some Colorforms sets have become classics amongst toy connoisseurs. Even more are better left forgotten. Here?s a look at five from each category. 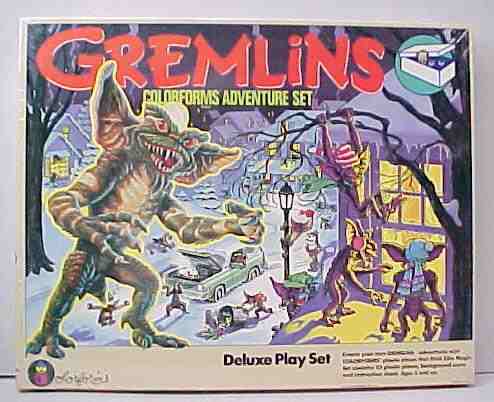 This set features nine, count ?em, nine Gremlins. You can dress them up in scarves and give them beer bottles to carry. You can make them throw snowballs at Gizmo and Billy. One of the mutated Mogwai looks like he is hanging from the Christmas lights on the Peltzer family?s porch. Another gives the impression that he is going to hump a snowman. These Gremlins are mischievous indeed! There?s a smaller set based the film as well, but if you have to pull a Sophie?s Choice between the pair you?d be more useless than one of Rand?s smokeless ashtrays if you didn?t choose this one.

4) Planet of the Apes 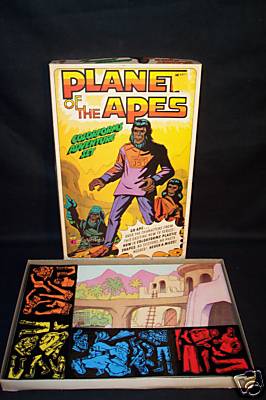 Did you know that Planet of the Apes is a G-rated film? Think about how crazy that is. From Heston?s bare ass to Honorious? ape-inflicted lobotomy, there?s a lot of imagery in the film to terrify kids. Fortunately, night terrors caused by the flick were slowly soothed away as children everywhere got to curse those damn dirty apes in their own special way by playing with this toy. Unbelievably, you can actually still get this cheaply on eBay. Wouldn?t Cornelius look great sticking on your fridge? 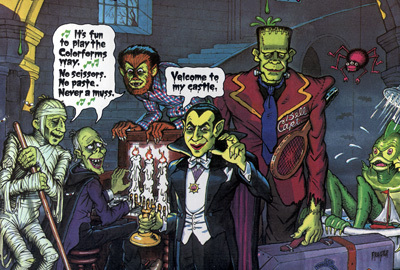 Appealing to Colorforms collectors and horror buffs alike, this highly sought after entry from the archives is three levels of frightening fun. The top floor offers up a mad scientist?s laboratory, complete with two opening doors. The middle floor is a library which is highlighted by a mummy?s sarcophagus. Lastly, the bottom level offers up Dracula?s basement lair, complete with coffin. Featuring all of the classic Universal monsters (even though this wasn?t officially sanctioned by the studio), the set also includes a ghoulish gorilla that you can use to rule the Planet of the Apes. Take that, Dr. Zaius. 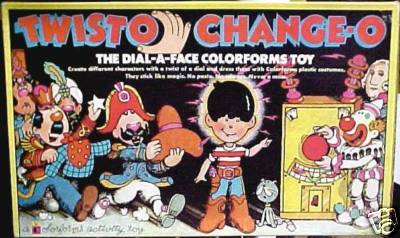 A variation on the typical Colorforms offering, this 1972 release featured a character whose face could be changed with the turn of a knob. What this meant for users was a wide selection of play possibilities. With options ranging from George Washington to a cowboy, kids could spend hours creating various character and costume designs using the included clothes pieces. If this interactive concept sounds familiar to you, that?s because a similar feature was used in the Tricky Mickey Magic Colorforms set of the early 1980s. 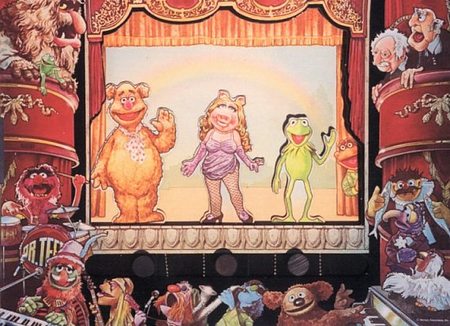 Highlighted by movable versions of Kermit, Fozzie and Miss Piggy, this deluxe set captures the essence of childhood wonder. Through a faithful recreation of the Muppet Theater and its inhabitants that was illustrated by movie poster legend Drew Struzan, this 1980 release let kids create their own Muppet revues. It?s probably not a false assumption to think that the majority of you beautiful Topless Robot readers were deeply impacted by the life and works of Jim Henson. The warm memories that this toy stirs up are a tribute not only to his legacy but also to the brilliance of Colorforms in general.

You’re not done?hit the jump for the 5 most ridiculous Colorforms sets ever made.

5) Little House on the Prairie 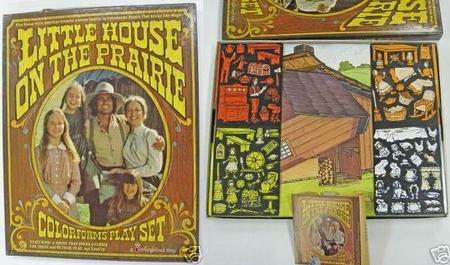 It seems like each episode of Little House on the Prairie featured someone being stricken with blindness, getting killed in a stagecoach accident or both. Given the fact that most of the pieces in this set are body parts of various Ingalls family members, some toy exec clearly felt that all of the show?s characters would have been mutilated in some way by the time this was released. Remember kids, life in the 1870s sucked. 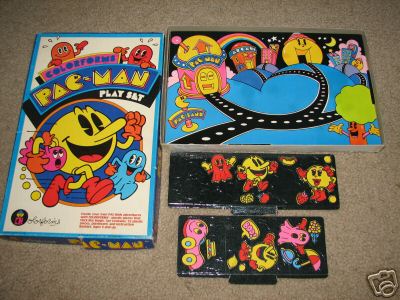 One of the most confusing things about the arcade boom of the 1980s is the oddball merchandising it spawned. Everyone loves Donkey Kong, but did we really need a cereal based on it? Likewise, toys inspired by video games were always stupid because they encouraged kids to play with an inferior product when the real thing was readily available. I realize that not everybody was fortunate enough to visit the arcade frequently, but even the most Dickensian Pac-fan knew someone who had the Atari version. So why anyone would choose to play with the various Pac-Man board games or this hunk o? crap is beyond me. Look, they didn?t even get the color of the ghosts right. And what?s up with the Somewhere in Dreamland rip-off background? I hope someone involved with Max Fleischer?s estate saw this and sued. 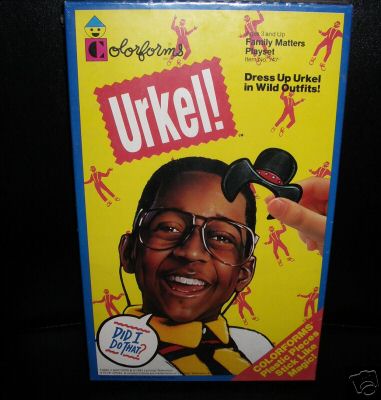 For a period in the late ?80s/early ?90s, ABC seemed determined to bring the catchphrase back to American comedy through its T.G.I.F. lineup. Completing a misery hat trick started by Dinosaurs? ?I?m the baby, gotta love me? and continued with Full House?s ?cut it out,? Family Matters gave us Steve Urkel?s ?did I do that?? Much has been made about how the Urkel character was not originally intended to be the focus of the show. Yet somehow he became the Bizarro World Fonz. At the height of his popularity, Urkel had his own cereal, a talking doll, a board game and this colorforms set which featured a lame illustration of Jaleel White?s TV alter ego that looked incredibly punchworthy. ?Did I do that?? If you mean make a world a bit more unbearable, then yes, Urkel, you sure did. 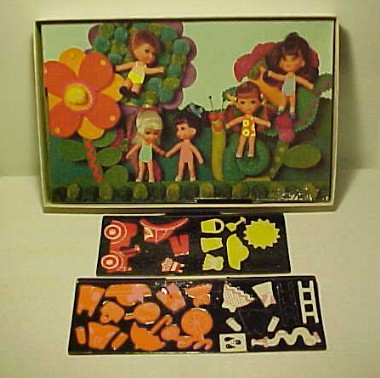 The name of this one alone gives me visions of being ushered into a room inhabited by a pitcher of sweet tea and Chris Hansen. Originally released by Mattel in 1966, Liddle Kiddles were tiny dolls with oversized heads and rooted hair. Oh yeah, they were also incredibly creepy. But they were a pocket-sized alternative to Barbie Dolls and girls couldn?t get enough of them.

This nightmarish toy features five of the soul-sucking playthings thrust into a psychedelic background straight out of Lidsville. The colorform pieces include various outfits for the diminutive hellions to wear, as well as vehicles for them to ride as they go about their daily business of making everyone feel uncomfortable. Located in the middle of the background is a snail with a shit-eating grin on his face. What?s he so happy for anyways? There?s nothing cool about being an ancillary spin-off of an obscure toy line. 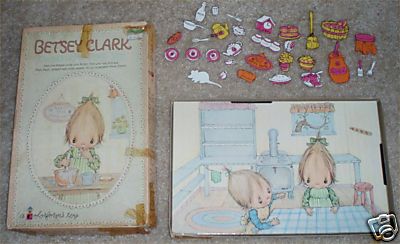 The same kind of ?I?m okay, you?re okay? thinking that gave us such cultural blights as Ziggy and Precious Moments figurines also resulted in this atrocity. Betsey Clark?s art is aces amongst the type of people who really dig angels and forwarding e-mails about terminally ill children with business card fetishes. No one should have to be subjected to it, especially the youngsters this set is targeted towards.

Foreshadowing the spinsterhood that awaits them, the background features two freakish girls sitting at a table by themselves. The various pieces that come with the set?kitchen utensils, baked goods, cleaning supplies?indicate that the young ladies are preparing for lives of domesticity. Unfortunately, the only guy who might be interested in them is Beldar Conehead, and last I heard he was taken. Since this set lacks robots, it?s clearly not aimed at me. But I would be more forgiving of its lameness if it wasn?t also sexist. By the time this was released in 1977, Mary Tyler Moore already taught girls that they were gonna make it after all. So why should they waste their time with Colorforms that reflect the cultural attitudes of a bygone era?