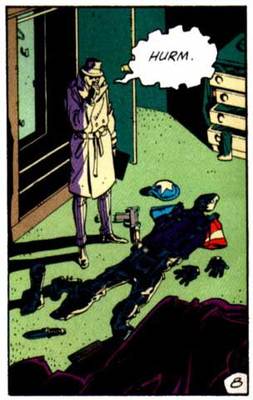 If you’ve ever thought to yourself, “Man, this Watchmen movie looks too good to be true,” go pat yourself on the back. And then get a box of tissues, because the tears are going to flow?the Watchmen movie is in serious, serious trouble.

As big sis Nikki Finke reports, Fox?who for years sat on their old Watchmen movie rights while everyone in hollywood took a stab at making the film?has suddenly decided that Warner Bros.’ upcoming film directed by Zack Snyder is infringing on their Watchmen movie rights, and are suing to get the new version from being released, and a Judge just allowed the suit to go to trial. While it might be some kind of power play from Fox to share in the profits, since everyone in Hollywood knows the film got great buzz at Comic Con, Fox has publicly stated their only goal is prevent the Watchmen movie from being released. Finke has this statement from Warner Bros.:

“The judge did not opine at all on the merits, other than to conclude that Fox satisfied the pleading requirements. We respectfully disagree with Fox’s position and do not believe they have any rights in and to this project.” But, privately, Warner Bros execs are decrying to me what they say is Fox’s “opportunistic claim,” noting that “Fox sat on its so-called rights for years while other studios in town developed this property. In fact, Paramount greenlit the movie for production and Fox never said a word! Fox even had an opportunity to re-acquire the project at some point and it passed on it!”

Hopefully, Warner Bros. will win the case, but god only knows how this will affect the film’s 2009 spring release. Still, you can bet there’s one guy whose happy?Alan Moore, who’s likely tossing back a celebratory pint even know. Hell, he might be having one with a Fox exec.