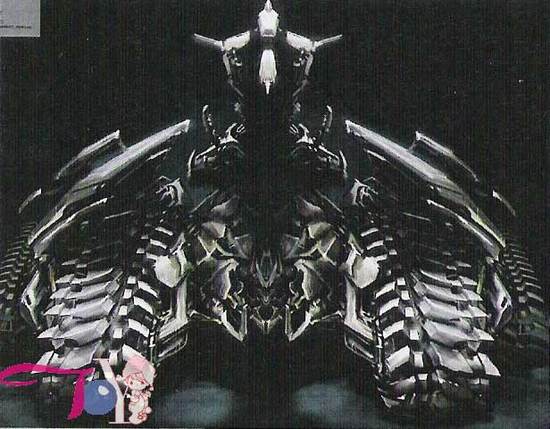 I had re-write this article three times, because the first two drafts were just endless strings of profanity. See, what you’re looking at in an unconfirmed picture of Megatron in Transformers 2, a.k.a. Revenge of the Fallen. As you might recall, Megatron was rumored to come back as a tank, which he’s been several times before. I had previously thought this would make him indistinguishable from the Transformer tank Brawl (although at least he would no longer be indistinguishable from his fellow jet Starscream). Of course, Bay had a plan, and that plan was to have Megatron turn into the “bitchingest” tank possible, i.e., no tank that has ever been used, built or conceived by a human being.

In my opinion, it looks too much like what passes for awesome in Bay’s head to be wrong?lots of tiny ridiculous pieces and spikes and unnecessary bits. Here’s the fundamental thing that Bay clearly does not get about the Transformers?they’re robots in disguise. All he cares about is big explosions; meanwhile, all the Transformers fans loved the way these robots turned into normal, every-day vehicles and items. No one on the planet would mistake Tank-otron up there as being something normal. And for that matter, what the hell was Scorponok’s deal in the first movie? Why was he the only Transformer with an animal mode and no vehicle mode? And why did he never turn into a robot? And why, oh why, am I still asking Michael Bay movies to make a damn bit of sense? (Via FilmDrunk)