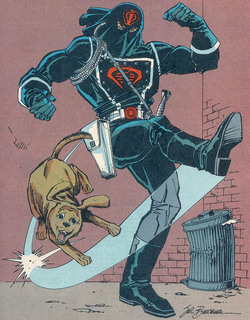 Everytime I start to forget all the dire news about the live-action G.I. Joe movie, something new leaks out and sends me into nerd rage all over again. Here I was, trying to enjoy a simple sixth scotch-and-soda on a Friday afternoon, when MTV posted the following interview from Joe producer Lorenzo di Bonaventura regarding Joseph Gordon-Levitt’s Cobra Commander:

?As we see it, he?s a very twisted character,? producer Lorenzo di Bonaventura exclaimed to MTV News, telling us the key to Cobra Commander lies in his gritty past?and that we?ll see every grimy piece of it. ?As the backstory evolves, you discover why his personality [is like that].?

While stopping short of drawing parallels between Gordon-Levitt?s PG-13 villain and that of Heath Ledger?s terrifying Joker, di Bonaventura does find one noteworthy comparison. ?I thought what was great in ?The Dark Knight? was that Heath kept telling you different stories [about his past]so you never knew what it was, and they were all spooky and crazy. [In our film] you get to see it, and you get to understand what?s happened to this guy.?

Well, I can see how THE FUCK?! So you think Ledger’s Joker’s lack of an origin was great. And so you’ll be giving Cobra Commander as clear an origin as possible in G.I. Joe. SIR, YOU MAKE NO SENSE. PLEASE STOP MAKING THIS MOVIE. (Spoiler Warning) Now, given that most reports have Cobra Commander?and it’s probably worth pointing out that Gordon-Levitt is 27, making his Cobra Commander very precocious to be leading a terrorist organization so young?as Duke’s childhood friend, di Bonaventura has found the one origin story that is stupider than the comics one about how he was a used car dealer named Fred.

Incidentally, di Bonaventura says that C.C. will have both a mask and a weird voice, but not the ones you grew up with and loved. Why would anybody do something to appease the fans? That never works!

While the film will draw from the comics for inspiration, di Bonaventura revealed that there?s one aspect from the cartoon that will carry over?the character?s unique voice. While it won?t exactly match the classic high-pitched wail from the show, the producer says Gordon-Levitt will leave his own vocal stamp on Cobra Commander. ?He has an interesting voice. He definitely has a take-off on that. I actually found the voice a little weak in the show?I?m sure I?ll get killed for saying that. I don?t know, it always seemed kind of silly. Hopefully we?re going to be a little more menacing.?

And while the character is widely known for his blue mask, don?t expect that to necessarily carry over in whole either. ?We?ll see Cobra Commander in the Cobra mask [but]it will not be like the show,? said di Bonaventura, who also promised they aren?t going to the comics for that one either. ?I found some of the [mask]aspects a little KKK for me,? he said, ?so we tried to steer away from that image. We thought that might be a little much.?