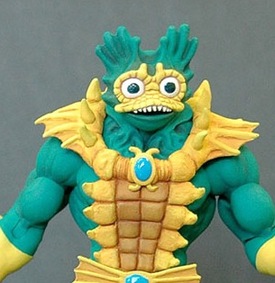 Good news and bad news for Masters of the Universe fans?well, actually, I suppose that’s just good news and regular news. First off, He-Man.org has pics of the new Masters of the Universe Classic Stratos figure, which…uh…looks just like the old Stratos figure (I’m not going to go into my little rant again, promise), Also, the first figures have been delayed until December, when Mattel will release both He-Man and Beast-Man simultaneously at MattyCollector.com. This might have been considered bad news, but since Mattel did it to fix a problem with the armor, I say better late than bad.

But the decidedly good news is that the Mer-Man figure will have two swappable heads, seen above, including the head he came with and the vastly different head he was advertised having on the back of the packaging. I have to admit, seeing the classic Mer-Man’s goofy fish/skunk/whatever noggin warmed even my cold black heart up to room temperature. And any day I can combine Masters of the Universe with Barbra Streisand movie titles is a good day in my book.