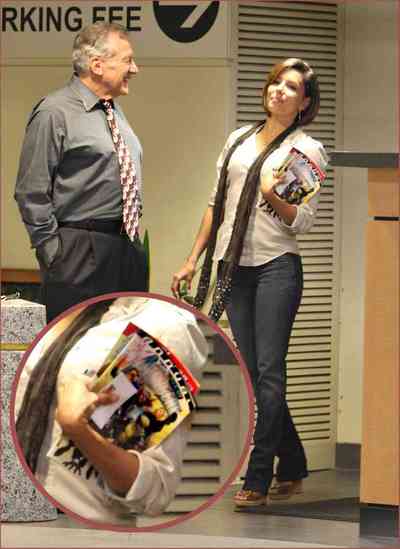 After so many totally bogus Batman 3 casting rumors spun out of thin air and wishful thinking, it’s actually kind of refreshing to post a casting rumor with a bit of substance to it, even if it’s not all that pleasant. Desperate Housewives star Eva Longoria was spotted leaving Marvel’s L.A. offices, clutching a stack of comics, at the top of which happened to be Avengers. You’re almost certainly thinking what everyone else is thinking?that Eva Longoria is just a huge fucking nerd, and stopped by to scam some free comics. But as it turns out, that’s not actually the case. So the next most likely solution is that Marvel is talking to her about playing the Wasp in the 2011 Avengers movie.

There are two sides to this. First off, it’s kind of a cool idea. The Wasp, a.k.a. Janet Van Dyne, was always to supposed to be a socialite and fashion designer, going to all the big Hollywood parties and changing her costume every few issues. When I read Avengers back in the ’80s, shockingly, the all-male nerd writers did a pretty shit job of conveying this, so hiring someone who actually does go to all the biig parties, wears the designer dresses, and is a spokesperson for a make-up line and such would go a long way to authenticating that side of the Wasp. It’s actually a pretty cool idea.

But the other side is that Eva Longoria seems like a thoroughly unlikeable person. Both her character on Desperate Housewives and, by all gossip accounts, Longoria in real life are both shrill, shrewish and kind of bitches?it should come as no surprise that her husband, basketball player Tony Parker, is rumored to be utterly at her mercy. It would seem like all the benefits of that upper-class, fashionista socialiteness that Longoria could bring would be negated by her reprehensible screen presence.

We don’t really need to worry; while Longoria may have stopped by Marvel, I imagine they’re going to hire a Captain America well before the Wasp, since the Cap movie comes out before the Avengers. However, Longoria was inside Marvel, and came out with an Avengers comic. So there’s an infinitely greater basis in fact for this rumor than anything said about Batman 3. (Pics from OhNoTheyDidnt)