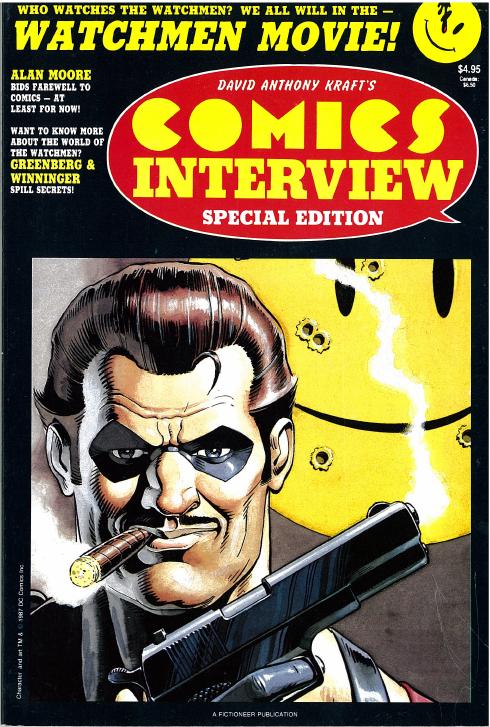 Hee hee! Oh, Alan Moore. So mistreated by the big meanies of Hollywood that you not only refuse to do business with them, but has sworn off the entire medium of cinema. Well, Movies Without Pity has found evidence of a mystical time?called 1987 by some folks?when Alan Moore was a bright-eyed and bushy-tailed comics writer, just starting to get recognized for his fine work, and when his beard only contained one small family of swallows. Oh, and it’s also when he was totally excited about his upcoming Watchmen movie. From a 1987 Comics Interview magazine:

Alan: I have got as much confidence as it is possible to have in the people who are handling the Watchmen film. Sam Hamm is an excellent screenwriter, he’s been signed to write the Watchmen film. I think that it’s got, therefore, as good a chance as any of being a good film …

Darrel: I hadn’t known there was a film in the works.

Alan: Yeah, 20th Century Fox have optioned Watchmen as a film. The producers are Joel Silver and Larry Gordon, who were the producers of 48 Hours. … I’ve spoken to Joel Silver, he seems very enthusiastic and has a good track record of getting films actually made. That said, of course, we’ve been hearing about Silver Surfer and X-Men films for the past 200 years to my certain knowledge. (Laughter.) Whether the film is actually made or not is completely in the air, and how it turns out is beyond my control.

Isn’t that awesome? But the best part is, Hamm’s 20-year-old script has been on the net for ages, and its fucking terrible. You need to check out Movies Without Pity for a longer list of highlights (and more of Moore’s old interview), but here’s one for starters:

The script begins with a prologue about terrorists taking hostages at the Statue of Liberty during the 1976 bicentennial celebrations. Adrian Veidt (never referred to as Ozymandias) leads a superhero team actually called “The Watchmen” to stop them. During the rescue attempt, the Comedian intentionally kills a hostage that’s being used as shield by a terrorist. He quips, “The joke’s on you.”

And that’s not even close to the worst part. Go?enjoy. But come back, because I have one more nugget of mean-spirited joy for you in just a bit.