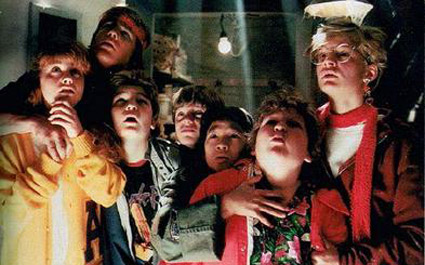 Was it only two months ago that Warner Bros. had announced The Goonies 2 as one of their big 2010 releases? (It was.) I don’t know why anyone pays attention to those announcements, because just because a studio says they’re doing something has no bearing on whether they’re actually going to do it. For instance, Goonies 2 ain’t happening. From Variety:

Rumors have been swirling for years about a “Goonies” sequel, but Richard Donner says his most recent attempt simply didn’t pan out. “We tried really hard, and Steven (Spielberg) said, ‘Let’s do it.’ We had a lot of young writers submit work, but it just didn’t seem to call for it,” he explains.

What dark god did Corey Feldman sell his soul to that gave him such fame at such a young age, then took it away so abruptly, and taken every chance for him to return to the public spotlight and crushed it or worse, released it directly-to-DVD? Because I think it’s hilarious. Oh, Donner says he’s in talks to make a Goonies musical, which makes me preemptively sick of the “Truffle Shuffle” extended dance routine. Give me a musical based on Adventures in Babysitting any day. That little girl thinks she’s Thor! That’s hilarious!