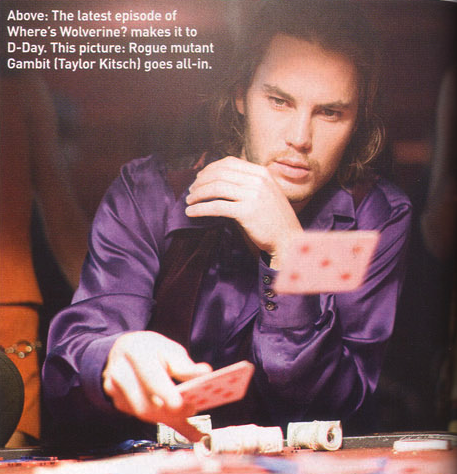 Empire finally snagged a pic of Gambit from the upcoming X-Men Origins: Wolverine movie, and  if you had any doubt that Gambit is a ridiculous character, I hope this picture sets your minds at ease. I’m not taking about his long, flowing locks, since actor Taylor Kitsch has had those on his day gig on Friday Night Lights and had the ladies swooning–plus, /Film has a pretty good Gambit drawing of the Ragin’ Cajun’ with the same hair. I am, however, talking about the purple, button-down, satin shirt which is clearly supposed to imply Gambit’s superhero outfit. Purple button-downs are a terrible idea which look sleazy at best and  demonstrate your complete lack of style and fashion at worst. Want to know how I know? I had two. (Via IESB)