Menu
Home
>
Cartoons
>
The 10 Lamest Cartoons Based on TV Shows 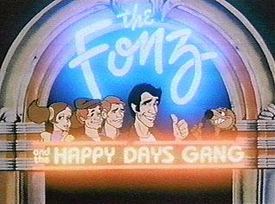 With the notable exception of the Star Trek animated series, cartoon spin-offs of popular TV shows are pretty much unwatchable. Lousy with reused background footage and scripts penned by monkeys/invalids, these crapfests feature familiar characters getting thrown into “cool” new environments (i.e. outer space) where they meet “cool” new characters (i.e. talking animals) and have adventures that often culminate in a psychedelic musical number. It’s unclear if the Raison d’?tres of these shows were to get kids interested in their live action counterparts or simply just to inflict suffering over the airwaves a la Videodrome. Either way, audiences haven’t had to endure too many of these nonsensical toons since the FCC lifted the regulations prohibiting toy companies to make shows based on their products in 1984. As you will soon learn, this is a very good thing indeed. So hop aboard your cartoon spaceship and let’s take a look at ten horrible cartoons that were inspired by prime-time favorites.

From The Flintstones to Scooby-Doo and beyond, Hanna-Barbera has given us some of the finest cartoons ever made. So it’s especially sad that they were also responsible for this shameless rip-off of The Jetsons that transported the Partridges to the year 2200. Here’s the thing, much like Quentin Tarantino claims that there are Elvis people and Beatles people, there are folks who prefer the Partridges over the Bradys. These people shouldn’t be trusted and, if at all possible, you should monitor their activities and report any suspicious behavior to your local authorities. It has been scientifically proven that The Partridge Family show is responsible for such global problems as hunger, drought and erectile dysfunction. So clearly, it’s something to be avoided. Same goes for this cartoon. But if you have ever wondered what would happen if the chirpy musical family somehow got transported to a utopian future where they owned a bullshit robotic dog and sperformed hateful bubblegum pop, go right on ahead and watch the above clip. But realize that we here at Topless Robot can’t be held responsible for your actions.

In the golden days before Max Wright was photographed smoking crack, ALF was a pop culture empire that encompassed a hit NBC series, a successful Marvel comic and endless pieces of merchandise. At the height of his popularity, he starred in two Saturday morning cartoons–ALF: The Animated Series, which chronicled the alien’s adventures on his home planet of Melmac, and ALF Tales. Over the course of 21 episodes, the series featured skewed recreations of stories ranging from Robin Hood to The Wizard of Oz. By the time the show’s second season had begun to air in September of 1989, the viewing public had grown tired of jokes about cat-eating and ALF Tales left the airwaves shortly thereafter. Fun fact: thanks to the unreliability of nostalgia, many folks actually still believe that ALF was funny.

Ignoring the fact that what made My Favorite Martian so great was the interaction between stars Ray Walston and Bill Bixby, this 1973-75 animated follow-up featured Uncle Martin (now voiced by Lost in Space‘s Jonathan Harris) continuing his exploration of humanity with the aid of his clueless nephew Andromeda. Like many of the other shows on this list, My Favorite Martians features a wacky pet sidekick whose sole point of existing is to provide comic relief. Why cartoons that were supposed to be funny in the first place needed these types of characters at all remains a mystery worthy of In Search Of.

“Yes sir, the Duke Boys and Daisy are racin’ ol’ Boss Hogg clear around the world and they got to win the prize money so’s Boss can’t foreclose on the family farm. Naturally greedy ol’ Boss wants the farm and the money for himself so he’s been a-cheating and a-scheming every foot of the way.” Spoken by a cartoony Uncle Jesse, those words began this 1983 spin-off to The Dukes of Hazzard. A low-rent Wacky Races, The Dukes is noteworthy for focusing on the universally hated Coy and Vance characters (thanks to a contract dispute, John Schneider and Tom Wopat didn’t begin appearing as Bo and Luke until the middle of the show’s first and only season). Perhaps the only saving grace of the show is how it made Boss Hogg’s opening credits declaration of “Oh them Dukes!” a catchphrase at schoolyards throughout the 1980s.

If you Partridge Family fans think this list was a bit too harsh on your beloved show, maybe you’ll take a small bit of comfort in learning that The Brady Kids toon was shite too. Airing on ABC from 1972 to 1974, it featured Marcia, Jan, Cindy, Greg, Peter and Bobby hanging out in their tree house along with their magical mynah bird Marlon, their pet pandas Ping and Pong and their dog Mop Top. (Whither Tiger?) Weirdly enough, the show never featured Mike and Carol Brady or Alice, leading some viewers to speculate that the toon was set in a dark alternate reality where Marlon took on the guise of a dimwit and used his wizard powers to kill the elder Bradys before casting a mind control spell on the children to carry out his evil plans for world domination.

It’s Gilligan’s Island, in space! Even though 1974’s The New Adventures of Gilligan cartoon was a failure, Filmation was determined to bring back the castaways for another Saturday morning series. This time around, Gilligan and company managed to escape from their island prison after the Professor built a spaceship. Of course, madcap antics ensued and the gang became marooned on a distant planet that was inhabited by extraterrestrial troublemakers who seemed to be carbon copies of the sort of folks who used to cause them so much trouble back on Earth. The repetitive stories quickly took their toll and not even voice work from the entire original cast (except for Tina Louise) could rescue this cartoon from cancellation after one season.

Punky Brewst
er was so inoffensive that it made Diff’rent Strokes look like Taxi Driver by comparison. So it’s something of a minor miracle that this cartoon spin-off actually manages to be even more saccharine than the original show. In the cartoon, Punky encounters a creature named Glomer who has the ability to transport her across the Earth and make all of her wishes come true. So each episode Punky and her pals use Glomer’s abilities, get in trouble, then make things right again. Remember kids, if you have a magical pal, be sure to exploit him for your own gain. That’s one to grow on!

This holy trinity of bad cartoons based on TV shows is a no-brainer for making it to this list’s top spots. The nightmare began in November of 1980, when The Fonz and the Happy Days Gang debuted on ABC. In one of the dumbest premises ever, the Fonz, Richie Cunningham and Ralph Malph encounter a whore from the future named Cupkake and get stuck traveling through time with her. Joined by the Fonz’s dog Mr. Cool (the inspiration for The Simpsons‘ Poochie), the guys try to make it back to 1957 Milwaukee. Hilarity doesn’t follow. The series was initially so popular, that it led to the commissioning of Laverne & Shirley, a 1981 cartoon in which the girls join the Army and serve under Sgt. Squealy–a pig with the voice of Horshack himself, Ron Palillo. The next year, the Fonz and Mr. Cool teamed up with Laverne and Shirley and, in a stand alone cartoon, Mork for The Mork & Mindy/Laverne & Shirley with the Fonz Hour. The most traditional cartoon on this list, Mork & Mindy featured a teenaged version of the Orkan living with Mindy and her father while attending high school and hanging out with his alien dog Doing and his pal Eugene. This televisual hat trick of misery lasted for one season before it was finally, and mercifully, cancelled. Since then, these three shows have become case studies in how insipid kids shows can truly be.