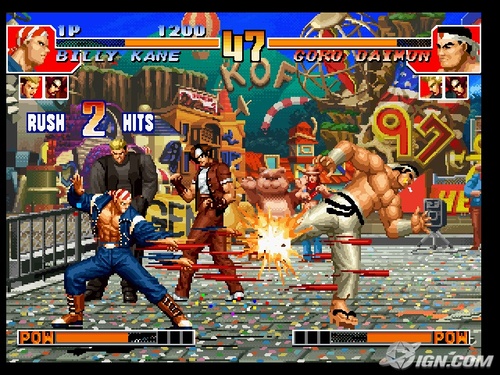 Unless you’re a reasonably hardcore gamer, if there’s any chance you remember the King of Fighters games, it’s as 1) a much less popular Street Fighter or 2) because of Mai Shiranui, the character who was fighting people with her ludicrously large breasts well before Dead or Alive or Soul Calibur came to town. I know the series has some popularity in Japan, but in America, the games usually sell for like $30 or so. But of course, this is still more than enough reason for some morons to make a live-action film based on it. From The Movie Set:

The King of Fighters movie quietly began filming in
Vancouver, Canada on November 27 under the eye of director Gordon Chan,
the dynamic Hong Kong-born helmer of Fist of Legend, Beast Cop and the
2003 Jackie Chan movie The Medallion. The screenplay is by newcomer Rita Augustine.The movie stars Maggie Q (Live Free and Die Hard), Sean Faris (Never Back Down), Will Yun Lee (Elektra), Francoise Yip (Aliens vs. Predator – Requiem), Monique Ganderton (Supernatural) and the coolest Sith Lord ever, Ray Park (a.k.a. Darth Maul from Star Wars: The Phantom Menace).
It also looks like the King of Fighters
movie will introduce a new science fiction spin into the setting
established in the games’ universe by following the surviving members
of three legendary fighting clans who are continually whisked away to
other dimensions by an evil power. As the fighters enter each new world
they battle that universe’s native defenders, while the force that
brought them seeks to find a way to invade and infect our world

There’s so much wrong with this I can barely see straight. First of all, almost no one cares about King of Fighters, and the few who do only care about Mai’s breasts. Second, someone actually made a movie a more popular fighting game series, Dead or Alive, which mercifully went straight to DVD (actually, I saw it, and it was kind of fun in a wretched kind of way). Third, why in the fucking world would you decide to make a King of Fighters movie, and then add some kind of bull-shit science premise to it? Why not just make your own terrible movie, and not pay the licensing fee to SNK and their game series 95% of the world has never heard of? Why piss off the 300 or so insane King of Fighters fans who would actually be willing to pay money to see a KoF movie by shooting them into space for no goddamn reason?