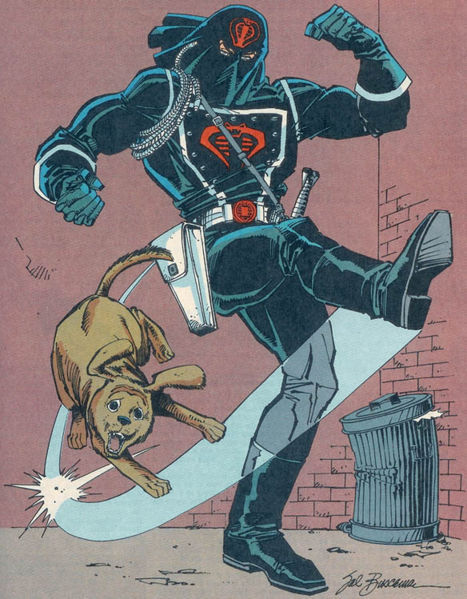 Update: The pics are gone. Paramount apparently freaked out, forcing Hasbro to ask me kindly to take the filecards down, which I always appreciate more than threats. The original text is now all after the jump; I’m sure you can find the pics online if you’re determined, but you have my solemn promise that seeing them won’t bring you any happiness whatsoever. Also, there’s a huge movie spoiler still at the end of this article, so don’t go lookin’ if you don’t wanna know.

When I saw those new live-action G.I. Joe movie posters earlier this week, I thought I knew how bad the flick could get. I was wrong. So, so wrong. See, the guys over at Hisstank
have found the filecards for the movie characters — I believe they
found them at the ongoing UK ToyFair, although I can’t be sure, and it
turns out that Snake Eyes’ sensible slacks are not the issue. These are the issues:

This
is Breaker, played by Said Taghmaoui. Why he looks like he’s rocking
the bowl-cut/pencil-thin mustache combo last popular in 1978, I have no
idea. I’m utterly afraid t oask what that ridiculous laser-sight thing
is, or how it could possible help him “hack into firewalls,” but there
are bigger problems.

This is Zartan. FUCKING ZARTAN.
For some reason, I was actually stupid enough to think that Zartan
would have some sort of eye make-up, as a nod to his original character
design. Then I hit myself for being an idiot. Instead, Arnold Vosloo’s
Zartan looks like a gym teacher from the ’50s, and the fact the
filecard photo captured him with a look of utter uncomprehending
confusion (complete with mouth open) is the icing on the cake. BUT
WAIT, THERE’S MORE.

This
is “The Doctor,” First of all, HE’S CALLED THE FUCKING DOCTOR. Second
of all, he looks like a villain from a low-budget ’70s sci-fi flick, or
an ’80s flick from Roger Corman. Seriously, I cannot look at him any
see anything even slightly less cheesy than what was seen in Corman’s
infamous Fantastic Four TV movie. Bleagh. But that’s not the worst part, still. The worst part is an enormous spoiler, so it’s going to be after the jump.This is going to sting, so abandon all hope ye who hit “continue reading.”

Head over the movie’s IMDB page, and you will find no one is listed as playing “The Doctor.” Why? Because according to /Film, “The Doctor” is played by none other than Joseph Gordon-Levitt, which means “The Doctor” is actually COBRA COMMANDER.

Now, I don’t know if “The Doctor” becomes Cobra Commander later in the film and puts on a new outfit (although he know he won’t have the hood, because that looks too evil for the producers) or if this is actually what he’s going to look like through the entirety of the film. Does it matter? Is there any possible solution that ends with this not sucking huge mounds of ass? I don’t think so, people. Jesus.