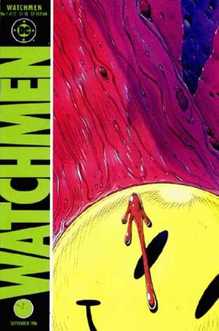 Unlike just about everything else in this fucked economy of ours, comic book and trade paperback sales were up, according to Diamond. While I don’t think diamond would lie, Diamond only handle the comic book stores of the world–which they have a stranglehold on for years–a drop in the bucket compared to the Barnes & Noble’s and Borders of the world. Still, any success is good, right?

Not for this asshole. You can see the Top 10s of both 2008’s comics and TPBs here, but I’d like to point out two things here. 1) Marvel dominated the single issue sales, with nine of the 10 entries. DC had the loner, Final Crisis #1 at the 9th rank. More amazingly, all eight issues of Secret Invasion made the Top 10, with X-Men #500 being the only other title on there. That’s well done, given that I’ve not heard of anybody actually liking Secret Invasion that much. But what I’d really like to commemorate is DC having two massive events, one with Batman R.I.P., starring their most popular character, and one being Final Crisis, which was supposed to rank up there with Crisis on infinite Earths for magnitude, and managed to have only one single issue on the year’s Top 10. Well done, guys.

But don’t applaud Marvel just yet. Because of the Top 10 trade paperbacks of 2008, Marvel had exactly zero. It was seven DC, two Image, and one Dark Horse (Buffy Season 8, which is admittedly pretty awesome). Now, DC rules because of Watchmen interest, and people buying Batman: The Killing Joke, Brian Azzarello’s new Joker GN and The Dark Knight Returns thanks to The Dark Knight movie. What is interesting to note that the Iron Man movie, despite making $318 million at the box office, apparently translated into zero Iron Man comic sales for Marvel. Way to not harness that immensely popular movie of yours, guys. It takes some real effort to make sure no one who liked the movie could find a way to get into Iron Man comics, but making him a total bastard who led Civil War then a utterly humorless fuck-up in Secret War did the job. And don’t you gloat, DC–sure Dark Knight sold a jillion trades, but I don’t see any love for Batman R.I.P. on these lists.

And a special note for Alan Moore. Yes, you’ve been a humorless bastard about the Watchmen movie and explained how it’s raping your comic forever. You certainly have a point with the merchandise. But the fact is a couple of trailers for  the Watchmen film–not the film, but the goddamn trailers–made Watchmen the #1 GN of the year. So maybe, just maybe you can admit that the Watchmen movie isn’t the worst thing in the universe. Grr.