Menu
Home
>
Miscellaneous
>
Most Disappointing Action Figure Ever: And the Winners Are…

I forgot one thing regarding last Friday’s TR Contest–namely, that I am a huge goddamn softie, and thus am easily devastated by my fellow nerds’ tales of woe. Oh, I still laughed at you all, but I identified with you all, and frankly, I’d like to give each of you a t-shirt, just to help heal the scars that still run so deep (in related news, it’s nice to have confirmation that TR readers are just as senselessly bitter as I am). Alas, I have not the shirts, but I would like to recognize:

? LAY, who felt guilty that his Manglorsaurus’ action feature was a total lie (been there)
? chapka, who was taunted infinitely by receiving the actual rocket-shooting Boba Fett figure, which his parents sent back after it was recalled and then received the crap Fett
? LBD “Nytetrayn,” as he’s clearly still upset about that damned Darkwing Duck figure
? The Red Queen, who made me realize how much the She-Ra line screwed over girls who liked the actual She-Ra concept and not fucking dolls (I feel most for you, Red Queen)
? ZeroCorpse, who recalls the day he found out toy companies reused molds and realized all adults were horrible liars
? Lo Pan, who foolishly thought a Jeff Goldblum figure would get him a girl and was man enough to tell us about it
? Evil Monkey Pope, since we’ve all broken a figure we had desperately wanted within two minutes of opening it
? Kyle Ferrer, who nearly killed himself with a TMNT catapult
? and Jeremy J, who honestly believed his rather racist grandmother was related to Michaelangelo the Turtle while in kindergarten and was also man enough to admit to us

But the two winners are Hamilton, for his amazing tale of White Power Ranger woe:

It was 1994 and the entire schoolhouse was being blitzed by the
latest television intrigue: Who was the White Power Ranger? The White
Ranger was badass, no doubt about it….[I bought] the White Ranger Action figure because I
assumed you could take off the helmet and see who was inside. This
assumption was fueled mostly by playground rumor. When I got it home
and out of the package I saw that the head was two pieces that were
secured together by a screw right in the middle of the back of the
helmet. This only added supporting evidence to my assumption that there
was a second head under the helmet. The next stop was the garage and I
went through every screw driver trying to find one that would fit the
damned child-safe screw. My parents had a lot of screwdrivers and this
took several hours of frustration. After none of the screwdrivers
worked, and reasoning that my guy didn’t really need a helmet anyway, I
grabbed a hammer. Yeah…

I brained that goddamned figure like I was Hephaestus and the helmet
shattered into a million jagged little pieces. It should go without
saying that there was no second head under the helmet. That night I
quietly sobbed myself to sleep. 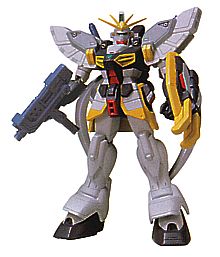 In the box they looked like a Gundam fan’s wet dream: wonderfully
detailed, tight articulation, accessories out the wazoo. So you buy the
whole set, or maybe two of each so you can enjoy that still-in-the-box
feel while having something to play with. You open the first one,
already picturing your coffee table as a destruction-waged battlefield.
All too true, as you discover the first figure you open COMPLETELY
FALLS APART.

Surely this is a mistake? Some sort of factory defect. You tear into
another, then another. Soon, all your tiny Gundams lie around you in
differing heaps, their tiny gundanium legs popping out of their tiny
gundanium sockets, their blaster cannons and hyper jammers laying in a
rain of parts at you feet, like bitter plastic tears. You try to make
it work. You try, but there it nothing short of soldering that would
keep these toys’ little bodies together. Weeping, you box them up and
put them out of your mind and into the very back of your closet.

Eight years later, you find that box, look into it, and tell
yourself no more. No more will you hold on to these little bodies and
mourn. It’s time they rested. You drop them off at your nearest
Goodwill, hoping they will be bought, maybe by some 7 year-old shit
that doesn’t even know what the fuck a Gundam is. Meanwhile you wonder
what the poor Goodwill clerk is going to think when he/she opens a box
of severed mecha limbs and parts, all mixed up together in a mass grave
of pain and shattered happiness. Maybe he/she leaves the box as is: a
solemn memory of the tragedy. Or maybe he/she make one puny attempt at
putting the tiny Gundam World back together before going off and
Self-Destructing.

Well done, all of you, and thank you for sharing your pain. I have zero doubt that I have the most appropriate readers in the blogotuberspherehighway.