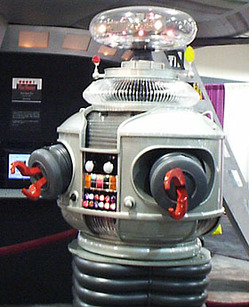 Well, more specifically Bob May, the guy inside Robot B-9 for the duration of the popular Lost In Space show (not the shit-tastic 1998 movie). May died yesterday of congestive heart failure at the age of 69. From Yahoo:

“He always said he got the job because he fit in the robot suit,” said June Lockhart, who played family matriarch Maureen Robinson. “It was one of those wonderful Hollywood stories.
He just happened to be on the studio lot when someone saw him and sent
him to see Irwin Allen about the part. Allen said, ‘If you can fit in
the suit, you’ve got the job.”

He was apparently quite the smoker.

Lockhart said May wore the suit for hours at a time and learned the
lines of every actor in the show so he would know when to respond to
their cues. Because it wasn’t easy to get in and out of the suit, he
kept it on during breaks. “He was a
smoker,” Lockhart remembered. “From time to time (when he was on a
break), we’d see smoke coming out of the robot. That always amused us.”

I’ll tell you this–Will Robinson is totally fucked without his mobile danger alarm.