They’re the bane of many an action figure collector’s existence–repaints. That’s when a manufacturer takes an existing action figure, paints it in all-new colors and tries to pass it off as a new figure, such as “Arctic Batman.” This allows the company to squeeze a little more profit out of the expensive mold they created for the original figure. Collectors hate them, kids are indifferent to them and the figures warm the pegs. But once in a while, a figure is repainted (along with a few minor tweaks) and is passed off not as just a new figure, but a brand-new character. The results are often laughable but, once in a while, kinda cool.

10) Stinkor from Masters of the Universe 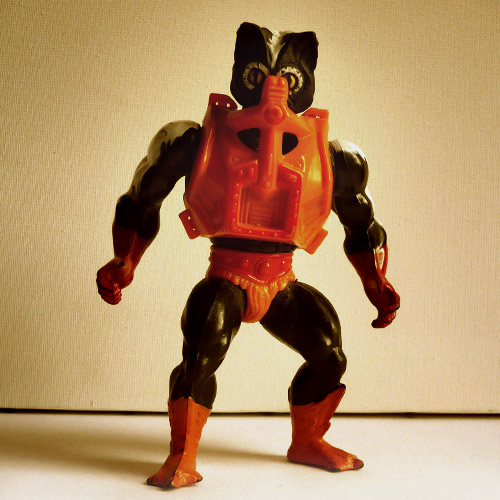 In the 1970s and early 1980s, Mattel was arguably king of the repainted action figure. The early waves of their Masters of the Universe line were made from the same four body types (human, hairy, reptilian, and female) with different heads, armor, colors and weapons. However, once in a while a character didn’t even get a new head sculpt. Such was the case of Mer-man and Stinkor.

Looking at the vaguely mammalian face, you might be tempted to think Stinkor came first and Mer-man was the repaint. But you’d be wrong, and roundly mocked for your assumption. Mer-Man was released a good three years before Stinkor made his smelly debut. And yet, Mer-Man’s face didn’t look anything like the art on the back of his package, muddying the waters even more (pun intended). So technically, Stinkor was the repaint, although he looked more like a skunk than Mer-man did a fish.

9) The Riddler from DC Super Heroes 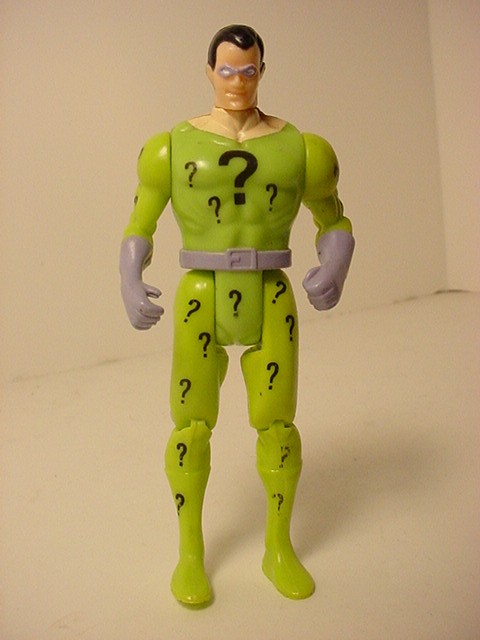 Long before they brought us Marvel Legends–before they even had a single Marvel license–toy manufacturer Toy Biz had the rights to the DC Super Hero universe. Many of the figures were simply reissues of Kenner’s mid-1980s Super Powers figures, using the same molds. Eventually Toy Biz created some new sculpts for the later figures, but the earlier waves stuck to pre-established Super Powers characters–except for the Riddler.

Owing to the success of the Batman movie, Toy Biz wanted to pack as many Bat-villains into the line as possible. Unfortunately, Kenner had never made a Riddler, so Toy Biz mixed and matched pieces from two Super Powers molds, Green Lantern and the Flash, and tossed on a new head. Note the question mark on his groin–what’s that about? What are we supposed to be guessing? Never mind, we almost certainly don’t want to know.

8) Battle Cat from Masters of the Universe 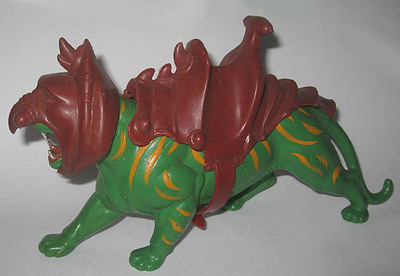 Mattel makes its second appearance on this list with a rare case where the repaint is much, much more famous than the original figure. Stop a few thirty-something guys on the street and you might find one or two who remember a line called Big Jim, a hero in the style of the original G.I. Joe or Action Jackson who was often packaged in all sorts of adventure sets featuring exotic and dangerous animals. One such set was Big Jim on the Tiger Trail, which came with a modest-sized (compared to Big Jim) tiger toy.

A few years later, Mattel needed a steed for their brand-new action hero, He-Man. What to use? A horse? Nah, too clich?. A dragon? Been done (see Blackstar). Then it hit them–they already had a tiger mold–why not a tiger? And let’s make him green, with yellow stripes, and throw some wacky armor on him and no one will be the wiser (well, except for obsessive toy collecting nerds twenty years hence). Thus was Battle Cat born. A falcon from the Big Jim line also became Zoar and Screech. 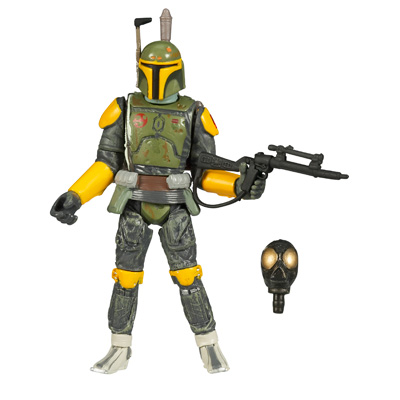 You can’t really blame Hasbro for making Jodo Kast. Blame the makers of the Star Wars Roleplaying Game, who created Kast as a weaker version of Fett so novice players could whack a Fett stand-in without taking the real bounty hunter out of the SW universe before his scheduled date with doom in the Sarlacc. Kast was later written in to the Star Wars canon only to be brutally murdered by Fett himself.

In terms of an action figure, they’re the same guy. There is practically no difference between a Boba Fett action figure and a Jodo Kast action figure except a few colors and the fact that one of them is dead. But due to Star Wars fans’ obsessive love for all things Fett, this store-brand Boba got his own figure this year as part of Hasbro’s Legacy Collection. Yet again, George Lucas cashes in on his fans’ blind possessiveness.

6) Thomas Riker from Star Trek: The Next Generation 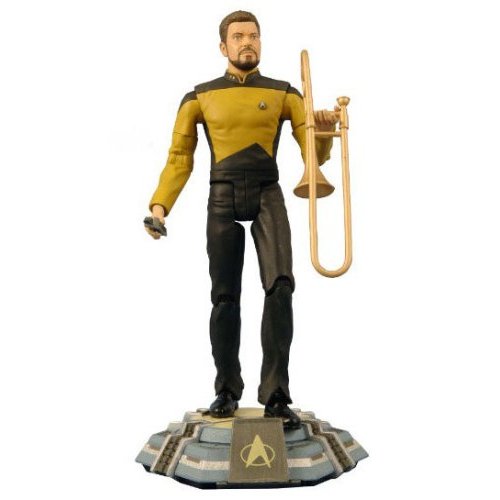 OK, this one is cheating a little: technically, Thomas Riker and Will Riker are the same person. On the other hand, wasn’t the whole point of that episode that the two men had developed different personalities? One of them liked their middle name and one didn’t! That’s like night and day, if you ask me. In any event, all it took Art Asylum to make a Thomas Riker figure was a quick uniform repaint and a few different accessories. Even the different sets of rank pips were just painted on. 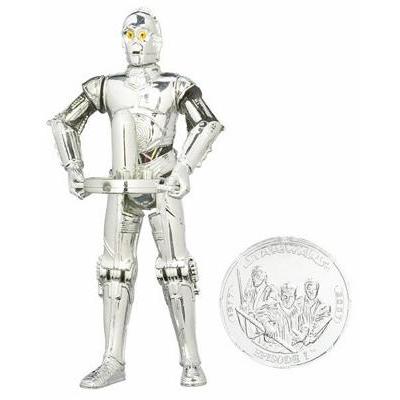 Again, you can’t entirely blame the toy company for this one. Hasbro just took advantage of an existing rip-off in the Star Wars universe. While there were a few silver C-3POs sprinkled throughout the original trilogy (on the Blockade Runner in A New Hope, and on Cloud City in The Empire Strikes Back), Kenner somehow managed not to make one, despite making a figure of anyone else who had ten nanoseconds or more of screen time. It wasn’t until The Phantom Menace that Hasbro saw fit to give us TC-14.

Despite looking identical to C-3PO, TC-14 was apparently a chick. And yes, the figure was just a silver repaint of C-3PO, although the hands were re-sculpted to hold a serving tray. So C-3PO gets to go on countless galactic adventures and his female counterpart serves drinks? Who wasn’t George Lucas trying to offend with Phantom Menace? Incidentally, this mold showed up yet again as a white K-3PO.

4) Starscream, Skywarp and Thundercracker from Transformers 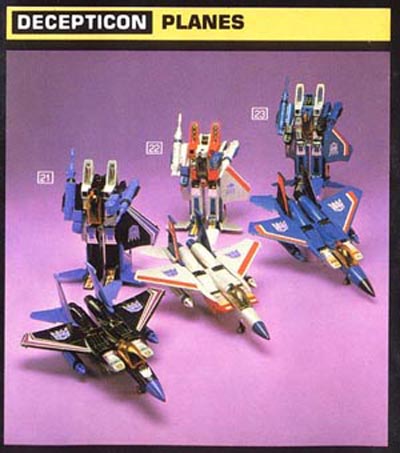 When they brought Takara’s Transformers toys to U.S. shores, Hasbro learned a valuable lesson: change a few colors on a figure, slap another name on it and kids will beg their parents for two (or more) of the exact same toy. I couldn’t even tell you whether Starscream, Skywarp or Thundercracker came “first” (although I suspect some commenter will know below). 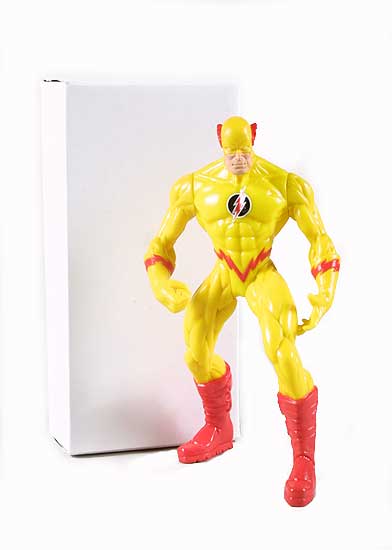 2) Faker from Masters of the Universe

What was I just saying about evil twins? Few repaints are more infamous than “Faker,” the “Evil Robot of Skeletor” who was apparently intended to fool the good guys into thinking he was the real He-Man. Since the real He-Man didn’t have orange hair, didn’t wear an orange version of Skeletor’s armor, didn’t carry an orange Power Sword and, most importantly, wasn’t blue, it seems unlikely even the stupidest Eternian (Ram-Man) would have mistaken Faker for Prince Adam’s well-tanned alter ego. Nonetheless, this goofy repaint has long been a fan favorite and will receive its third incarnation next year as part of the Masters of the Universe Classics line. Don’t think of him as an evil twin–think of him as more of a Bizarro He-Man. 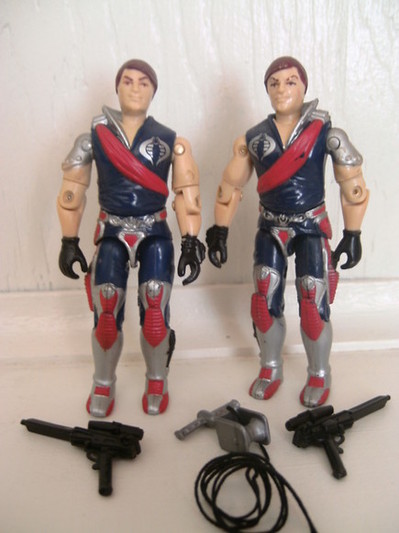 It takes some muchos huevos grandes to sell a repaint figure in the exact same package as the original, but that’s what Hasbro did in 1985 with this two-pack. Now, it doesn’t matter which one came first (though I expect, no, demand that a commenter inform me that one was born five minutes before the other according to Joepedia or something); we can’t really say who is the original and who is the repaint. The point is, parents actually paid for two figures who were more or less identical. That said, at least Tomax and Xamot were real twins, making the mold re-use somewhat legit, and they did have some unique sculpting–their sashes faced different directions and their hair was parted differently. Night and day, really. Like Faker, they’ve had a few reissues and resculpts over the years, but their status as glorified repaints of each other remains.