Menu
Home
>
Merchandise
>
Who Wants to Smell Like a Rutting Vulcan? 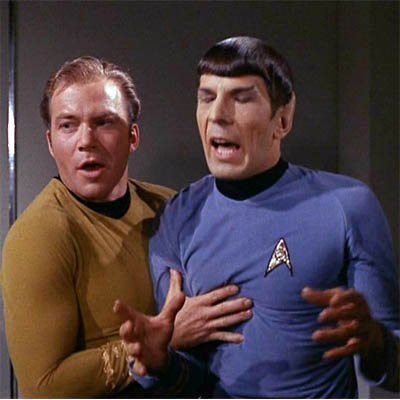 We’ve had a lot of fun imaginging Alan Moore’s homicidal rage at the plethora of Watchmen movie merchandise over the last few months, but it takes a massive franchise relaunch like Star Trek to remind us that Watchmen is really just a small fish in a very large barrel. We’ve seen the horrible toys from Playmates, of course, but TrekMovie.com has a list of other upcoming products for the upcoming flick, including Star Trek Monopoly, bobbleheads, posters, apparel, jewelry, cookie jars, cufflinks, and much, much more. It’s all a bit ridiculous, until…

GenkiWear, LLC is developing a trio of fragrances celebrating classic
Star Trek. “Tiberius,” “Pon Farr” and “Red Shirt” fragrances will be
available in stores in the spring

I am not prepared to live in a world wear there is Star Trek-themed perfume, okay? Forget the “Red Shirt” one, because it assumably will smell like sweat and fear and having just pissed yourself in fear, but “Pon Farr”? The Vulcan mating time, when they basically hump anything that moves? How was this not recognized as the worst idea in the entire world immediately? Also, how can you wear a scent based on James T. Kirk, the galaxy’s greatest poonhound, and not get fucked to death by hot green-skinned alien women?

Okay, “Tiberius” might be okay. But I highly disapprove of the others.