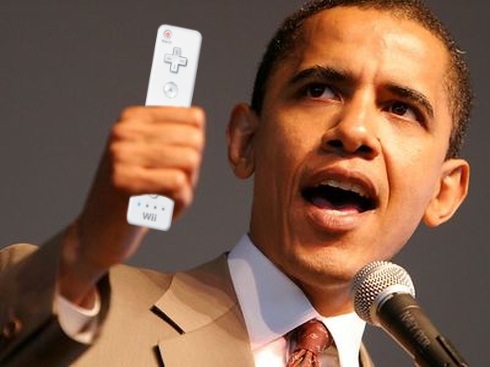 I’m always worried about posting anything even slightly to do with politics, because while I’ll allow insane nerd arguments on TR (because I’d have 75% less posts if I didn’t), I have no desire for political arguments. So I’ll preface this post with the same thing I did with the last Obama post–whether you’re Democrat or Republican, you are a nerd, and it should be cool to see Obama nerd up the highest office in the land.

The new news is that he bought his daughters a Wii for Christmas, and the New York Times says he’ll be bringing it to the White House when he’s sworn in. Of course, I wouldn’t have bothered mentioned this if Obama hadn’t been playing it too, specifically Wii bowling. From NYT:

Mr. Obama said he’d have his hands full attempting to rescue the
American economy. But he has gotten in a little practice in bowling
lately on the Nintendo Wii his daughters received for Christmas. Mr.
Obama, who famously struggled in bowling during last year’s Democratic
primaries, said he performs better in the video game.

So…yeah. For the first time, by all appearances, this will be the first videogame console in the White House, as well as the first President to play videogames. I doubt this will affect his stewardship of the nation much, but I’ve got to wonder what the President Elect’s Mii looks like. The pic is from Viral Nerd, by the way.