Menu
Home
>
Movies
>
If Terminators Have Fist Missiles, Then What the @#$% Are Those Guns For 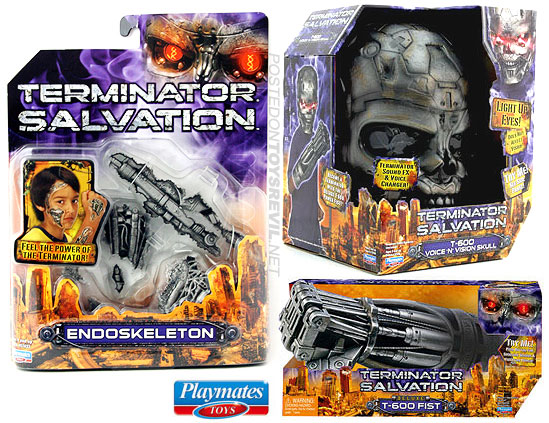 Playmates might have screwed the proverbial Tribble with its horrible Star Trek movie toys, but…well, their Terminator action figures look pretty horrible, too. But they have made these unbelievably awesome Terminator: Salvation role-play toys, which fill me with a great and abiding joy. Well, not so much the T-600 voice-changing mask, but the Endoskeleton bits, which you can glue to children to make them look like cyborgs. Also, thee T-600 fist missile, as I love things which fire their fists at other things. 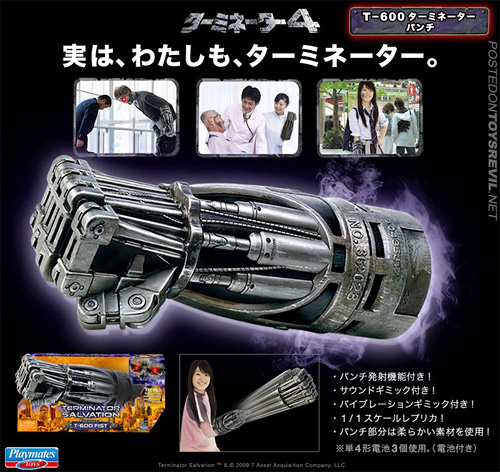 Does this happen in the movie? Was there a whole production line of Terminators that shot their fists at John Connor, and then had to stand around getting shot while their fists lay several hundred yards away? Is this why all the Terminators now carry guns? That would make sense. But nothing, nothing will ever make sense about the pictures on this Japanese advertisement for the Terminator toys; I cannot tell you how much I love the dude in the T-600 mask bowing to his boss, or the incredibly cheery girl shooting her robot fist. Ah, Japan. Sometimes you don’t make me sad! Check out a few more delightfully Japanese pics over at Gizmodo.