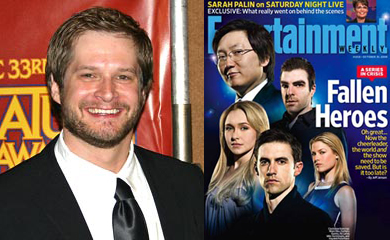 All right, Heroes fans
watchers. Tonight’s the night. After 18 episodes of some of the most
inconsistent characters and consistently awful storytelling on TV, Heroes might finally turn around now that Pushing Daisies‘
Bryan Fuller has returned to take charge of the show. I don’t want to
get too optimistic; I mean, it’s only his first episode back and he’s
got to deal with the stupidity of the season so far, not least of which
includes Hiro and Ando stuck babysitting and Claire getting ogled by
mouth-breathing comic store patrons; plus, there’s only so much one man
can do. However, if tonight’s episode does not fill me with hate and
rage, I’ll consider it a major step up from the rest of the season. As
always, come by at 8:50 pm EST for TR‘s Heroes live-blog, where, if the episode is actually good, we’ll be confused and awkward and quiet… for once.

Oh, lest I forget, here’s a video that’s much, much better than Heroes, straight from Norway:

Bizarre? Yes. But it didn’t make me feel dumber for having watched it, which means it’s better than both Heroes seasons 2 and 3… so far. (Via io9)