Franz Kafka was not a happy guy. He was emotionally abused by his parents. He contracted tuberculous at the age of 34. He wrote very dark, very depressing stories, such as Metamorphosis, in which a man awakens to find himself a giant insect loathed by his friends and family (and then his day really gets depressing). At the end of his life, Kafka asked a friend to burn all of his unpublished works because he thought they were terrible.

Clearly, what Kafka needed to cheer himself up was a decent videogame console (and maybe some antidepressants). Had the famed Czech writer lived to see the golden age of videogames, he almost certainly would have been more cheerful — plus, he would have been a hundred years old, which couldn’t hurt. Here now, based on this bizarre and shockingly tenuous premise, are the descriptions of what would have surely been his favorite classic videogames, had he been alive to describe them. 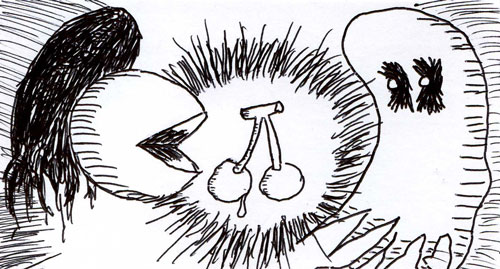 An endlessly chomping yellow sphere is trapped in a labyrinth, pursued by four ghosts of the damned who mean to bring about his destruction. He occasionally can eat a smaller, blinking sphere which allows him to enact revenge upon his tormentors by consuming them, but the respite is brief – the agents of the damned re-emerge from their crypt only to continue the pursuit. This goes on in an endless series of chases, which end in the yellow sphere’s death, rebirth, and death again, until it is finally released from its torment. Occasionally, there is sweet fruit. 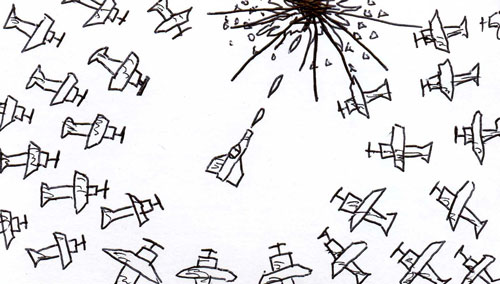 A machine curiously goes through time to kill other machines. When it kills enough machines, it goes further into the future to kill even more. It is as if the machine wishes to kill those that are different from itself, and not just through one period of time, but through now until eternity, as if the machinese represent some part of himself that he hates and desperately tries to get rid of, as a man will oft to do as he proceeds through his own life, grown more bitter and full of self loathing, until he cuts off the pieces of himself that make him human, eventually leading to a mutilated damnation. I do not understand anything about this. 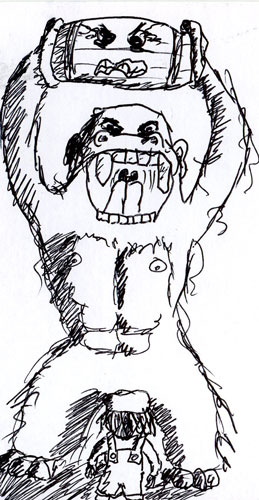 An Italian tradesman has his Swedish mate stolen from him by a giant ape-like beast with the strength to bend metal and fling heavy objects. The Tradesman must battle this beast by climbing a maddening series of ladders, all the while having avoiding various hazards – barrels that move down ladders and fly through the air as if possessed, ziggurats that bounce quickly in a maddening pattern, hot pies of brimstone from Hell’s own furnace, and the very living fire of Hades itself. If the Tradesman dies, he goes to Heaven. If he lives and manages to get through the tests without losing his sanity, the Tradesman drops the beast from the top of scaffolding and crushes his brains. 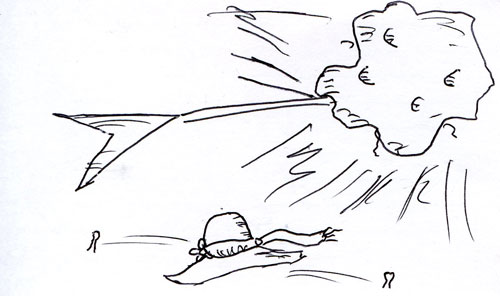 An abstract piece of art in which an arrow flies around breaking all that is malformed into smaller and smaller malformed pieces until they are dissolved into the ether. If the arrow even touches the malformed pieces, it breaks up out of its disgust for the putrid. Also, windblown hats will be thrown into the melee, debris flinging haphazardly from them and destroying all in their path. The hats made for women are exceptionally deadly. If all seems desperate, button can be pressed whereby the arrow travels into dark places unknown only to reappear seconds later where it is likely to be destroyed, not unlike a man consuming opiates to escape from the suffering of life. He consumes the opiates, only to reappear in a sober state in a time and place not of his own choosing, shortly before a carriage crushes him violently under hooves and wheel. 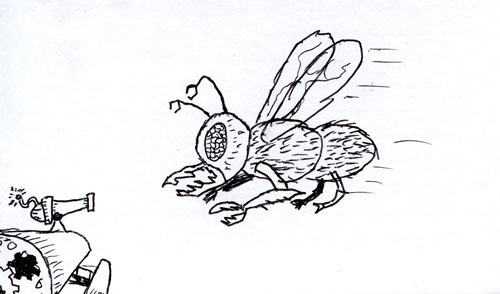 An automated steam cannon is hurled into the heavens where insects seek to devour it. The insects are immense, the size of horses, and fly in formations deliberately meant to drive a person mad. The insects fly in an organized mass and occasionally break off in formations, twirling around, flying in impossible circles, looping from bottom to top instantly. The insects also have the ability to spit boulders, which can smash the cannon into pieces. The chances for survival are minimal. All one can do is shoot endlessly until they are dead. Occasionally there is a chance to simply shoot your enemies for the approval of those who give points, but the points are empty and hollow. 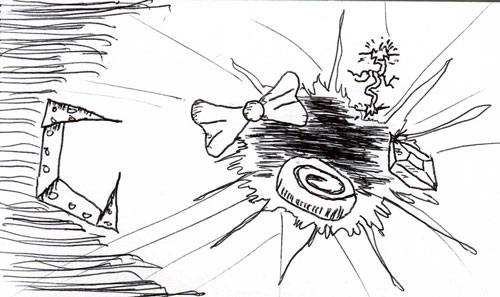 A frightening game in which a player has only a glowing sinister claw to defend themselves from the madness of everyday life. From the maddening vortex of monotony comes the bow ties of formality, the syphilis swirls of temptation, the electric spark of technology, the diamonds of accursed marriage and a ball of lost souls. All conspire to either destroy the player’s only weapon against the items of hell, or drag the player into the nightmarish doldrums of the real world. Occasionally one can press a button and call upon God to destroy all of one’s enemies, but God only wills the destruction for limited amounts, for God is on the side of damnation, of which there is no escape. One can travel across the stars for a brief time, only to find themselves confronted yet again. 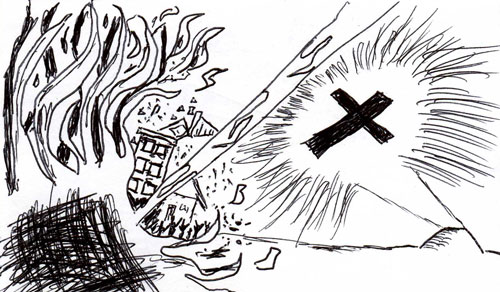 From the pit of the earth you command the Devil himself, trying to stop the very power of God from smiting a series of sinful cities. Using a blasphemous version of the cross you direct brimstone and hellfire to destroy the heavenly bombardment, trying desperately to save the cities of decadence and desire. Every city that survives the wrath of the almighty for a time gains you power. The difficulty increases, however, as God gets more and more angry as time passes and throws his heavenly rage down faster and calls on the assistance of his Angels to assist. Eventually, Satan loses and the cities burn in the cleansing fire. The screen blows up in a fitting “The End” implying the horrific death that awaits us all. 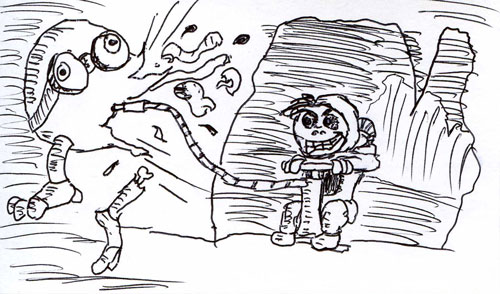 A government agent digs into the earth and proceeds to execute the native, peaceful life within in a horrific manner as dictated by the state. The beings are struck with a harpoon, and are inflated by the man with a pump until their guts burst and their skin ruptures, spewing forth their insides. The man also gets the creatures to chase him, at which point he lures them into a trap by which giant rocks will fall on them, crushing them utterly. The beings can kill the man, as per their nature, either by simply getting close enough to savage him, or in the case of the flaming beasts, they may breathe fire upon him. Eventually all the creatures are exterminated but one, the last one making a desperate rush to the surface to escape death. Sometimes there is escape for the creature. Other times there is but horrific death by internal rupturing. Occasionally there are bitter vegetables. 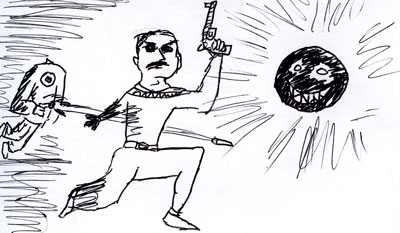 A man with a gun cannot rest. Headless men with rotating eyes in their chest shoot at him at every turn shouting in horrible mechanical voices and delight in his destruction. A bouncing ball with a face cruelly implying happiness will hunt down the man if he stops to res
t in one room for too long. He can not even rest against a wall, for they are electrified. The only defense the man has is a gun, which he can use to shoot the headless men, but it is completely futile. His death is inevitable. The only sensible thing to do in this game is to kill the man so he can rest in eternal slumber.

A man awakes to find himself as only a head with no arms, covered in orange fur. His legs are but the calves with feet; there are no knees. His mouth is gone, the only feature on his face being eyes, four times the size of normal human eyes, and a large snout. The man attempts to speak, but can only say strange mechanical grumblings. He is chased by a snake relentlessly on a board of Hell, where like Sisyphus he must continue to make squares a different color by hopping on them until he dies. Occasionally, testicles fall from the top, with either gangrene, sores, or anoxia. If the gangrenous one is stepped on, then God grants a reprieve from death as it was the appropriate medical action. The one with sores causes instant death as it pops, sending pus into the veins. The purple one reveals a snake who will chase the man relentlessly until he jumps to his death, is bitten to death, or tricks the snake into jumping to its death by jumping on a flying lollipop. A triumph of reality.