If role-playing games have one thing in common, it’s that almost all of them use specialized dice. You know, the
kind of dice you won’t find in casinos; the dice with more (or less) than six sides; the dice that you might carry in an elaborate leather pouch; the dice that cause your parents, classmates and even some fellow nerds to look at you with disdain. Unfortunately, these people have a point — there is a fine line between dice being “special” and
dice being “retarded.” Here now are ten of
the dumbest dice ever constructed for role-playing games. 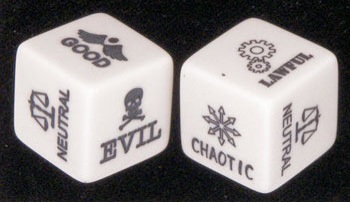 These dice help you decide on alignments for characters or NPCs. However, if you are too lazy to use your imagination to decide what alignment a character might be, then maybe role-playing isn’t for you. If you can’t make in your choice in your head whether Grongor the Dwarven Fighter likes to save women and children or save women and children for dinner, then I think the whole “story-telling adventure” thing is too taxing for you. You should just load up your Call of Duty 4 on the Xbox and enjoy not having to worry about coming up with complex narratives. Just shoot and call other people “fagtards.” 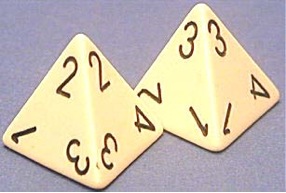 Yes, the D4 is pretty standard to role-playing games, but with its pyramid shape, it is also stupid. Unlike a real die, t is not something you can actually roll. It is more like a die you flip in the air in anger. Try to roll it, and it slides, as it is too lazy to actually be a real die. If it falls on the floor and you forget about it, it lands so that it’s very easy to get a corner jammed into your foot. It even has the nickname of “caltrop” for this purpose  I think any die with a nickname that matches a ninja tool is not something you should be playing with.

“Hey, throw one of those shuriken die around the table, will ya?”

So, with all the use of platonic solids in role-playing dice, someone decided that barrels were a better shape, as preferred by the great Donkey Kong. They may call these “crystal dice,” but clearly they are barrels. You would roll these dice as you would roll a barrel, which makes whatever dignity you had die a horrible death. I give them credit for making a D4 that you don’t step on, but I take away all that credit for making dice that you will pull out, show, and then be made fun of by other nerds. It’s like the leper being cast out of the leper colony for being too leprous. 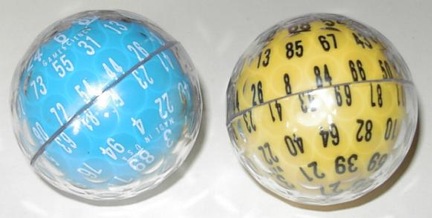 In 1985 a man named Lou Zocchi invented the 100-sided die or “Zocchihedron.” You know, because two D10s were just so damn heavy to roll in tandem. Well, this die certainly rolls — it rolls and rolls, which makes sense, because it has a hundred sides, or almost enough to become a perfectly round sphere. Good luck finding out which number it’s actually landed on.  Is it 2, or 57? You won’t know. You won’t goddamn know because the die rolled off your table. The D100 almost has to rolled in a box, or the padded cell that you should be kept in if you insist on using this. I think any die that needs an enclosure isn’t a die, it is a pet for the insane. 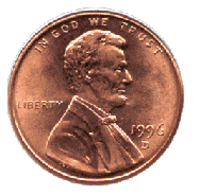 In some cases, a D2 is noted in a role-playing system and should not be noted as such ever at any point at all. It is, after all, just flipping a coin. You don’t need to be so anal that you have to use “D” notation for everything. You might as well start wearing top hats and monocles and sip your tea while saying “My good Dungeon Master, permit me the pleasure of checking for initiative in this crypt of ill repute.” Ah, but something is amiss in such elitism! What happens in the rare occurrence when the coin lands edgewise?  When that happens, what do you do then, kill yourselves? Surely your Gods are false ones! 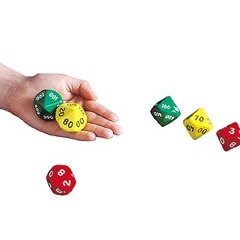 No, this is not a die with a thousand sides, though I sincerely hope someone does in fact make a die with a thousand sides as the image of a grapefruit-sized die rolling around a table makes me chuckle. No, this instead is rolling three different colored ten-sided dice, with each color assigned a digit. The digits generate a number from one to a thousand, with 000 equaling 1000. This is also insane. Really, the justification for doing this is for very large probability tables. Except, then you start getting into variations that minute, you’re not really role-playing anymore, you’re just ramping up to do statistical mathematics. Might as well start lashing a bunch of PlayStation 3s together in a supercomputer cluster at that point to start doing complex mathematical calculations of wind speed affecting the trajectory of dragon breath. At least you’ll be doing something other than use a Playstation 3 for a Blu-ray player, which is all the damn thing is good for. 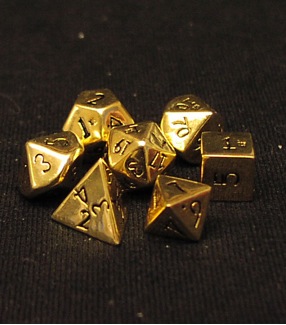 Let us be quite clear. No matter how much you spend on your polyhedral dice, there is no way they are going to make you look cool. Sorry. As soon as you whip out a bag of dice of any sort your nerd status shoots up like Old Faithful. Pulling out a bag of dice made of gold only increases that aura by an exponential, blinding level that gets into your brain and makes you retarded. For those who might revel in that fact, let us take note that with the price of gold being what it is, and nerds not being known to be good in a fight, it is very likely that a nerd and his golden die will soon be parted. Most likely with a punch to the face and a quick swipe of the dice, which conveniently comes in a pouch for easy swiping. 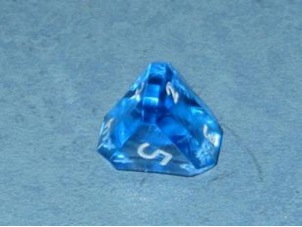 Yes. The D5. From the same person who brought you the D100 comes another die you have to stare at, not understand what it is, stare at it some more, and then still not understand it.  I’m not sure why you would need a D5 for any reason whatsoever.  You can get a number from 1 to 5 generated through its unique, completely untrustworthy shape. I don’t care if laboratory tests show this thing gives you a fair roll each time, it is the fact that it doesn’t look like it’s going to give you a fair roll is the problem. Nobody wants to play a game where it appears that it’s completely rigged; sort of like nobody wants to eat food that looks like it is rotten. Sure, tests may prove that it’s not at all, but there are other, perfectly good pieces of food to eat, just like there are other, perfectly good dice to use. Or eat. 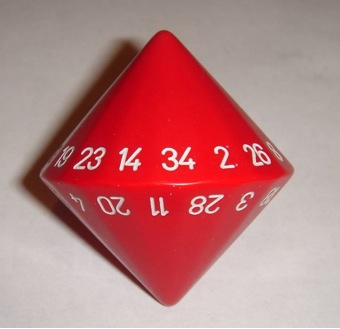 What are we doing? We have descended into madness as human beings. The D34 is a die that is pretty much tells you we’ve lost our minds. The D34 is used for calculating a probability from 1 to 34 for what kind of crazy divination/bone throwing/scientology crapshit I do not know. Maybe it is a psychological test. The first person to pipe up and try to explain in sincere, serious terms what a D34 could logically be used for we lock in a padded room. There is absolutely no reason you would want to use a D34 or even multiples. Clearly the
person who designed these dice is one of the Illuminati, sitting in a rent-controlled apartment in Des Moines, occasionally stuffing a live mouth into their chops while humming the tune to Spencer for Hire. 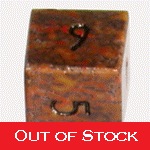 A Sauropod roamed the Earth and met an untimely demise. Due to a highly improbable series of events its bones fossilized. Then, it had the highly improbable good fortune to be found by we humans millions of years later and even more good fortune to be correctly identified and categorized by trained experts. Then it had the incredibly bad fortune of someone saying, “LET’S CHOP THIS BEAUTY INTO DICE!” Yes, a dinosaur fossil was made into a D6. If you had an urge to buy one of these things (and you can’t anymore because other people went insane and bought them all out) then really, what can you do with this? You can take it to a game and like a jerk say “See this D6? It’s made out of dinosaur fossil. Paid $60 for it.”  You could also not do that, and instead have the die as a display piece. Consider, though that if having a dinosaur fossil on display is impressive, then having a die made from a dinosaur is NOT IMPRESSIVE AT ALL. You’ve taken something that was, by itself, interesting and special and turned into an abomination.  It’s like inviting your friends over to look at your fireplace and saying “Hey, check out this fire, I used the Mona Lisa for kindling. Paid a billion dollars for it.  Neat, huh?”