He-Man and the Masters of the Universe might not be the greatest toyline of all time [Ed.’s note: they are, actually] but you cannot deny they had the greatest variety of action features. Each new hero and villain had their own crazy gimmick that set them apart from all the other characters, ranging all the way from three rotating eyes to a massive suction cup mouth to a guy who could split in two, even though that didn’t seem like that would be particularly useful in a fight. In Master of the Universe, toymaker Mattel created some of the most fun figures known to man (or He-Man, for that matter) and a toyline that was, in its day, even more popular than G.I. Joe and Transformers — no small feat. Here are the 12 most awesome, innovative action features that made He-Man toys the masters of the 1980s playroom. 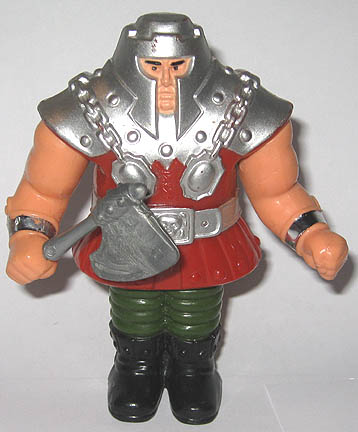 The first wave of Masters of the Universe figures were just figures, such as He-Man, Skeletor and Man-at-Arms. In 1983, the second wave arrived, and no figure epitomized the action feature-heavy future of the toy line more than Ram-Man. Sure, his feature was pretty simple — press his torso down, then hit a button to have him ram his enemies — but it was so intrinsically awesome no one noticed what a shitty figure he was for years. Plus, his name was the source of much bemusement on the playgrounds of the ’80s.

While Skeletor was busy making He-Man robots that were blue, Man-at-Arms was busy creating Roboto — a robot with swappable arm weapons (much like Trap-Jaw) but more importantly, with gears inside that actually moved when Roboto did! Sure, there were maybe four gears in him tops, but they were cunningly placed to make it him look incredibly detailed and technical. And it was the ’80s, so we were pretty easily satisfied. 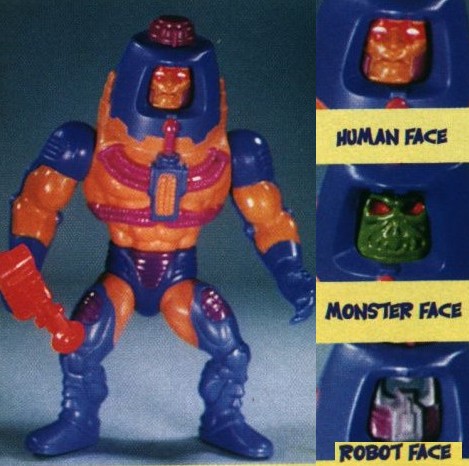 Man-E-Faces’ action feature might not have been as dramatic as spinning punches and the like, but it was certainly cool. With the twist of a knob, his face would change between a human, a green monsters and a robot, essentially giving kids three different toys with different personalities and powers (at least according to the back of the packaging and our fertile imaginations). Now that’s value. 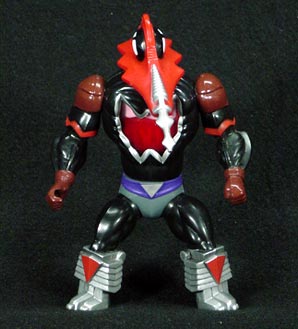 This member of the Evil Horde had an action feature that was awesomely horrid and vivid. He had a giant, metal proboscis that allowed him to refuel by jabbing it into our unfortunate heroes. And you could watch in disgust and dark amusement as his chest filled up with the blood of his victims, thanks to pumping action activated by a button on his back! A vampiric robot that ran on blood was a pretty original, frightening concept even today. 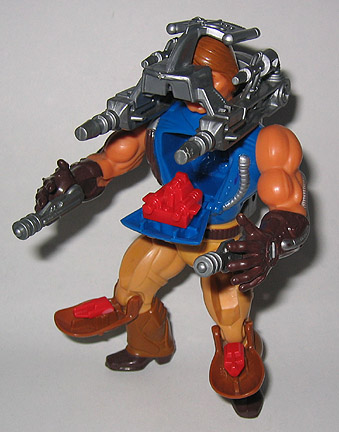 You can mock his Chuck Norris-esque mustache all you want, but the fact of the matter is Rio Blast was a badass. Well before Robocop, Rio Blast had turned his body into the ultimate weapon, and had guns implanted in both arms, both shins and his chest, and then had a another gun just in case. Sure, he looked kind of like BraveStarr, but none of Skeletor’s henchmen ever carried firepower like this. 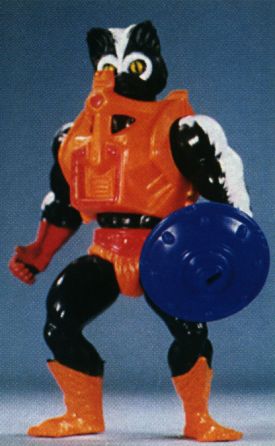 What made Stinkor so awesome was that his secret weapon was something less tangible, but more powerful than the biggest spring-powered battle axe. True to his name and nature as a skunk, Stinkor STUNK. It was so bad that he had to wear a mask since even he couldn’t stank his own foul odor. Stinkor’s magical scent was created by mixing patchouli oil into the plastic and, almost 25 years later, most Stinkor figures still retain their toxic aroma. Alas, the same isn’t true of Stinkor’s heroic counterpart Moss Man, whose fresh pine scent disappeared somewhere in the early ’90s. 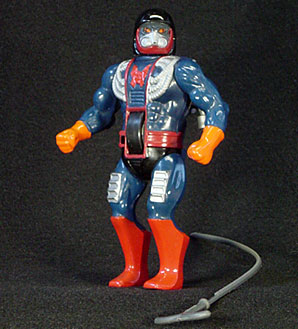 Part car and part monster, Dragstor used the old racing car toy gimmick of ripcord action to great effect. When the good guys tried to run from him, this Evil Horde henchmen would flop down on his belly and zoom after them thanks to the wheel on his chest. Sadly for today’s collectors, racing around on his face caused paint wear. Also, it was almost impossible not rev Dragstor’s wheel up as fast as it could go, then put it on your little siblings arm to create the mother of all burns. Thus, Dragstor was often confiscated by angry parents who had no need for speed. 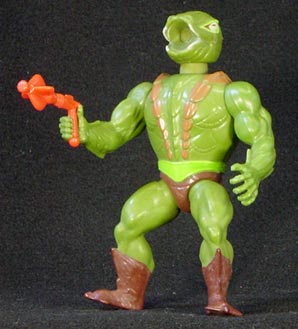 Kobra Khan was sort of a prototypical member of the Snake Men, showing up on shelves two years ahead of his scaly brethren. You could rip off Khan’s head, which was pretty damned freaky but not the action feature in itself. No, his head came off so you could fill him with water, put his noggin back on and then spray “hypnotic mist” from his mouth at his enemies like he was a green, reptilian spray bottle. Kobra Khan is also useful if you feel like enlivening your window-cleaning routine, or, storing vodka in if you worked at a professional toy magazine (cough).

While some toylines made a big fuss about action figures that twisted at the waist and simulated punching action, that was standard fare for the Masters of the Universe. Mattel therefore outdid themselves whenever they came up with a way to make automatic punching an even bigger deal. The most explosive example of this was Thunder Punch He-Man, who not only twisted to deliver a crushing blow, but also used BANG! Caps inserted in his back to deliver an even more impressive clobbering! Not to mention a great deal of smoke from He-Man’s backpack. Kids always felt like they were getting away with something when they got to use near-fireworks, too. 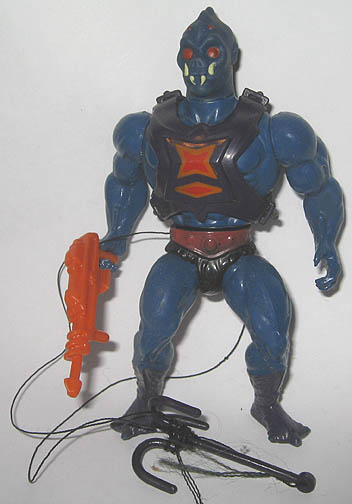 The creepy, spider-like Webstor had a grappling hook, which would have probably been enough for this list — every kid in the ’80s wanted a grappling hook. But once you attached the grappling hook on to something, and started pulling the string, the evil Webstor climbed up the rope by himself. It is 2009, and I still don’t know how this works. I am very content with it being magic. 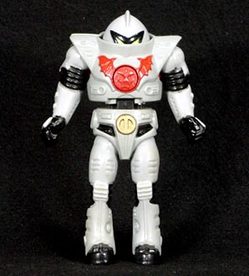 Curses upon Mattel for letting such an awesome figure be so damned rare! These robot soldiers looked a bit like Stormtroopers from Star Wars and could be dramatically defeated. When He-Man slammed his fists into the Horde symbol on the minions’ chests, they would collapse in on themselves, utterly trounced by the Power of Grayskull. He was easily reassembled, meaning it was a breeze for He-Man or She-Ra to beat the crap out of this or bastard dozens of times in a row. Destroying these peons never less awesome. 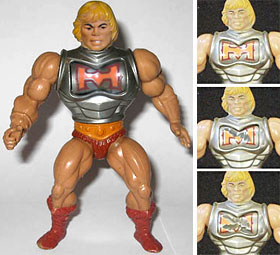 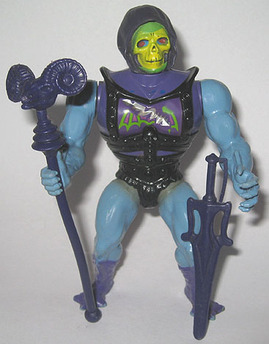 For the sake of realism, some kids occasionally had to inflict damage on their toys. How many G.I. Joes suffered a firecracker-induced fate? But Mattel allowed kids to witness some of the requisite damage their toy battles should inflict with the introduction of Battle Armor. As Skeletor and He-Man engaged in combat, striking each other’s chest armor would cause the wheel inside to flip and show the armor, now damaged with one slash! Hit it again, and the armor suddenly had two slashes. And then it could be reset to allow for infinite punishment. As one of the first toys that actually replicated damage, this brought a whole new dimension to action feature combat, and made all those imaginary fights infinitely more worthwhile.