A video game’s ending is a delicate thing. While it can go
anywhere, it has one requirement that sets it apart from the conclusions of
books, movies, and other narratives: a game’s ending should be a reward of some
kind. It’s only fair to the player who’s just spent hours and hours hopping on
goombas or grinding levels by killing desert rats. Woe to the designer who just
slaps in a cheap “CONGRATURATIONS” screen after many hazardous mazes and frustrating
bosses. Mistakes like that live forever in disgrace, right next to Karnov.

There are, of course, endings that completely screw with the
player’s expectations, and they’re most effective when no one sees them coming.
It’s one thing to have an insane twist at the close of a game full of insane
twists, but it’s quite another to cap off a happy exercise in jumping and
coin-collecting by showing the Mushroom Kingdom firebombed into oblivion. We’re
discussing eight of the most memorable mindfucks in game history below.
Spoilers abound, and we stuck to American-released games so as not to ruin,
say, that part at the end of Sakura Wars
where half the characters turn into archangels for no reason.

Considering how Goichi “Suda51” Suda’s brain-melting Killer 7 turned out, we would’ve been
horribly disappointed if his subsequent game, No More Heroes, had lacked a weird, confusing, laugh-at-the-player
finale. Fortunately, it had one. After disposing of many elite assassins and
his own half-sister (itself a player-freaking experience), otaku hero Travis
Touchdown finds himself in this little situation.

It’s in keeping with the spirit of No More Heroes. Mostly. The game’s story sticks close to the real
world than Killer 7 did, and it’s
defined by gory self-riffing that never quite spells out whether it’s making
fun of nerds like Travis or modestly celebrating them. It’s probably the
former, considering that he’s on the toilet a lot. Then there’s the art-gallery
dissolve, which we’d compare to St.
Elsewhere‘s last episode if we thought that Suda51 was being serious. The
biggest joke here? There’ll be a No More
Heroes sequel, but not until 2010.

Before Jordan Mechner brought us the Prince of Persia franchise, he gave the Atari generation a lesson
in manners. Karateka, his 1984
martial-arts game, has a gi-wearing whitebread hero getting into one-on-one
fights with various martial artists and birds. He eventually rescues a princess
named Mariko from an evil lord named Akuma, who dresses not like a demonic
street fighter but rather like he’s got the title role in a community-theater
production of Gilbert and Sullivan’s The
Mikado.

Theatrical or not, Karateka‘s
fights all require the player to switch from a run to a combative karate pose.
Once they’ve beaten Akuma, most players just run into Mariko’s cell, where she
waits with outstretched arms. But what happens if you approach her in your
battle stance?

THAT happens.?
Remember, this was 1984. There were no passwords, no save slots, and no
respawn points in games like Karateka.
There was only a princess ending your entire game because you lacked a certain
courtesy.

Cyber-Lip is proof
of just how valuable a twist ending can be. It’s a Contra-style Neo Geo shooter that does nothing of note: you’re a
generic commando dispatched to a city where you gun down soldiers and a
creepily phallic boss or two. Then you destroy the eponymous super-computer and
set everything to rights. 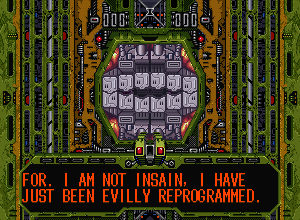 I have? Well, that’s a relief, because that computer was
telling me… 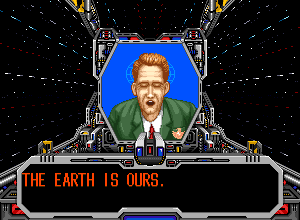 Wait, I thought we were fighting for the… 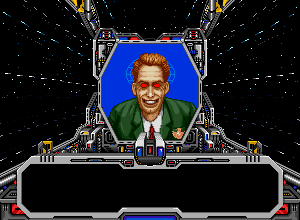 It might be a cheap turnabout, but players would remember
that part of Cyber-Lip at the very
least. And when you’ve shoved over five bucks into a Neo Geo arcade machine,
you deserve to come away with something.

The Internet still loves to argue about Final Fantasy VII nearly twelve years after its release, which is a
compliment in some backhanded way. Most of the game’s controversy centers on
whether it’s a solid, groundbreaking RPG with somewhat dated graphics or a
mediocre, vapid mess with severely dated graphics. Yet there’s one part of the
game that was obviously designed to get players bickering over the actual plot.

To recap: at the game’s end, a giant meteor is barreling
down to extinguish? all life on the
planet, and only a magical spell called Holy stands in its way. Holy doesn’t
quite work when the big rock comes down, but the planet’s glowy lifestream
fairy-essence-stuff flows out to help. Then it’s the future, and the game’s
least human main character, the dog-lion Red XIII, and his two dog-lion kids
scale a cliff to look upon the ruins of the city of Midgar, now overgrown with
plants.

So what happened to all of the people? For years after the
game came out, fans wondered if the epilogue implied that the human race was
saved or if the planet just saved itself and wiped out all of those evil, polluting,
nitrogen-farting humans. Some players, unwilling to accept an ambiguous ending,
discovered the horrible world of fan fiction by writing their own gushy,
embarrassing conclusions, with weddings and angst aplenty. Square stepped in
eight years later and made the movie sequel Advent
Children, which started off with the same Red XIII scene (which was
centuries in the future) and then showed that everyone was still alive a few
years after the game’s ending. Not that this stopped the fan fiction.

Conker’s Bad Fur Day‘s grasp of comedy is up for
debate, as much of the humor falls between references to Kubrick films and a
giant fecal pile who sings about his chocolate starfish. Yet Conker’s Bad Fur Day at least wants to be a comedy, and that’s
reinforced by just about everything in this cutesy animal platformer gone
violently astray. Even the exploding, diarrhea-afflicted cows are supposed to
be funny. This makes the ending’s dark little rider all the more jarring.

Yes, after the Alien
stand-in is crushed under the rubble of the game’s fourth wall, there’s a
little reunion among the game’s goofier denizens. In the middle of it all,
Conker remembers that his girlfriend is, well, still dead, and that she’s going
to stay that way thanks to his absent-mindedness. Funny? In an ironic British
way, perhaps.

Years before video games had fully realized plots, they had
plot twists. And Phantasy Star II has
some of the most memorable plot twists found in any game from the 1980s. It’s
set in the distant Algol solar system, where a bounty hunter named Rolf
investigates problems in the multi-planet computer network known as Mother
Brain. Along the way, the game’s most memorable character meets a sudden end,
an entire planet explodes, and everything is set up for a decisive battle with
the Mother Brain and the evil force possessing it. But it just so happens that
there’s yet another evil force waiting.

Yes, the Algol star system’s Internet was run by Earth
refugees, who have apparently been plotting and standing in stiff lines behind
the scenes for centuries. And now you’ve got to fight a hundred of them in a
big, climactic rumble. All of your allies show up, everyone spouts angry
taunts, and then…well, that’s it. Cut to the credits and a lot of open
questions about whether or not you actually won. Phantasy Star IV‘s setting strongly suggests that you did, but
you’ll never know just what happened to Rolf and the rest of the characters you
shepherded through a long and difficult RPG.?

Drakengard wants
to make you uncomfortable. Among this action-RPG’s efforts toward that end:
setting itself in an ugly medieval wasteland, staging grueling battles against
hundreds of screaming foes, giving you a boring thug of a hero to control, and
suggesting that said hero’s sister wants him in a manner illegal in all
right-minded countries. Hacking through countless enemies and sitting through
gruesome cutscenes brings you to several possible endings. The second most
surprising one involves a fleet of giant naked dollar-store baby dolls.

That’s… uh… that’s something you probably won’t see in the
next Final Fantasy or Half-Life. Another ending has the hero
and his dragon ally chasing the boss to present-day Tokyo, thus giving the
Japanese Self-Defense Forces something to do.

The original Monkey
Island and its sequel were never above surrealist humor or modern
references. In fact, that helped make the games as endearing as they were. There
was a certain grounded realism to Guybrush Threepwood and Elaine Marley’s 17th-century
pirate adventures, so it was amusing when the game made wink-and-nod
acknowledgments of Ghostbusters and
battery acid. This approach goes a little awry at the end of the second game, LeChuck’s Revenge, when Guybrush
plummets down a hole, meets the antagonistic LeChuck and…well, ends up
somewhere strange.

In truth, it’s a clever way of messing with the player.
Guybrush is sent on a weird chase through the septic-system underground of
Monkey Island, and it turns out that he’s not just LeChuck’s brother, but his
brother in a world where the two of them are boys visiting a modern amusement
park with their parents. Only at the end of the game do we get some implication
that it’s all just a spell cast by LeChuck. The
Curse of Monkey Island, the third game in the series, brought Guybrush out
of the underground somehow, but it did so without Ron Gilbert, the creator of
the first two Monkey Island games. Gilbert
left the series after the second game, and until he comes back to it, the true
meaning of that amusement park will be left up to the player’s imagination. Sometimes
that’s how things should end.