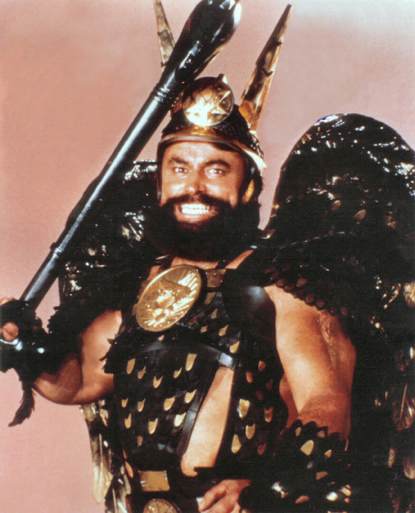 He also might be playing Odin in the Thor movie, according to Bleeding Cool. You know Blessed — he was the boisterous Vultan in Flash Gordon and the boisterous and insane King Richard IV from Blackadder. Frankly, I will always love him dearly for his amazing performance as Augustus from I, Claudius (I’m a Latin and Classics nerd, sue me), so I’m utterly thrilled by this. Few people have the presence to pull off the King of the Gods, but Blessed does easy.

I know some of you are arleady furiously typing about how these Norse gods will have British accents, but… they will. But that’s not Marvel or director Kenneth Branagh’s fault; it’s America’s. A British accent isn’t just for villains (like in Star Wars, but it is our default “foreign” language, which is most big movies set in foreign countries — like the recent Defiance — usually cast British actors. It gives off an essence of “foreigness,” without having to resort to subtitles. As a big summer action flick, there was never any fucking way anyone in Thor would be speaking Norwegian or even with a Norwegian accent. Sorry. You’re welcome to be furious — on behalf of Norway, I guess — but you’re lucky we’re getting British accents, in all honesty.