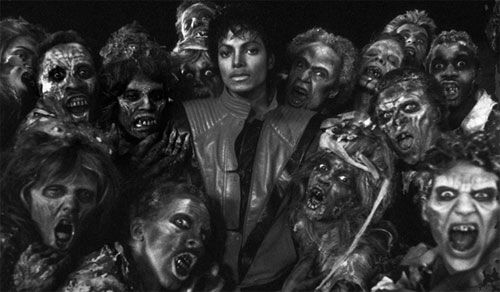 Michael Jackson died yesterday of cardiac arrest at the age of 50, and I’m freaked out. If you weren’t cognizant in the late ’70s/early ’80s, it’s impossible to explain what Michael Jackson was to not just to music but pop culture, because he was a lot more than a singer, and a lot more than a celebrity. To try and put it simply, he was a star in a way that no one since has been, someone who everyone in the world knew, whose work — which is absolutely phenomenal — virtually everyone in the world enjoyed. And then he fell. And no matter how bizarre he got or what horrible crimes were hinted at, the horrors of his own upbringing served to make him and his whole situation unbelievably tragic instead of someone to be vilified.

As the King of Pop, he had an indescribable impact of pop culture; he’d deserved to be memorialized for the “Thriller” video if nothing else (of which the coolest fucking picture in the world is above, found by and shamelessly swiped from Geek Orthodox). Since you’re going to be hearing and seeing a ton of Michael Jackson music videos today (and probably watching “Thriller” or Moonwalker clips on all the other nerd sites) I figured I’d show you this:

A little known cameo by MJ in Sega’s Space Channel 5 games, where he plays — I shit you not — Space Michael. I can honestly say I hope this is where he is — and what he’s wearing — right now.